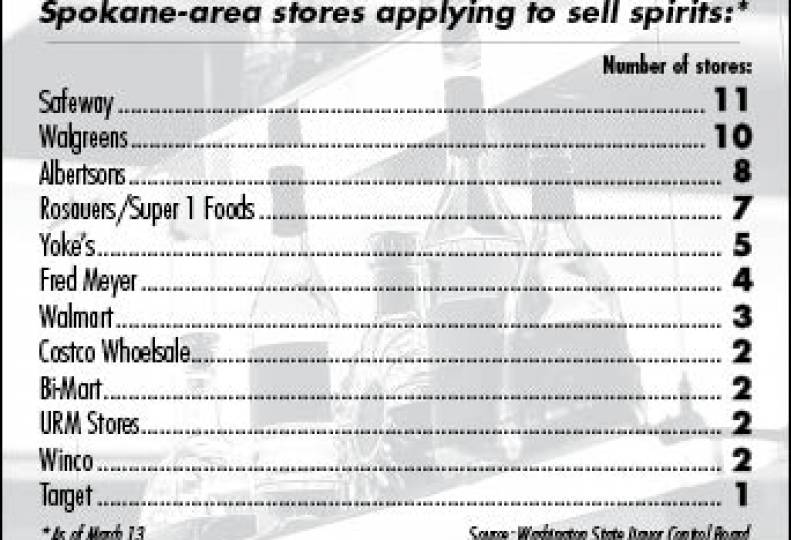 Dozens of Spokane-area supermarket chain stores and other independently-owned outlets are applying for licenses through the Washington state Liquor Control Board to stock their shelves with spirits by June 1, the date on which liquor sales in Washington will become privatized.

Last fall, voters across the state approved Initiative 1183, which privatizes liquor sales in Washington and allows retailers with a minimum of 10,000 square feet of retail space to sell spirits.

Since the beginning of this year, a total of more than 75 retailers in the Spokane area have submitted paperwork seeking approval to sell liquor, and those numbers likely will continue to grow. Some of those stores already have received the state approval.

Also, it shouldn't come as a surprise to consumers that Issaquah-based Costco Wholesale Corp. has applied through the state to sell spirits at its two Spokane locations, at 7619 N. Division and 5601 E. Sprague. Costco reportedly spent $22 million to help pass I-1183, which was a state record for initiative-related financial support.

Spokane area-based retailers that have applied to the Liquor Control Board to sell liquor at multiple locations include Rosauers Supermarkets Inc., URM Stores Inc., and Yoke's Foods Inc.

WinCo Foods, based in Boise, Idaho, also has filed to sell liquor at its two stores here, on the North Side and in Spokane Valley.

Jeff Philipps, president and CEO of Rosauers Supermarkets, says all 13 of the company's Washington stores will be adding spirits to meet the June target date. That includes a total of eight stores in Spokane, including a Super 1 Foods store at 830 E. 29th, in the Manito Shopping Center, and Huckleberry's Natural Market, at 926 S. Monroe.

"We have gone store by store to determine where we have room to carve out for spirits, some within the beer and wine area, and some space that's been taken out from other areas of the store," Philipps says.

He says he's not sure how much of an increase in sales the company can expect to see when its Washington state stores debut spirits.

"All of our stores will have spirits—our decision to do that is to make sure we are competitive in the market and to protect the jobs of our employees," he says. "Our plan is to carry the needs and wants of the customers, but we want to differentiate the selection from other retailers by focusing on locally or regionally produced products."

In an interview with the Journal last December, Gary Morgan, a part-owner of Spokane-based Trading Co. Stores, which operates three stores in the Spokane area, said he couldn't imagine the company's Washington stores not carrying liquor. However, as of earlier this week, a state listing of applying retailers across the state didn't include Trading Co. Stores.

Morgan couldn't be reached before press time to comment on the company's plans.

Yoke's Fresh Market recently applied to sell spirits at all of its nine Washington stores, including locations in Deer Park, Airway Heights, Spokane Valley, Mead, and the neighborhoods of North Foothills and Indian Trail, in Spokane.

Other stores that are seeking to or have been approved to sell liquor starting in June include a Cost Plus World Market store, at 6125 N. Division, two Spokane Valley Hico Village stores, and a handful of smaller independently-owned grocery stores.

A yet-to-open Total Wine & More store, a Potomac, Md.-based retail chain that operates nearly 80 storefronts across the country, also was listed as a recent spirits license applicant for an outlet at 9980 N. Newport Highway in the Northpointe Plaza.

State records show that a total of 11 state-run liquor stores are located throughout the greater Spokane area, and those stores employ an estimated total of 64 people.

The Liquor Control Board started auctioning off the ownership rights of all 167 of its liquor stores on March 8, and bidding is schedule to close on April 20. The auction is being run online at www.publicsurplus.com.

Successful bidders then would need to apply for liquor licenses and negotiate leases for the stores since none are located in state-owned spaces. If unable to negotiate new leases for those locations, the successful auction bidder or bidders could seek to relocate the store within one mile of its former location, if granted permission by the Liquor Control Board, the agency's website says.

Auction rules wouldn't prevent a successful bidder of a state-run store from closing it, and the Liquor Control Board also can't prohibit large grocery chains that are planning to sell spirits from bidding on one or multiple state stores and doing the same.

As of March 13, the auction site for the state-run liquor stores showed that all 11 of the stores in the Spokane area had received bids, and several showed multiple bids. All of the state's stores started out with a minimum bid of $1,000, and seven stores here each had one bid at that price.

Several of the spaces across Spokane that currently are occupied by state-operated liquor stores already have been listed to become available for lease in June by the commercial real estate firms that manage those spaces.

The Washington state Office of Financial Management has estimated that licensing fees and annual renewal fees related to the privatization of liquor sales could generate a net increase in state revenue of $216 million to $253 million during the first six fiscal years. Local governments could receive an additional $186 million to $227 million during that same period.

The city of Spokane would receive between $7.2 million and $8.8 million in new revenue, and $2.1 to $2.5 million would go to unincorporated Spokane County.