A home for HOPE

Organization moves to its own space in medical district 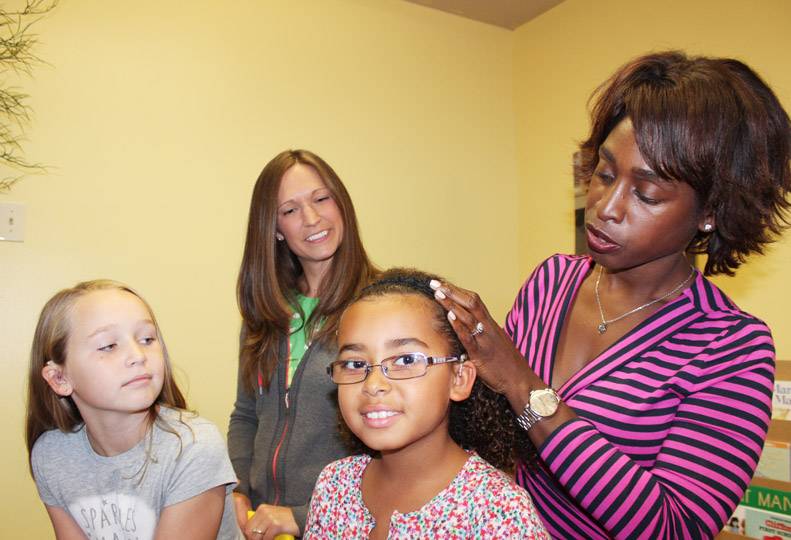 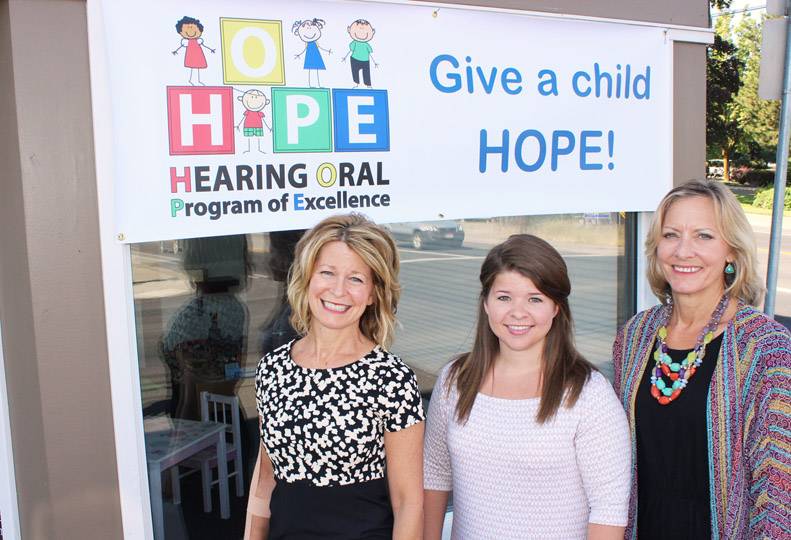 First launched in 2004, the Spokane Hearing Oral Program of Excellence (HOPE) has relocated to larger quarters at 502 E. Fifth, moving from shared space in the University District east of downtown Spokane.

“We’re the only listening and spoken-language program in the region for children who are deaf or have hearing loss,” says Danette Driscoll, HOPE executive director. “Our mission is to teach children with hearing loss how to listen and speak so they can be successful in our hearing world.”

With an annual operating budget of $400,000, HOPE doesn’t receive any medical insurance reimbursement, so funding sources include money from local school districts, grants, donations, and its fundraiser, Hoedown for HOPE dinner and auction, which this year is Sept. 30 at the Spokane Convention Center.

HOPE serves about 50 children each school year through two early-learning programs and its preschool.

For the 16 students involved in HOPE’s preschool, Spokane-area school districts contract with HOPE to cover the cost of a student’s tuition, set at $9,000 per school year.

“The school districts realize the benefit because the HOPE graduates come back to their school district ready to enter a general-education kindergarten class with little if any additional support needed,” Driscoll says.

Its Birth to 3 In-Home Therapy Program offers services from initial diagnosis, says Driscoll, who adds that children can be diagnosed with hearing loss at birth with a state-required newborn hearing test.

HOPE also has a weekly toddler-and-parent program at its center for children 18 months to 3 years old to develop social, emotional, and collaborative learning. Meanwhile, the parents network about their shared experiences.

Driscoll says, “Spokane is one of the smallest cities in the country to have a program like HOPE, and it’s because the Spokane community supports the financial needs through grants, and individual and corporate donations.”

Children supported by HOPE services can hear with devices, which can include hearing aids, cochlear implants, or what’s called bone-anchored hearing aids. Those devices assist them in experiencing speech sounds to begin learning language, in some cases before the age of 2.

Rising in use are cochlear implants, which are complex electronic devices that can provide sound perception to someone profoundly deaf, or hard of hearing, through direct electrical stimulation of the hearing nerve, bypassing damaged portions of the inner ear. It requires surgery to implant.

A cochlear implant includes an external portion that sits behind the ear and a second portion surgically placed under the skin. An implant has parts that include a microphone, a sound-and-speech processor, a transmitter, a receiver, a stimulator and electrode array. The device is different from a hearing aid, which amplifies sounds.

Families often are referred to HOPE by the Spokane Regional Health District’s Infant Toddler Network. The state Department of Early Learning and Office of Superintendent of Public Instruction provide funding that covers HOPE teachers of the deaf in-home services, so families don’t have to pay, Driscoll says.

Other referrals to HOPE are from Spokane Guilds School, which provides various therapies for young children.

The program is leasing its two-story, 1,400 square-foot facility that includes a preschool room, individual therapy room, and a learning center for small-group instruction. There’s also a gross motor room, for activities and movement, and the school is adding a music therapy program.

Nine-year-old Mia Newell, a HOPE graduate, enjoys physics and science in an international school during part of the year in Europe. Mia’s hearing loss is a genetic condition, says her mother, Dr. Luisita Francis. Mia passed a newborn hearing screening and started talking, but at around 9 months, her speech stopped.

A pediatrician and assistant dean at WSU’s Elson Floyd College of Medicine, Francis says she became concerned that Mia wasn’t meeting her speech milestones. She took her infant daughter to a pediatrician, and Mia then failed the hearing test.

Mia could only hear sounds at a decibel level of 110, the equivalent of a jet airliner, Francis says.

Before learning about what HOPE offers, she considered leaving Spokane for medical services in Los Angeles.

“All the resources actually kept us here in Spokane,” she says. She adds that HOPE also teaches children how to advocate for hearing needs. It works with families about what to do in the home, such as repeating words applied to actions and objects.

Before Mia’s cochlear implants, Francis knew about them as a doctor but hadn’t been exposed to newer technological advances.

“Now with cochlear implants, you can really pick up key sensitive sounds,” Francis says. “The frequencies heard through the cochlear implants are broader, and the external part gets updated about every five years. That’s what receives the sound and transmits to a head piece.”

She adds, “You have this window of 0 to 5 years for really significant brain development.”

Parent Kim Broers says using HOPE services for her now 9-year-old daughter Kassie from infancy greatly enhanced early language and speech development. That included in-home services from the time Kassie was a baby to preschool with a certified classroom teacher who is trained in listening and spoken-language therapy.

Broers says, “They don’t use sign language or any visual cues, and we do the same thing in the home, because we are building the auditory part of the brain during a critical time of brain development.”

Kassie as an infant could hear at about 75 decibels, “equivalent of a lawnmower,” Broers says. Her daughter received hearing aids and then cochlear implants, one at age 2 and the other at 3. She had hearing loss because the inner ears’ stereocilia—sometimes called cilia—weren’t functioning properly, Broers says. The cilia as organelles of hair cells respond to fluid motion for various functions, including hearing and balance.

Today, Kassie excels in fourth grade at Freeman Elementary School, Broers says. Her teacher wears a lanyard with a small transmitter that’s part of an FM sound-field system so the sound of the instructor’s voice goes directly into Kassie’s cochlear implants.

Kassie can hear regular conversations without the transmitter, her mother says, but it helps in case the teacher turns facing away to write on a white board or is across the room.

HOPE works on teaching children functional phrases to express what they want rather than through behaviors, along with what sounds mean, Driscoll says, “so they make connections, so that words start to have meaning. From that, children start to speak.”

HOPE teacher Samantha Schraven adds that she views the various hearing devices as opening doorways to the brain.

“The brain is really what we’re working on and developing,” she says. “You have to train the brain to understand those sounds by being in a rich auditory environment.”