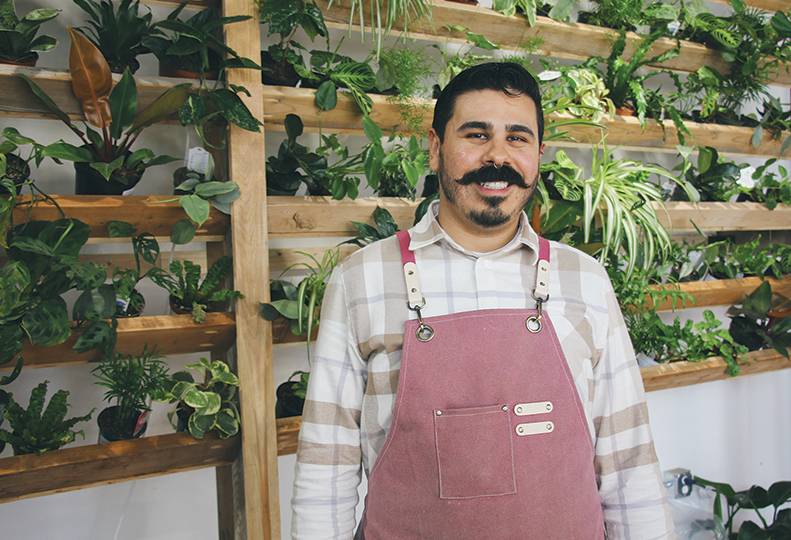 -Virginia Thomas
Dominic Villareal has opened A Modern Plantsman in the Hotel Indigo building, in downtown Spokane. The company had taken space in Boulevard Mercantile previously.

A plant shop with roots in Colfax, Washington, has established an exclusive storefront in downtown Spokane.

A Modern Plantsman LLC's original space is on Main Street in Colfax, about 60 miles south of Spokane. Villareal says he took advantage of low commercial lease rates in Spokane resulting from the COVID-19 pandemic.

"I've always thought it would be so cool to do this concept in a bigger city," he says.

The shop formerly operated out of a smaller space at Boulevard Mercantile, in Spokane.

Villareal says in addition to selling plants, he hopes to create a sense of community within the Spokane shop.

"I've always wanted to have a space where people can gather," he says.

The Colfax store has been a venue for a botany club, plant swap, and workshop events, and Villareal says he hopes to bring a similar community and events to the Spokane location.

"Before the pandemic … we'd meet up once per month, and we'd do some sort of hands-on activity," says Villareal. "We've done terrarium workshops and macrame workshops. Every time I was like, I want to try bringing this to the shop, I'd guinea pig it with the plant club."

A rainbow pride flag hangs in A Modern Plantsman's front window. Villareal, who is gay, says he hopes the shop will become an integral part of the LGBTQ community in Spokane.

"I don't feel like there's a lot of safe spaces for LGBTQ people, so I would love to do something like a drag brunch or a drag story time," Villareal says. "I think it would be cool to have live music and drinks every now and then. We're excited to be a part of the neighborhood."

Villareal says A Modern Plantsman started offering online ordering when the COVID-19 pandemic struck but has decreased its online offerings.

"We've realized that it's really hard to keep inventory for live products like plants, because there's so much variance in each product," Villareal says. "You can take a picture of the best-looking one, but then 10 of the others might not be quite as good looking. It's hard to set peoples' expectations."

"I was in a really bad job that I didn't like. I just had a breakdown one night after clocking out," Villareal says. "I was in Arizona, visiting family and seeing a Beyonce concert–as one does–and I serendipitously had gotten off the plane and went to get food with a friend. Across the street, there was a plant shop. We walked in, and it just clicked, this is totally something I could do."

Villareal had a room in his home dedicated to houseplants and envisioned a retail version.