Work on new facility expected to wrap up by this November 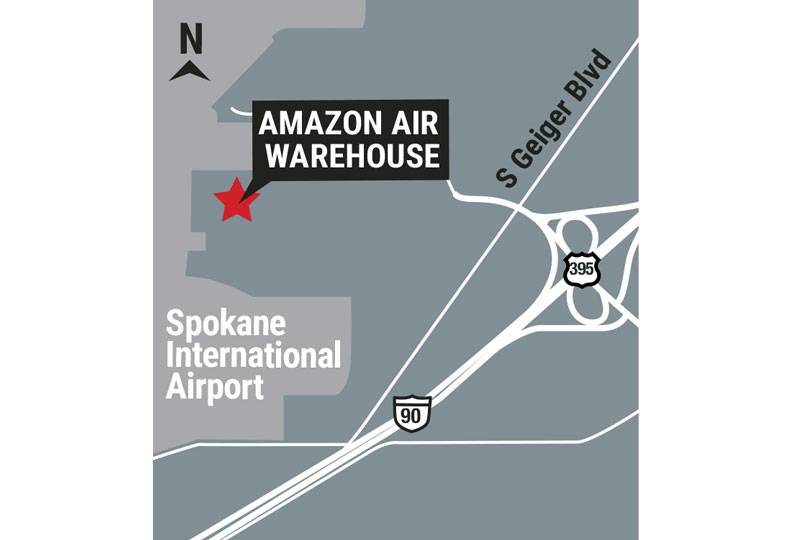 The facility will be used to transfer parcels from the airport to and from the Amazon Fulfillment Center, located just a few miles southwest of the planned warehouse at 10010 W. Geiger Blvd.

Amazon Air is Amazon’s dedicated network for delivering packages across longer distances. According to the company’s website, Amazon Air has operations at over 35 airports in the U.S.

S3R3 Solutions, formerly known as the West Plains-Airport area Public Development Authority, plans to break ground in April on the 30,750-square-foot warehouse, which will include 5,200 square feet of office space. The facility is expected to be fully operational by November.

Site plans show the one-story warehouse will have 10 truck docks and at least 90 parking stalls.

The facility is to be located just northeast of Landmark Aviation and Absolute Aviation Services and to the south of the airport, on Pilot Drive.

Garco Construction Inc., of Spokane, is the design-build contractor on the project, which has an estimated construction value of $5.4 million.

The airport is leasing the roughly 6-acre site to S3R3 Solutions, which will construct the building and sublease it to Amazon Air.

The Spokane International Airport board approved the lease at a meeting on March 19, says Coleman.

“This demonstrates S3R3’s ability to perform the third leg of the stool,” says Coleman, referring to the construction of the facility, which will support both job growth and commerce in the area. The first two legs of that stool consist of recruitment to the Spokane region and facilitating infrastructure projects to support development, he says.

The project is being financed by Spokane-based Wheatland Bank through a $5.3 million revenue bond, says Coleman.

Amazon has agreed to a 10-year-lease with the option of extending it for up to 24 additional years.

The project is just the latest expansion in Amazon’s growing presence in the Spokane area. The company also is building a 1.6 million-square-foot non sort fulfillment center at 18007 E. Garland, in Spokane Valley, which will specialize in bulk products, such as sporting goods and kitchen appliances. That facility is expected to open this year.