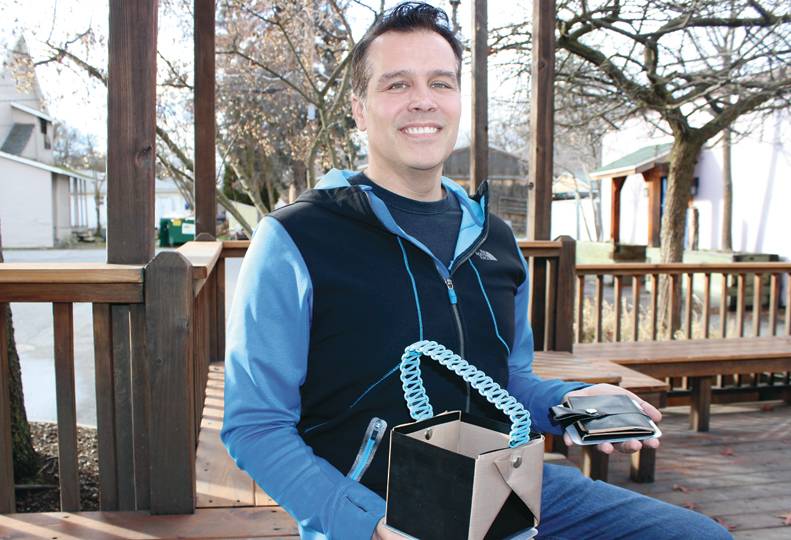 His appreciation for handy tools led Santiago a few years ago to brainstorm about developing a lightweight cooking pot, one that would open for use and then fold flat for storage. He knew an all-metal design wouldn’t have the flexibility needed for his envisioned product.

Eventually, he realized a friend of his was selling a flame-resistant material online for commercial use, and that it might work for his concept. Santiago bought some and started working on prototypes.

The result is Bear Minimum, Santiago’s venture through www.bearminimum.org for the lightweight cooking pots, called Bear Bowls, that he manufactures. They range in capacity from 32 ounces to one gallon.

“I have an interest in survival as a hobby,” says Santiago, 47, a Spokane resident. “It really comes from the absolute love of cool gear. This was cool gear that wasn’t there, so I developed it because I wanted it.”

Bear Minimum, as a play on words, alludes to being outdoors and taking a minimalist camper approach: Take the bare minimum.

“The way I’ve designed the bowl allowed it to be folded up the smallest way possible, and it contains all the corners and folds flat,” he says.

He adds, “I didn’t want to make my Bear Bowl out of a firefighter’s glove. Other materials were too thick or didn’t bend. I needed something that was foldable and lightweight.”

Initial prototypes didn’t hold up well after five or six sessions of cooking, but then Santiago found a solution. He built a new model using a thin piece of aluminum for a base, while making the remainder of the pot in the flame-resistant material.

Santiago, majority owner, spent about a year testing that model further, including use of one Bear Bowl more than 70 times for cooking, cleaning, folding, unfolding and starting again. By spring 2017, he and two minor investors turned to crowdfunding online, selling Bear Bowls and raising business capital.

The company’s products now are found mainly through an ongoing crowdsourced campaign at www.indiegogo.com, which promotes innovative products. The Bear Minimum website directs buyers to its Indiegogo link for purchases, with differing pricing options.

Some pots are available as sets under a combined price, or individually. Bear Bowls are manufactured by Santiago in three sizes, ranging in price from $19 for a basic model up to $40 for the 128-ounce Papa Bear bowl. He makes them working in a basement area of his home.

“With crowd-funding prices, you contribute and you get it at discount,” he says. “The greatest part of starting with crowdfunding is you can’t start in the hole. You kick-start with investor money.”

Santiago adds, “I had one person see it who said he needed to invest; that’s my second partner. We’ve made a profit, technically yes, because we’re not even a year into it and we’re not in debt and profitable.”

So far, Bear Minimum in seeking investments has raised nearly $80,000 through combined crowdfunding efforts on both Indiegogo and initially on Kickstarter.  “Since (beginning sales) last spring, we’ve sold almost $80,000, so over 2,500 bowls sold.”

Each Bear Bowl is designed with a handle that’s used while cooking. That handle becomes a retaining strap for a folded-flat pot when it isn’t in use. The company’s literature claims a 32-ounce Bear Bowl can boil water in five to eight minutes.

Many models also come with nearly 12 feet of paracord material, wrapped on the handle. Having backup paracord, originally used in parachutes and available on a Bear Bowl, could be handy if needed as a back-up tool while in the wild, Santiago says.

Bear Minimum pots are designed to be used for cooking on a propane stove, alcohol stove, or any controlled-flame cooking stove. They aren’t intended to cook with over an open fire.

Campers who stock trailers or RVs also could use Bear Bowls if the vehicle has a propane or electric stove, added Tim Krauss, a Bear Minimum business adviser and minor investor.

“The pots are easy to clean and pack up quickly,” Krauss adds. “You don’t want a lot of pans clanging around in the back of the RV.”

Krauss has helped support research and development along with the company’s website.

During the prototype development, Santiago took almost a year off to travel with his wife, Heidi, and two of their five children. Heidi, 16-year-old Jordan and 13-year-old Leilani were all three cast in “Ragtime,” a Broadway musical production touring 109 cities in nine months.

“So my focus was pulled from the business because I travelled with them, so I took time off during 2015-16,” Santiago says. “In 2016, that summer we started forming the preparations for Bear Minimum. We started as an LLC, then bumped it into the partnership it is now, and started the patent process.”

The company is working on that patent process with the Spokane law firm Lee & Hayes PLLC.

As a teen, Santiago moved here with family from Portland in 1987, and he graduated from Mead High School. His work background is mostly in business purchasing and some in sales.

Currently, Santiago is working full time on the Bear Minimum venture, but he also is a part-time driver through the Lyft service.

While his family doesn’t do a lot of camping, they have travelled, and Santiago pays attention to gear. He says part of his “why” behind Bear Bowls is to contribute to building the smallest survival kit possible, as preparation for any adventure.

“One of the things missing from survival kits was a way to cook,” he adds. “Usually in survival, a tool is one you always have with you because it’s convenient, like a Leatherman tool, just in case. I wanted something like that that you could cook with, because that would be the ultimate of cool.”

So far, one Missouri retail outlet stocks Bear Bowls. It’s an independent survival-gear store called Riverside Survival. However, Santiago says the company expects to have retail packaging developed for the cook pots in about a month, so that more stores have a way to display them.

“Right now for most people, they get the Bear Bowls online,” he says.

“We built all these crowdfunded Bear Bowls in our living room basement,” Santiago adds. “We’re getting ready to move into mass production, targeted to start as soon as our retail packaging is ready. When we want to go to the next level, we have three factories we’re looking at in China.”

From Kickstarter and Indiegogo exposure, Bear Minimum’s partners were approached by small online distributors that purchased the products for online stores in Asia and  the U.S.

This spring might be the earliest time for a larger production rate, Santiago says. Another step will be to negotiate a deal with a large distributor as a single point of contact for 2,000 retail outlets, he says.

“The hope is for Bear Bowl to be at any kind of camping gear store, or outdoor supply stores like Cabela’s and REI.”