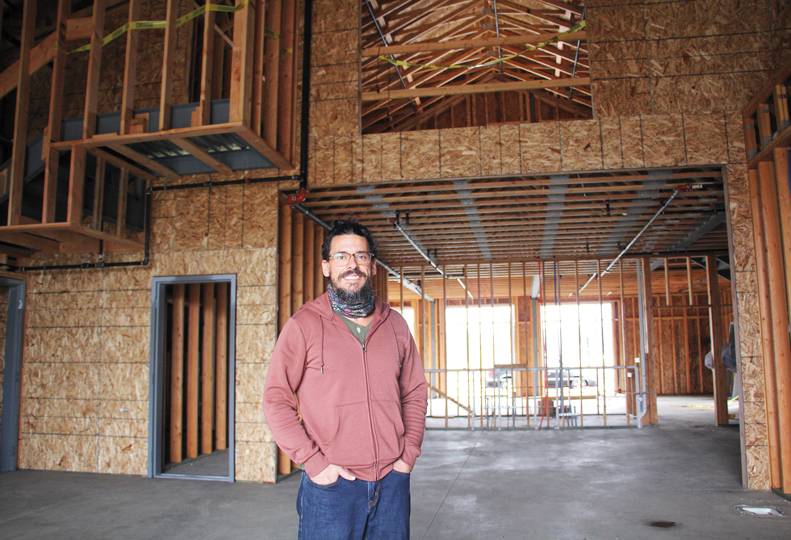 Honey, grains, and old-fashioned recipes will be featured prominently at Emrys Fermentations’ new meadery, brewery, and restaurant when it opens in spring 2022.

Owner Thomas Croskrey says Emrys Fermentations could open its permanent home in the River District development of Liberty Lake as early as March.

The tentative address for Emrys Fermentations is 21850 E. Wellington, but Croskrey says Liberty Lake city planners have warned him not to apply for beer licenses until the address is finalized. The 4,600-square-foot building is currently under construction in the Greenstone Corp.-Centennial Properties Inc. River District development, just across Wellington Avenue from the Harvard Road trailhead for the Centennial Trail, on the south bank of the Spokane River.

“We're focusing on European peasant fare,” Croskrey says. “A lot of what we consider peasant food has really risen to elegance."

Chef Jordan Obermeyer, who has previously worked at Durkins Liquor Bar and Cochinito Taqueria, both in downtown Spokane, will oversee the kitchen.

Croskrey says former Spokane Shock football coach Adam Shackleford has joined him in the venture as an investment partner.

Emrys Fermentations’ beverage menu will be mead-heavy, Croskrey says, with both carbonated and still meads available. Mead is an alcoholic beverage made by fermenting honey and water with yeast. It can include herbs, fruit, and spices as ingredients.

“I'm excited about one of our mead styles called bochet–an old French style of mead-making, where the honey is actually cooked first, before dilution, before fermentation, and you get a nice, rich, pseudo-malty presence in the mead,” he says.

Beers will feature gruit ales, which are made with botanicals such as rosehips and thyme rather than hops, as well as traditional pilsners, ales, and IPAs.

All of the grains Emrys Fermentation uses are “landrace” grains–ancient varieties of grains cultivated with traditional agricultural methods.

“One hundred percent of our base malt is coming out of Palouse Heritage, about 60 miles away,” Croskrey says. “They're the ones doing landrace grains. We'll be using Scots bere barley, purple Egyptian barley, and English squarehead wheat. We’ll be using that in the food side, as well, for our baking and crusts of hand pies.”

Croskrey is familiar with Palouse Heritage. He used grains from the farm in his brews at Bellwether Brewing, which he co-founded in 2015.

“My original concept there was doing beer and mead under the same roof,” he says.

However, because mead and beer required different licenses at the time, Bellwether ended up sticking with beer.

State regulations changed to make it easier to serve both mead and beer, and Croskrey began making plans for his envisioned meadery, brewery, and restaurant. He sold his portion of Bellwether Brewing to his business partner in 2019 and worked a few years as tasting room manager and head of production at Hierophant Meadery, located in Green Bluff, as well as helping Athol, Idaho-based Lone Mountain Farms launch its own brewing operations.

The interior of the space will feature wood and concrete materials. The tabletops and bar will be made of slabs of a red fir tree that grew in front of the historic J.C. White house in Coeur d’Alene. The tree was removed in order to relocate the house in 2019.

Outdoor spaces will include a small patio at the entrance, as well as an enclosed space Croskrey plans to fill with artificial turf, lawn games, and beer garden tables.

The second level of the building will be restricted to adults over age 21 and likely will have the only television in the establishment–something Croskrey said he’d ban from the restaurant until his sports enthusiast investment partner came along. The upper level also will have roof access, where Croskrey plans to install beehives from which to harvest honey for mead.

Croskrey says he plans to hire between 12 and 20 employees.