Benson takes the helm of GSI 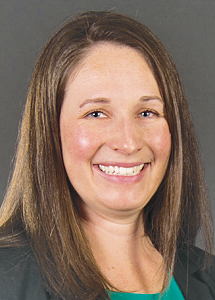 She recently was recognized as one of the Association of Chamber Executives’ ‘Forty under Forty’ leaders in the industry. In 2017, the Journal named Benson as one of the Spokane business community’s Rising Stars.

“I’m excited to assume the CEO role and work with GSI’s talented team to further these goals in collaboration with partners and our members,” Benson says in a press release.

Mielke, CEO for the past three years, says in the same release that it’s personally time “for a new chapter” and he looks forward to continuing to champion the greater Spokane region, but he doesn’t provide specifics about his future plans.

Tom Johnson, GSI Board of Trustees chairman, says, “Alisha has been a key leader at GSI for many years. Her knowledge and relationships across the region, combined with her expertise as a convener, are a perfect match for GSI as we forward important initiatives to support the greater Spokane region’s position as a great place to grow a business.”

Johnson adds, “Todd made important contributions to GSI during his tenure, and we are grateful for his leadership.”

GSI is funded by public and private investment and now has close to 900 private-sector members.