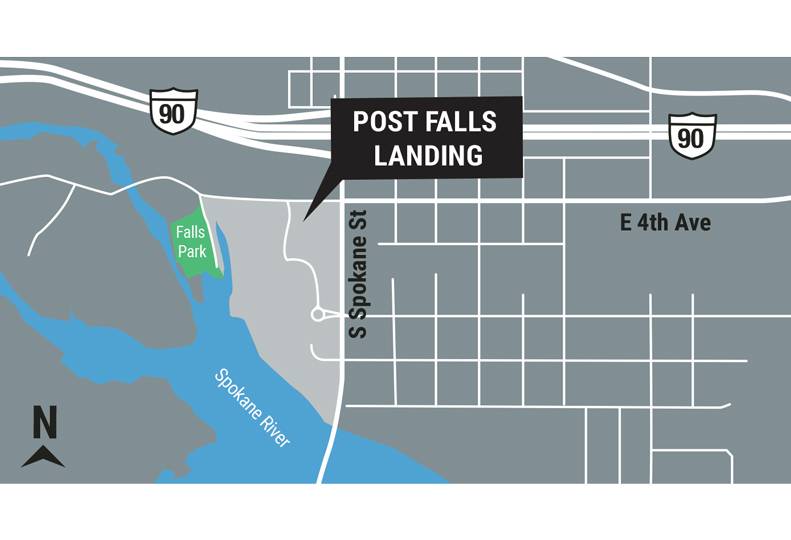 At least 548 additional residential units and 46,000 square feet of office and commercial space are planned at the 33-acre Landing at Post Falls site, on the north bank of the Spokane River.

Water Tower Lofts LLC has purchased at least 2 acres of land at the site and plans to develop the property into a mixed-use development with retail and office space and residential condominiums, according to a transaction release from Spokane-based commercial real estate brokerage Kiemle Hagood.

The company has ties to longtime Spokane developer Rob Brewster, who was the governing agent until late July, when management of the company was transferred to Spokane-based Lone Pine Asset Management, according to Secretary of State records. Lone Pine shares the same address as development company InterUrban Development LLC, which moved into the Patsy Clark Mansion in 2020. Steve DeWalt, Brewster’s development partner, is listed as the sole governing agent of InterUrban.

As of the Journal’s press time, a permit application hadn’t been submitted to the city of Post Falls.

According to Post Falls Urban Renewal Agency meeting minutes, at least three separate developers are planning to build at The Landing. A four-story, 15,000-square-foot commercial building is planned fronting Spokane Street with a three-story, 110-unit apartment building behind it. The project is located near the southwest corner of Third Avenue and Spokane Street. A developer is not named in the documents.

Falls City Development Co., which is led by Alvin J. “Fritz” Wolf Jr., who has Spokane ties, is planning a seven-building development with mixed uses and a total of 168 units. Preliminary site plans show the project will be north of Third Street and will straddle McReynolds Drive. Site plans filed with the city of Post Falls show a 28-stall parking garage will be constructed, along with 269 surface parking stalls. No square footage for the commercial space is listed in the plans.

That project is in the preliminary stages of development, but construction is expected to begin this year. Seattle-based Hoist is the architect on the project.

Just west of the Red Lion Hotel Templin’s on the River, Post Falls Hotel LLC plans to develop 10 acres of land in a mixed-use site that will include a total of 270 living units. Along First Street, 49 townhouses are planned, site plans show. At First and Henry streets, a four-story office building consisting of 7,000 square feet of commercial space is planned with two levels of underground parking. South of that building, a four-story mixed-use apartment building with 165 residential units are planned with two stories of underground parking. On the north end of the lot, a four-story mixed-use building with 12,000 square feet of commercial space is planned with 56 residential units above.

That development is also in its preliminary stages, with an application submitted to the city for a predevelopment meeting.

A separate two-story, 12,000-square-foot urology building is planned on the northwest corner of Third and Spokane streets.

Liberty Bankers Life Insurance Co. purchased the Landing site several years ago after developer Harry Green went bankrupt. The Landing, formerly the Louisiana-Pacific mill site located on roughly 33-acres of land to the east of the Spokane River, had been in development for nearly 20 years as an anchor for the city center. The development has been hampered by legal battles.

The city recently approved Liberty’s request for a six-lot commercial subdivision in the center of the project, with lots ranging from 0.5 acres to 1 acre in size.

Additionally, Avista Corp. and the city of Post Falls have partnered to build a new park along the Spokane River in the Landing area.

The park plans include a plaza with a synthetic-turf amphitheater with seating for up to 165 people and a small stage, according to a press release from Avista.

A portion of the park also will include space for a crane and materials storage for maintenance work at the Post Fall’s Dam.

The new park will be located adjacent to Falls Park and Fourth Avenue on property owned by the city.

Permits have been issued for that project.