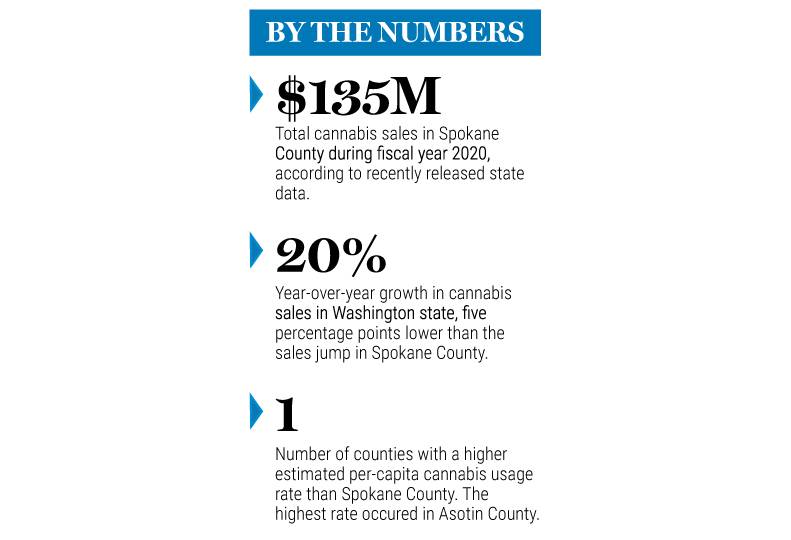 Fiscal 2020 was a banner year for cannabis sales in Spokane County, and retailers here say behavior changes due to the COVID-19 pandemic was the main driver of the increase.

From July 1, 2019 to June 30, 2020, Spokane County cannabis sales increased by about 25%, to $135 million, according to data recently released by the Washington state Liquor and Cannabis Board. That’s higher than with the statewide sales increase, which jumped by about 20% in that timeframe, to $1.26 billion.

That’s a much steeper increase in sales than the previous fiscal year, during which Spokane County experienced a 7% sales hike.

Quinn Sharpe, co-owner of Spokane-based Piece of Mind Cannabis, which was called Satori before the company rebranded on Oct. 30, says sales at the retail chain’s two Spokane cannabis stores rose by about 27% from February to March and have consistently been higher by 30% to 40% year-over-year since January.

“There was a consumer response of stocking up with cannabis products,” Sharpe says. “It’s the same reason why people were stocking up on toilet paper; people didn’t want to run out when the pandemic happened.”

“I figure this is people dealing with a rough time,” MacRae says. “It would appear that people are availing themselves of intoxicants a great deal more than they used to be.”

MacRae speculates that the increase in usage is most likely due to existing users consuming larger quantities. He says it’s likely that some people who were using cannabis after the end of the workday prior to the pandemic are now working remotely and are using more frequently throughout the day.

“If somebody wants to get up in the morning and wake and bake, and then go to work for the day from their home office, they can now do that,” he says.

“They’re generally older people who are getting near retirement or who have never tried it before, and now have the ability to. Maybe they’ve always been curious, but they worked at a job where they couldn’t try it,” Skaar says.

Demand for cannabis-infused edibles and drinks has increased, Skaar says. He believes the increase is likely due to some users, such as parents with children at home, trying to be less conspicuous in their cannabis use.

“We’ve been flying through edibles,” Skaar says. “It’s a very subtle and easy way to consume. I’m assuming that’s a large part of it. They’re trying to do it discreetly.”

“There might have been an uptick in people who were just stressed out, and they hadn’t tried cannabis products before, and maybe these people don’t like smoking cannabis,” Sharpe says.

Skaar says he’s seen a significant rise in online ordering, which has increased by 85% to about $2,000 per day, since March.

Sharpe reports a similar increase. At Piece of Mind Cannabis, online orders now compose about 30% of the stores’ total sales in Spokane County.

Online orders must still be picked up and paid for in person. However, Sharpe says it’s a more efficient way for consumers to shop because they don’t typically have to wait in line.

On March 17, the Washington state Liquor and Cannabis Board announced changes to regulations that included curbside pickup for medical cannabis card holders.

“We’ve seen a huge jump in business due to the ability for people to place an order online, drive up, we can just run out and give them their product, they pay, and then they can be on their way,” Skaar says.

MacRae says that while Spokane County makes up less than 7% of the state’s total population, the county makes up more than 10% of state cannabis retail sales.

In fiscal 2020, sales in the county represented 10.7% of statewide cannabis sales.

“By my calculation, Spokane was 69% higher in cannabis utilization than the rest of the state in the most recent fiscal year on a per-capita basis,” MacRae says.

That’s the second highest per-capita rate in the state. Asotin County — which has a population of about 22,500, versus Spokane County’s 522,700 — has the highest rate of per-capita sales in Washington.

“If you took Idaho buyers out of the (Spokane County) count, my best guess is that it would be at, if not slightly below, what it is in the rest of the state,” MacRae asserts. “I don’t think it’s overly speculative to say that Washington state has become a fairly significant supplier of cannabis to the rest of the nation.”