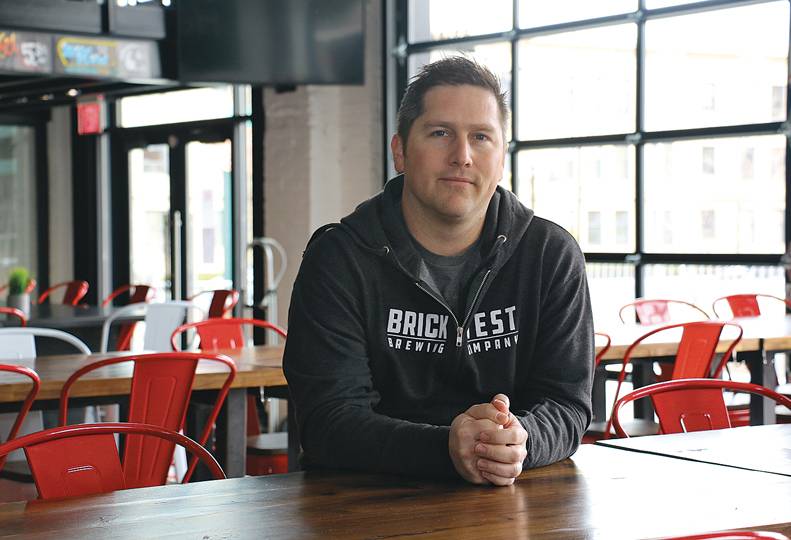 The wooden tables are polished and gleaming, lined with red metal chairs waiting for customers that aren’t allowed to stay. The lights are dimmed, but the doors are open for take-out business at Brick West Brewery, in downtown Spokane.

“We should be good for a little stretch,” says Jordan Tampien, co-owner of Brick West. “But I don’t know many businesses that will be able to hold on too much longer if you’re supporting a whole payroll.”

Around Spokane, restaurants, breweries, bars, and retailers are adjusting operations and cutting expenses to maintain positive cash flow following the statewide mandate ordering the closure to dine-in services for all bars and restaurants, as well as the shuttering of recreation and entertainment facilities, in an effort to slow the spread of COVID-19.

Jack Heath, president of Washington Trust Bank, says the biggest question on banks customers’ minds seems to be how long the shutdown can be expected to continue. Any companies facing financial hardship should be proactive and communicate with their banks early, he says, and look into several programs in place to help out struggling businesses.

He adds, “As we work through this virus, what’s really going to turn this economy around and add to the fast recovery is going to be all these small businesses and their resiliency in coming back … this is a blip that we believe is not a systemic issue that we faced in 2008, 2009, where there were true fundamental issues with the economy … this is really driven by a virus.”

Heath likens the current economic situation to the 9/11 attack.

“There was a real impact to the economy for a time but then a quick recovery,” he says. “We believe that will be the case for this downturn as well.”

John Bryant, owner of No-Li Brewhouse, says the company was well prepared for the fallout from the COVID-19 outbreak, after the company took financial bracing measures following the wind and snowstorm in November 2015 that nearly forced it to shutter.

“I think what we learned from that and prior years in business is to be very humble, be very respectful of money, and the customer,” he says. “If you’re now watching out for cash flow, that’s a hard place to be.”

During the current crisis, No-Li has shifted its menu to accommodate to take out and delivery only and is maintaining sales on its distribution side, Bryant says. It’s unable to sell draft beer, but its investments in its canning lines and distribution network are paying off, he says.

Bryant adds that the company recently relaunched its Spokane Has Heart fundraiser to gather donations to support local businesses.

To cut down on expenses, local restauranteur Adam Hegsted, owner of Liberty Lake-based Eat Good Group, which encompasses 11 Inland Northwest eateries, says he’s had to lay off 140 employees and is cutting expenses by lowering the heat in the restaurants in an effort to reduce utility bills since sit-down service has been banned. He also is canceling cable bills and external cleaning services, such as window power washing.

“It’s just not enough to be sustainable,” Hegsted says. “I think all our management team is working more than 40 hours to keep things running so that when we come out of this, we’ll have a more sustainable business model than we had before. Especially, we’re all looking really tightly at where things can be saved, where the pennies can be pinched.”

On average, the restaurants bring in between $500 and $1,000 in take-out and delivery sales per day right now, Hegsted says.

“I don’t think all of the restaurants are going to be able to make it back out of this. I mean, if you’re a new place or someone who’s already barely making payroll or barely making any money, there’s no way you can survive a closure like this,” Hegsted says.

The company has received assistance from GVD Hospitality Management Services Inc. and Greenstone Corp. with rent and has applied for a loan through the Small Business Administration Disaster Relief Fund, Hegsted says.

“We’re looking for and hoping for a little bit of government support,” he says, adding that if the government were to take action and defer payroll taxes or set up assistance to help fund payroll, that would be ideal and help the restaurants get their staff back.

The SBA began offering relief through low-interest loans to any small business suffering economic fallout from the COVID-19 outbreak earlier this month, according to a release from the administration. Companies can qualify for loans of up to $2 million to help meet financial obligations and operating expenses, including fixed debts, payroll, and accounts payable.

Eligibility is based on the financial impact of COVID-19. Interest rates for small businesses is 3.75%; the rate for private nonprofits is 2.75%.

Thomas Hammer, founder of Thomas Hammer Coffee Roasters, says his company temporarily shuttered all but three of the company’s 19 shops on March 20.

He adds, “We have three that service the Providence medical facilities. Our strategic team made a decision to support those front-line workers,” and stay open.

The company had to lay off about 150 workers on the foodservice side of its operations, Hammer says.

The company’s current revenue stream is coming from its roasting and wholesale operations, which services grocery stores and wholesalers, he says.

He’s uncertain how this will impact the company in the long run, but says, “I think there’s a possibility of it affecting long-term capital projects. I think the long-term piece of it for us currently is simply trying to ensure that every employee working last week has a job to come back to.”

Chip Overstreet, CEO of Spokane-based spices and rub company Spiceology Inc., says the company has taken a hit on the food-service side as restaurants and companies close or reduce their operations. The company, however, remains strong on the consumer side, with a 60% increase in consumer purchases over the past two weeks.

While the company does sell to restaurants, it also sells to universities, meal-prep companies, hospitals, and corporate kitchens.

“We’re blessed to have a business model that has a couple of different facets, and when one is struggling, the other is able to help alleviate the pain,” Overstreet says.

He estimates the company will see about a 40% drop in projected revenue on the food-service side.

Overstreet says his company is spearheading efforts to assist local businesses and launched a website early this week where participating vendors will offer specials to customers and present resources to aid small businesses. All proceeds from the site will go to a restaurant worker relief fund, he says.

The fund is managed by New York-based nonprofit Coco Fund, run by the March On organization.

Brick West’s Tampien says the slowdown in business is manageable at this point.

Sales have declined over 60% across the restaurants, he says. Each location is still open for take-out and delivery, he adds, but sales are nowhere near what they were before.

“For some reason, we had thought a recession was coming this year, so we started firming up each of the companies before then, so we had some reserves set aside,” he says. “The bigger one was employees; we didn’t want to have let a lot of employees go, but we used the standby unemployment and a few different techniques there to make sure people are still getting some money.”

An employer or worker can request to be placed on standby, which waives the job search requirements while workers are collecting unemployment benefits during the approved standby period. To qualify, the worker must have been a full-time employee, be returning to full-time work, and have a probable return-to-work date.

There is about a month’s worth of funds in the reserve, Tampien says.

“A couple of our (restaurants) are newer,” he says, adding that at Brick West, the business would have turned to distribution of its beers, but the company isn’t set up for canning. Instead, it’s set up to distribute kegs that would go to restaurants.

On the development and real estate side of his business, Tampien says that while single-family residential has seen a slowdown, the multifamily and commercial development projects are still going strong, with plans in the works to start an 83-unit apartment project on south Wall Street this year.

The governor’s stay-at-home order issued on March 23 appears to show some construction workers, particularly in the housing sector, are considered essential workers and are exempt from the order.