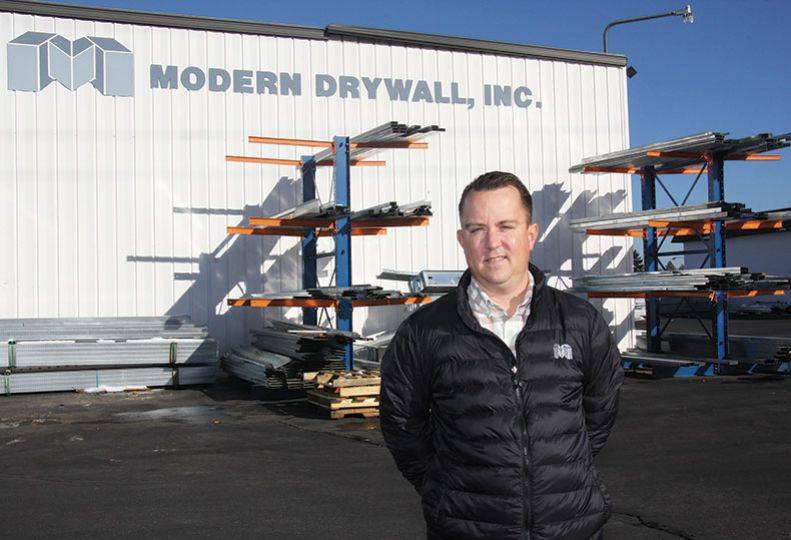 -—Erica Bullock
Brad Mickelson, president of Modern Dry Wall Inc., says a recent wage hike will make it difficult for union shops, such as Modern, to compete in bidding against non-union contractors.

Prevailing wages in some central Washington counties have increased 40% from a year ago for carpenters, and some construction industry professionals here say they’re concerned about the impact of the wage hike on Eastern Washington contracting companies.

However, on Sept. 1, the prevailing wage rate for carpenters in those central Washington counties jumped dramatically to $71.53 per hour, from $51.25, due to change in state law involving collective bargaining agreements and how they are applied in different parts of the state.

DePew says, “My biggest concern is that these five counties, which are probably some of the poorest in the state of Washington, have budgets for schools, hospitals, jails, and community centers, and their budgets for a trade like carpentry that does everything from the framing to the roofing, have gone up $20 an hour (per carpenter). It’s a pretty hefty poke overnight.”

Washington state’s Prevailing Wages on Public Works Act was enacted in 1945, and the law is designed to ensure workers are paid fairly, according to the state’s Department of Labor & Industries. Prevailing wages are the hourly wages, usual benefits, and overtime paid in the largest city in each county, to the majority of laborers, performing the same work, according to the L&I website. A separate rate is calculated for each county.

Mickelson says Western Washington’s prevailing wage rates are higher than in Eastern Washington largely because of the higher cost of living on the West Side.

L&I sets the wage through industrial statisticians, and the agency also enforces the wage requirements.

Cheryl Stewart, executive director of the Associated General Contractors of America Inland Northwest chapter, says the prevailing wage statute was challenged by the association when amendments were introduced in 2018 that changed how the rate is set.

Stewart says, “A couple years ago, the Legislature passed a rule that said, if there was a collective bargaining agreement in a county for a specific trade, that would become the prevailing wage.”

Instead of allowing L&I statisticians surveying contractors to set the rate, as occurred previously, a recent ruling from the Washington state Supreme Court upheld the statute tying the prevailing wage to the highest collective bargaining agreement in each county.

Under the rule, contractors will submit their collective bargaining agreements to the state, L&I will review each agreement, and the agreement that has the highest wage for that county will set the prevailing wage.

“We helped negotiate this law, and we were okay with it,” Stewart says. Although, she adds that one piece of the rule states that if there are two collective bargaining agreements in the county, then the higher of the two would be the prevailing wage, prompting the association to file a legal challenge.

“Because it was a higher wage, it prevailed. Even though it only represented two companies,” Stewart says. “We ended up suing on the premise that the state can’t delegate it’s authority to set the prevailing wage to an outside party, which is what it’s doing.”

She explains that, by having the collective bargaining agreement set the rate, it gives power to the bargaining agent to set the wage.

“We just felt it should be the agreement that represents the most people to set the wage,” she says.

Most companies sign the areawide agreement, although some negotiate on their own, she says. “But our contracts represent the biggest number of people in those groups. Anyone on the East Side falls under our rate.”

Under the rule, however, because the 120th meridian doesn’t follow county boundaries, the bisected counties will have the prevailing wage defaulted to the rate set for Western Washington, because it’s a higher rate.

Because of the new law, a contract negotiated by one company prevailed, she adds.

Contractors are expressing concern regarding the new wage rates, and Mickelson and other industry leaders say that the ramifications will impact both contractors and workers in Eastern Washington.

Stewart says private projects won’t be impacted by prevailing wage rules, so workers likely will gravitate toward those companies who must pay a higher prevailing wage. While the construction industry faces continued labor shortages, the draw toward higher wages could amplify labor gaps for those other construction developments.

From a contractor’s point of view, Mickelson says, “This is going to make it impossible for union contractors, such as myself … to compete against non-union shops. We’re already at a significant disadvantage with the package that we’ve got, but now that you bump an additional ($20) an hour, bidding on projects in central Washington will be a waste of my time.”

DePew says, “One contractor can mess it up for the remainder of the contractors which is why typically the union scale prevails, because it’s a group or collective amount for the majority. That’s the whole idea behind prevailing.”

“It just doesn’t seem right that the same wage would be paid in Yakima or Omak as it would be in downtown Seattle,” he says.

Mickelson adds, “It’s going to invite West Side carpenters to work in central Washington at the expense of local workers.”

He contends that, if work slows in Seattle, workers from there will be close enough to work in central Washington without taking a pay cut and likely will take jobs from local carpenters.

Stewart says the Supreme Court only ruled on the constitutionality of the amendment, and there might be an option to appeal on other grounds,  but she’s unsure what the association’s next step will be.

“We’re not opposed to the whole rule,” she says, “just that one little piece that says the highest collective bargaining agreement prevails.”