Its ranks have ballooned by 600 over last two years 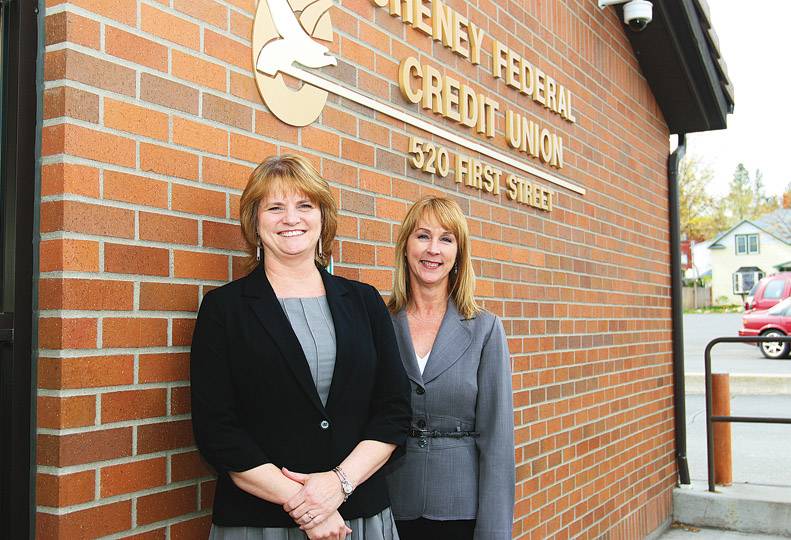 -—Judith Spitzer
JoAn Sanders is CEO of Cheney Federal Credit Union, and Lynn Mount is assistant manager. The credit union’s charter was expanded to include the Cheney and Medical Lake school districts.

Cheney Federal Credit Union has added 600 members to its field of membership since April, 2013 when its charter was expanded to include anyone who lives within the Cheney and Medical Lake school districts, which includes Airway Heights, says JoAn Sanders, its CEO.

“Our total membership is about 4,929,” Sanders says. “We’re healthy and growing and happy to be here.”

The credit union gained 340 of the 600 new members in 2014, she says, adding that in the two years since expansion, it has seen a 22 percent increase from outside the city of Cheney.

Cheney Federal Credit Union originally was chartered in February 1951, Sanders says. Its original charter included those who lived, worked, worshipped, or attended schools in the city of Cheney, as well as federal, state and local government employees headquartered in Cheney.

“Thus far in 2015, 25 percent of new memberships have come from the expanded field of membership,” says Sanders.

The credit union’s total assets as of March 31, were $87 million, up from $84 million one year earlier, says Sanders. It reported total loans of $33 million as of that date, down from $35 million a year earlier. Sanders says the credit union’s loan income over the past year wasn’t what she had hoped, and interest rates have been lowered over the past year to encourage more loan activity.

The addition of a new marketing director this month is expected to help promote the small credit union and “get things turned around,” she says.

Credit unions also measure what is called net-worth ratio, which is determined by dividing the institution’s net worth by total assets. The National Credit Union Administration says a credit union must have a net worth ratio of at least 7 percent to be considered in good financial health.

Located at 520 First in Cheney, the credit union has 12 full-time employees, says Lynn Mount, assistant manager, who has been with the institution for about 22 years. Mount is one of three employees with tenures of more than 20 years.

The credit union loans money mainly for autos, recreational vehicles, and real estate. Sanders says the membership is fairly conservative and members don’t want to incur debt until they feel the economy is in good shape.

“The recession didn’t affect us that much, but our loan growth did slow considerably,” she says. “We are looking at doing more marketing to our expanded field of members.”

Sanders adds that she is seeing signs that people are starting to take out loans for large purchases again. “Auto loans are picking up a bit,” she says.

This month, the credit union began promoting its accounts for children and young adults. “April is Credit Union Youth Month so we are focused on financial literacy for young people,” Sanders adds.

Level two, for youth from 9 to 12 years old, encourages savings with special incentives, she adds, and 13- to 17-year-olds receive an ATM card to encourage responsible use of a debit card. She says the credit union holds contests and drawings during the month to reward young customers with a $50 gift card.

“Members can go into participating credit unions nationwide and deposit money or anything else they do at the Cheney location,” she says.