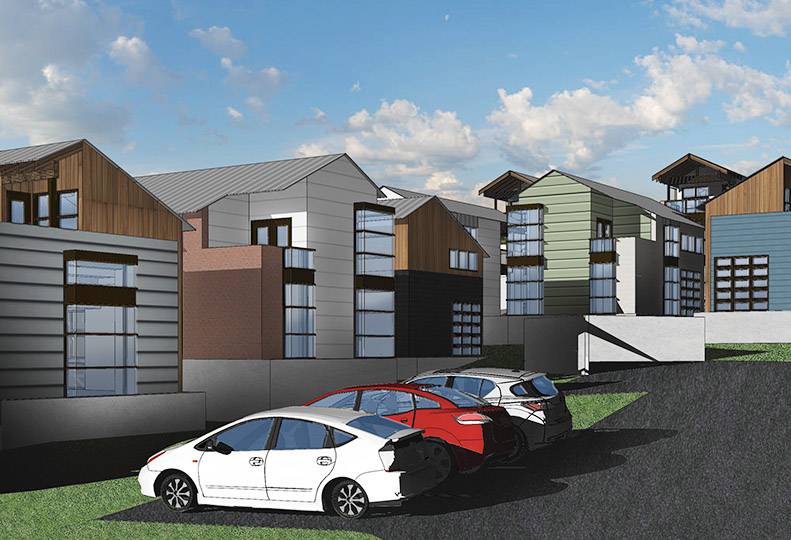 -—Christopher Morlan Architecture PLLC
The upscale 23-unit Ledge at Five Mile development would have rents ranging from about $1,400 per month for a one-bedroom cottage to about $1,800 for a larger unit with two bedrooms.

Chris Morlan, who owns and operates Spokane-based Christopher Morlan Architecture PLLC, says although his business is on the small side, that doesn’t keep his firm from designing large projects, such as a $6 million, 23-unit cottage housing project at Five Mile, Morlan says.

Called The Ledge at Five Mile, the 2.2 acres where the cottages will be built is located at about Stratton and Kingsford avenues just north of North Five Mile Road.

Morlan says the features of the cottages are unique in design and due to Spokane’s municipal code, cottages must have more open space than usual.

The units will share patio space but will have separate rooftop space for individual units, giving renters both public and private areas that, he says, will appeal to millennials.

Morlan contends that millennials, the target market for the units, different in that “they seem to have a more open mindset about sharing space,” he says. The Pew Research Center, an American think tank organization, defines millennials as being born from 1981 to 1997.

Ryan Buth, co-owner of The Ledge, is both developer and general contractor on the project. Buth says his company, Brylson LLC, also will handle rental management when the units are rented next spring.

“The whole idea behind The Ledge cottages is to bring in luxury rentals that have open, modern floor plans with flex space … something completely different for Spokane.”

He says the units aren’t apartments but rather are smaller, single-family homes with no connected walls that will appeal to younger professionals who want an upscale living space close to other renters.

“It’s a different approach to the rental market in Spokane, especially on the North Side,” says Buth.

Buth says cottages will range in rent from about $1,400 per month to rent a one-bedroom unit, up to about $1,800 per month for a two-bedroom cottage with flexible space that can be used for another bedroom. Parking lots will be located at both ends of the complex, and many units will have garages or car ports.

One of the unique features of the cottages will be smart home technology giving tenants the ability to control lighting, security, home heating video, and audio from personal electronic devices. Units will have balconies as well as rooftop space.

Buth estimates building and development costs at about $4 million and says ultimately the value will be in the $6 million range, “depending on what we’re getting in rent,” he says.

“We do have a few unique features. We’ve worked on making sure (the designer) has ample wall space for designing custom entertainment walls, and flexible options on kitchen layouts. We’re working on garage doors on the exterior walls allowing whole rooms to open to patios or gardens,” he says. “We’ve included locations for murphy beds for full flexibility in small spaces as well.”

He says the 1,000-square-foot cottages have lofts that won’t add any area by code but will allow access to roof-top decks.

Morlan says excavation of basalt outcroppings potentially will take another month or two. Meantime, he will be finishing unit designs. “We’re a long ways from building,” he says. “With site excavations issues we tentatively won’t start construction until mid- or late summer.”

Morlan currently employs one assistant at his offices in about 800 square feet on the second floor of the Eldridge Building located at 1325 W. First. Morlan graduated from the University of Idaho in 1990, and after working for several Spokane architectural firms opened Morlan Architecture here.

Morlan has designed and built his share of residences, commercial buildings, and small standalone housing units and currently is finishing up the work on Pride Prep, Spokane’s first charter school located at 811 E. Sprague.

Working on Pride Prep was fun, says Morlan. “The 17,000-square-foot space is one very large room with classroom spaces in clusters throughout the open space,” he says.

Morlan’s previous projects include a 4,200-square-foot building for Planned Parenthood of Spokane at 12104 E. Main in 2013, as well as 4,600-square-foot, two-tenant building at the northeast corner of Perry Street and 11th Avenue, in the heart of the South Perry Business District.

In 2011, the Morlan firm landed a two medical-clinic design job, one in Spokane Valley and another in Pullman.

The firm has also done design work for the Wild Sage American Bistro, and more recently for a retail center near the Spokane Valley Mall.

Morlan says like other businesses, the architectural firm’s revenue fell after 2008, but has come back strong. “We’ve grown slowly and steadily until 2014, when we had an almost unmanageable jump,” Morlan says.

He adds that this year revenue looks to be within the same ball park as 2014.

“The almost unmanageable jump meant we had to change our method of payment for myself to salary, and we had a tax hit that we saw coming but still had to plan for. I’m thankful for an excellent accountant,” he says.