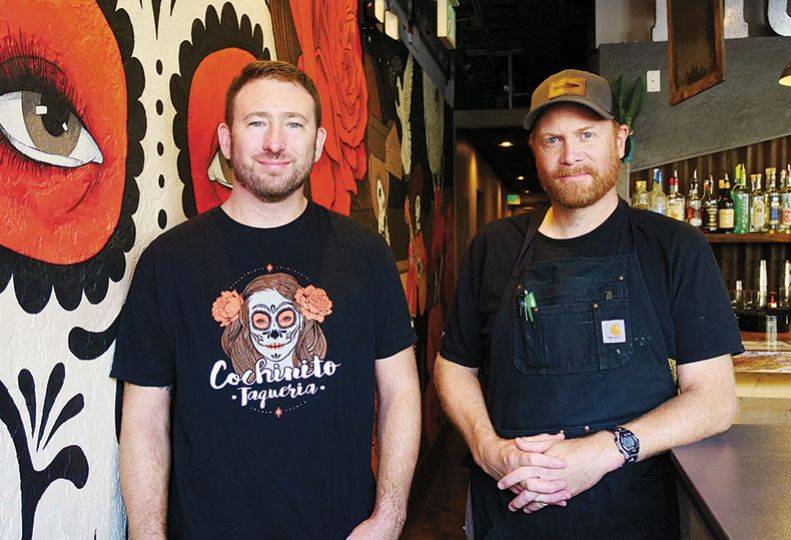 The Hayden location will open at 9426 N. Government Way after renovations are completed, equipment is installed, and staff is hired. Dickinson says he’s hoping to open in early November.

“We’ve always wanted to do multiple locations,” Dickinson says. “The plan from the beginning was to do something that was unique and exciting, but also something we could duplicate and do a few of.”

The menu and ordering system will be nearly identical to Cochinito Taqueria’s flagship location, at 10 N. Post, in downtown Spokane.

“Conceptually, it will be the same,” Dickinson says. “We want to keep it basically a carbon copy of what we’re doing (in Spokane).”

Keeping similarity between locations will help Dickinson and Curtis manage both, he says.

“This will be our first time managing two restaurants in different locations, so I think the smart play is to make something a little cookie-cutter that we can manage from afar as we bounce between the two locations, and still keep quality and consistency up,” Dickinson says.

Veradale-based real estate development company Baker Investment Group, led by Randy Baker, is renovating the strip mall building in which Cochinito will open its Hayden location. Dickinson says that the exterior of the building is receiving a new façade, and the 3,600-square-foot interior of the future Cochinito space is being gutted in preparation for a full remodeling. The parking lot also will be updated and expanded.

“It’s nice to be able to design something from scratch,” Dickinson says. “It’s fun to see what you can do in a space with a blank canvas.”

Dickinson says while the Hayden restaurant will have the same counter ordering model, he’s looking forward to creating a more straightforward layout for the bar and dining room areas than the downtown Spokane location’s design.

“This place (downtown) is designed where you walk in and see a dining room, and people want to instinctively grab a table,” Dickinson explains. “Unless they’ve been here or pay attention to the signage, they don’t always gather that they need to go up and order in line. There, we can make that more cut-and-dried, so right when you walk in, you’ll naturally flow over to that counter.”

Cochinito will hire 15 to 20 people to staff the Hayden restaurant, Dickinson says.

Dickinson and Curtis had eyed a North Idaho location for a couple of years, he says. Both grew up in Post Falls, and Curtis currently lives in Hayden. Dickinson says he also sees promising growth and development in Hayden.

“It’s like when we got into downtown Spokane. It was sort of in flux, just on the cusp of new restaurants coming in, new nightlife, new cool stuff, and we got in at just the right time,” Dickinson says.

There aren’t concrete plans for a third location, Dickinson says, but he and Curtis have an eye out for opportunities in Post Falls and Liberty Lake, as well as parts of Spokane’s South Hill and North Side.

Dickinson and Curtis previously worked for Spokane fine-dining restaurant Clover. Dickinson served as Clover’s executive chef for three years, while Curtis was front-of-house manager from the time Clover opened in 2012 until he and Dickinson established Cochinito in 2018.