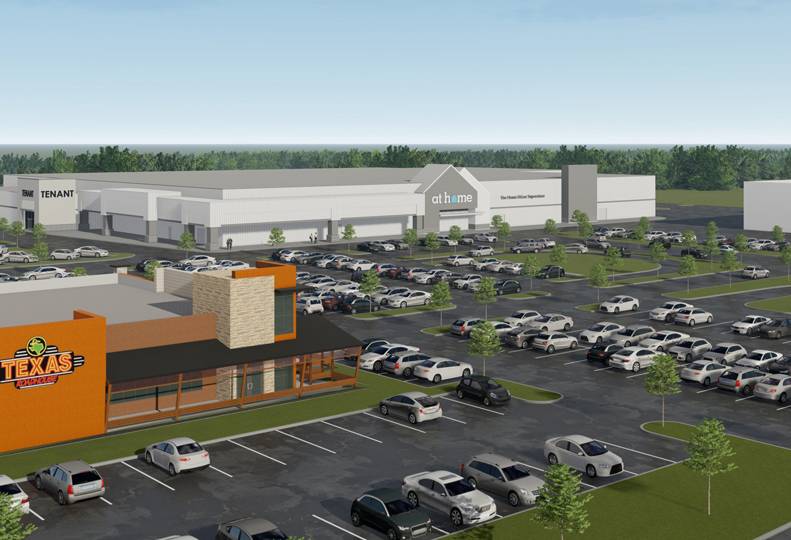 -—Herschman Architects
At Home Stores will take the bulk of the former Costco Wholesale Corp. building, located at 7619 N. Division.

Texas Roadhouse Inc. and At Home Stores LLC are the first confirmed tenants of the roughly $15 million redevelopment project by Rich Development at that site.

Steve Ridenour, a broker with Spokane-based NAI Black who handled the transaction, says Rich Development purchased the building at 7619 N. Division with the intent to redevelop it into a multitenant property. He declined to disclose sale price, but documents filed with the Spokane County Assessors office show the property sold for $6.8 million.

Costco moved its North Side store last year to 12020 N. Newport Highway, north of Spokane, and now occupies a 167,000-square-foot, $15.6 million warehouse there. Ridenour says the organization opted to move because of expansion limitations at the Division Street site.

Plans filed with the city indicate the development will be named the Northside Marketplace, which will be occupied by three tenants, two of which are confirmed. Greg Vena, senior vice president of acquisitions and development for Rich Development, says the plans to build two other multitenant buildings on the property were scrapped, and it currently only has plans to build the restaurant building.

Plano, Texas-based At Home Stores LLC, a big-box retail chain that specializes in home décor products, will be Rich Development’s first tenant at the site, occupying about 86,500 square feet of space in the former Costco building.

Ridenour says Rich Development closed the deal earlier than expected to expedite the opening of At Home, which he estimated will be in early April.

Plans filed with the city show At Home will use roughly 77,000 square feet for retail space, and a combined 900 square feet for offices and a break room. Lewisville, Texas-based Parkway C&A LP is listed as the contractor on the $1.3 million interior and façade remodel, and PKWY Architects LLC, also based in Lewisville, is the architect.

At Home has 181 stores in 37 states, according to its website and offers furniture, bedding, and other home décor products.

Louisville, Ky.-based Texas Roadhouse Inc. is also a confirmed tenant of the 15-acre lot, says Ridenour. A roughly 7,000-square-foot, full-service sit-down restaurant will be built near the southwest corner of the warehouse in the space the Costco gas station formerly occupied.

No building permits have been filed yet, but Vena says Rich Development anticipates breaking ground later this spring, either in late May or early June, and plans to finish construction before the holiday season.

The restaurant is expected to be the first Texas Roadhouse in Spokane. The restaurant chain’s next closest eatery is located at 402 W. Neider, in Coeur d’Alene.

Ridenour says Rich Development is currently in discussion with three prospective tenants for the remaining 47,000 square feet of space, although he declines to disclose names until a deal is completed.

A brochure posted to Rich Developments website says the company will offer outparcels for lease or sale for future development at the site and could house retail, medical, light industrial, warehouse, or storage companies.