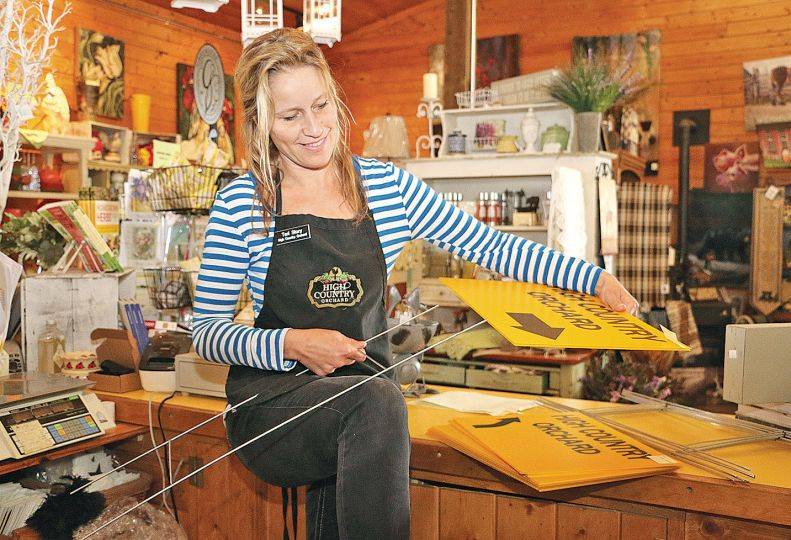 -—Judith Spitzer
Teri Story, owner of High Country Orchard, is putting together signs to help the public locate the business on Green Bluff Road. She says agritourism brings crucial income to the Bluff.

Green Bluff, a heavily visited area 15 minutes north of Spokane in the foothills of Mount Spokane, is home to farms growing a wide array of fruits and vegetables, a winery, antique stores, an alpaca ranch, several garden nurseries and cut-your-own Christmas tree operations, as well as wedding and event venues.

Spokane County Commissioner Todd Mielke says there previously were no county ordinances concerning special events on Green Bluff and other such areas of the county, and individual business owners interpreted what ordinances there were concerning noise and traffic. Mielke says commissioners agreed it was time to put something definitive on the books.

“We decided on the temporary-use permit, which must be purchased every year. It costs less than $500,” he says.

Restrictions under the new ordinance, he says, limit the maximum number of people at events to 200 and limit events to 25 per season. The season is defined as the beginning of May through the end of October. Events are defined as weddings, graduations, corporate gatherings, among others. The new rules also limit special events to Fridays, Saturdays, and Sundays and say the events must be finished by 9 p.m. Additionally, they specify standards for noise, fire safety, and parking, among other issues. Mielke says areas used for special events cannot exceed one acre and must complement agricultural operations and production.

John Pederson, planning director at Spokane County’s building and planning department, says the county hasn’t yet received any applications.  The county is requiring people who want to apply to come in person for a pre-application conference.

Pederson says the application is about two pages long and addresses everything from a site plan to time frames for events, to parking accommodations and an environmental checklist. The pre-application process is necessary to clarify what’s required under the new ordinance.

“Administrators will approach each application on a case-by-case basis in terms of preparation needed to get the temporary permit,” he says. “We will tell them exactly what we need. Some people aren’t inclined to draw up a site plan … it just depends on their expertise.”

He adds, “But until we get an application we’re just (guessing) at how long the process will take.” He anticipates once an application is filed, it might take 14 to 20 days to process. “It’s shouldn’t take more than 30 days,” he adds.

Sunni Cannon, who owns Cannons Edge, a wedding and event venue on 10 acres, located at 7607 E. Green Bluff Road on the west side of the Green Bluff area, is in the process of working with the county and went in for the pre-application conference last week.

“There are so many steps to this,” Cannon says. “The county has worked so hard on this, and we’re meeting with them again today (May 29).” Cannon says the limit of 25 events doesn’t bother her and won’t reduce the number of weddings she has planned.

“I think 25 events is enough for the six-month period,” she says, adding that the new closing hours of 9 p.m. won’t have an effect on her business since Cannons Edge had closed at that time in the past. Cannon says she estimates that making changes to meet the requirements of the new ordinance will cost the company about $1,700 for engineering plans, providing a site plan with scale drawings of where things like septic tanks are located, changes in parking provisions, and an environmental application.

Cannon says she understands that some of her neighbors were opposed to the ordinance.

Opponents have voiced concerns that the numbers of weddings and events will overwhelm the area’s history and agriculture, as well as pose problems for enforcement of the new rules. Some residents have questioned whether the Spokane County Sheriff’s office will be able to enforce how many guests attend events and whether they’ll leave at the required closing time.

Teri Story lived on Green Bluff for 12 years before she and her husband last year bought High Country Orchard, located on 20 acres at 8518 E. Green Bluff Road. She was working as the wedding coordinator at the orchard when they purchased the business.

She says she is grateful for the way the county handled the new requirements, and although the company will see decreased income because of the new guidelines, she says she was happy to see definitive rules in place.

“We thought they were going to shut us down. So we’re grateful. It wasn’t really defined before,” Story says.

She says the new rules will limit the number of events she is able to have this summer.

“We’ll have to stick only with weddings,” she says. “It is frustrating. We won’t be able to do corporate and graduation events,” she says, adding that those would have been held on different days of the week.

Story says events at High Country Orchard are held in a barn with a door that closes to keep the noise levels down. She says other Green Bluff owners went later with events that didn’t end until as late as midnight, “but we moved it back to 9 p.m. even before the ordinance.”

Story says she and her husband want the traffic because it helps High Country sell products such as fruits, vegetables, and the gifts in the store. The property includes an old barn, converted to a gift store, with about 3,500 square feet of space.  “And the weddings in June, July, and August bring people up here when there’s no one else up here. It’s been an issue for 10 or 15 years.”

Story, who reads about similar issues in farm trade magazines, says there are comparable situations happening across the country. “Small-tract farms can’t survive and compete with large-tract agriculture, and many have gone to having parties and other events.”

She adds, “People who want to have their weddings up here can’t believe how beautiful it is, and we’re only 15 minutes out of town.”

Although Story preferred not to disclose High Country Orchard’s revenues, she says having four kids and being at home with them while she tends to the store and does baking and gardening is a luxury for her, but it doesn’t mean her husband can stop working outside the home. “I have gone back and forth between the business world and teaching for the last 25 years.” Her husband is a full-time teacher with the Mead School District.

She says during the season from about April to December, High Country Orchard typically employs about 40 people, many of them part-time workers.

Story contends that some people don’t know that Green Bluff exists, aren’t sure how to find it when they do, and are deterred further during the summer by road repair and construction work.

“We make it on people coming up here to see us. Agritourism brings visitors to the Bluff. And the majority of people who come here have never been here before,” she says.