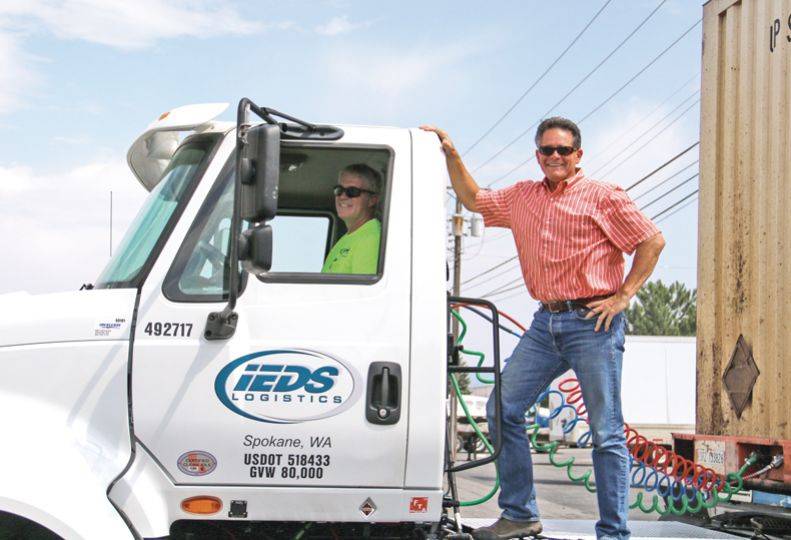 -—Virginia Thomas
Earnest Winn and Matt Ewers, of Spokane Valley-based trucking company IEDS Logistics, say a shortage of truck drivers is due in part to older drivers leaving the profession and a lack of interest by younger people in joining.

Trucking industry experts say a scarcity of commercial truck drivers has begun to create sweeping consequences ranging from higher prices for goods to a slower economy due to widespread inability to deliver goods on time.

“That’s something that’s been a little bit frustrating on my part,” Call says. “We can’t gauge it other than just the word-of-mouth information that we get from our members. I know they’ve all definitely been feeling the shortage of drivers.”

The shortage is due to several factors, trucking company owners say, including a lack of young drivers to take over from an aging workforce, an increase in regulations, and the inability of some potential drivers to pass a drug test.

“There’s more loads available right now than there are trucks available. I don’t think we’ve ever seen it like this,” he says.

Attracting young people to the industry, Bosma says, is one of the biggest obstacles to ending the shortage.

“Truck drivers used to be considered heroes of the road, and it was pretty admirable for a young person to want to grow up and be a driver,” Bosma says.

That sentiment has changes  however, he says, adding “I think as a society we’ve told people, ‘Hey, go to college and get a good education, so you don’t have to work as hard.’”

Bosma says he believes there’s a societal stigma around the truck driving profession, despite the fact that median 2017 pay for drivers was $42,480, and drivers can make up to $100,000 annually.

The average commercial truck driver in the U.S., according to the U.S. Bureau of Labor Statistics, is 55 years old.

Bosma says he believes federal regulations might be a factor in dissuading young people from entering the truck driving industry.

“Part of our problem, I would say, is that you can get a commercial driver’s license at 18 years old, but you can’t haul interstate freight, you can only haul intrastate freight,” he says.

That restriction applies to freight items as well as the truck itself.

“I can send a 19-year-old or 20-year-old, somebody under 21, from Spokane to Moses Lake with a load of freight; however, if one piece of that freight originated in Post Falls, that’s against regulations, because it’s considered interstate freight, even though that driver didn’t go over there to pick it up,” Bosma says. “I think by the time some of these kids get to be 21 years old they’re on to electrical, plumbing, construction, whatever else.”

The process of becoming a fully-licensed, independent driver might also contribute to the lack of young drivers, Ewers says.

“You can’t just jump into this. You have to get specialty training, you have to go to a driver school to get your CDL,” Ewers says. “Traditionally when you hire a driver, you want to hire someone with experience, but that threshold is getting a lot lower to where you almost have to hire someone with a lot less experience to drive your trucks than what you’re comfortable with.”

Other regulations are dissuading older drivers from staying in the industry, Bosma says, including guidelines regarding driver health.

“There were a number of drivers that were disqualified for blood sugar levels,” Bosma says. “Sleep apnea is a big deal now.”

“There are a lot of drivers who were close to the age of retirement or maybe were working past retirement age, at that point they just decided ‘I’ve had enough, I don’t want to deal with that,’” he says.

Bosma claims that legalization of recreational marijuana use within Washington has also caused some drivers or potential drivers to pursue other careers.

“There’s a number of people out there who do not want to give up marijuana,” he says. “That’s a requirement to have a CDL, you have to be in a random drug-testing pool.”

A dearth of commercial drivers has led to an increase in costs, Ewers says, as many trucking companies now offer higher pay in the hope of attracting more drivers.

“We’re trying to hold the costs down because the customers don’t want to pay more, but yet if we want to keep our drivers we have to pay them more,” Ewers says. “In some cases, some companies are paying bonuses to drivers just to get the product moved from point A to point B. Right now it’s effecting businesses, it’s reducing their profit margins because they’re basically blowing their budgets out trying to make sure their product gets delivered. The transportation costs are creating havoc on the profit-and-loss statements.”

Call says some Washington Trucking Associations members have told her that they worry about having to refuse business due to lack of capacity.

Ewers says area manufacturers also are suffering from the shortage of drivers.

“They’re stuck holding their product, trying to make a delivery, so they end up paying bonuses,” he says, adding that transportation costs are rising above budget for many manufacturing companies in the area.

Bosma says the driver shortage has also changed the way shipping companies and trucking companies do business with one another.

“It used to be that trucking companies would make sales calls and try to win the business from the big shippers. Now the shippers are going to the trucking companies and they’re doing the sales effort, trying to get the trucks for their product,” he says.

Several potential solutions to ending the shortage of commercial drivers have been proposed.

Call says a bill called the Developing Responsible Individuals for a Vibrant Economy Act, known as the DRIVE-Safe Act, could change some of the age and interstate regulations. The bill was introduced in the House of Representatives in March; its proponents say they hope to see it revived in the next legislative session.

Ewers says one solution could lie in a technological solution called “platooning,” in which one truck with at least one driver leads a train of several semi-autonomous trucks through a wireless communications system.

“It would not be a service used within the cities,” Ewers says. “Eventually that would lead to autonomous trucks, but that’s further out in the future.”

Bosma says another regulatory change that could alleviate the shortage would involve the state of Washington allowing trucking companies to transport “triples,” or three trailers connected to one truck.

“We’ve tried for a lot of years even to just get triples allowed between Spokane, maybe Ellensburg, and the Tri-Cities,” Bosma says. “Just that in itself … would save a substantial amount of fuel and would lessen the amount of trucks on the road.”

“I think there’s a misperception from a number of grassroots organizations that deem that as being extremely unsafe,” Bosma says. “However, statistics from those other states show that triples operations are actually safer, they actually have fewer accidents per thousand. Most companies that allow triples, they run the triples at a slower speed.

“The railroad is against any more efficiency on over-the-highway freight. Anything that allows more capacity to move freight on the highway is more competitive to freight moving over the rail,” Bosma claims. “Yet, a lot of that freight that’s moving over the rail still moves by truck at the point of origin and point of destination.”

Like other industries struggling to find young, qualified employees, Call says the Washington Trucking Associations has been reaching out to high school students in the hope of interesting them in a career as a commercial truck driver.

Training programs may be another way to entice young people into the industry, Bosma says.

“We’ve got a training program with our own company here that will take young folks, we’ll start working them on our freight dock and teach them how to drive a forklift, how to load and unload freight,” Bosma says. “After they’ve been in that position for a year or two, we will help them get their CDL in the hopes that they’ll stay and become a driver for our company.”

Attracting women to the industry potentially is another way to ease the shortage, Call says, adding that just 6 to 7 percent of commercial truck drivers are women.

“A lot of the perception is that it’s kind of a man’s industry, and you have to have a certain amount of strength to do it,” Call says. “A lot of the way it’s done these days is really being able to back the truck up to the dock and freight being offloaded by forklifts. So, it’s really not a whole lot of heavy lifting; it’s really driving skills that are necessary.”

“We were reached out to by the women’s prison here in Western Washington and we plan to do a presentation on truck driving as a career,” Call says. “We’re hoping to expand that throughout the state and figure out ways that we might be able to create some kind of training program for people while they’re serving their sentence to be able to come out of prison with a CDL, or at least the ability to further their CDL and their education.”

Ewers says that as society changes—with more people using e-commerce to have goods delivered to their door—the commercial trucking industry will have to change too.

“We know we can’t keep increasing the number of roads and the amount of capacity in our infrastructure,” Ewers says. “But we still are going to be requiring people to transport goods, and all that is going to require the same infrastructure, that’s not really going to expand. So we’ve got to be able to use existing infrastructure and increase the amount of goods and people transported.”

Drivers have had to adapt to making more deliveries in residential areas, Bosma says.

Ewers says a continued shortage could have an impact on the economy at local and national levels.

“Hypothetically, if we were not able to get more drivers in our network then the economy could be slowed down a little bit,” Ewers says. “It could affect the growth of the economy because goods can’t get delivered on time.”

“And of course that is going to be made up at the consumer level,” he says.