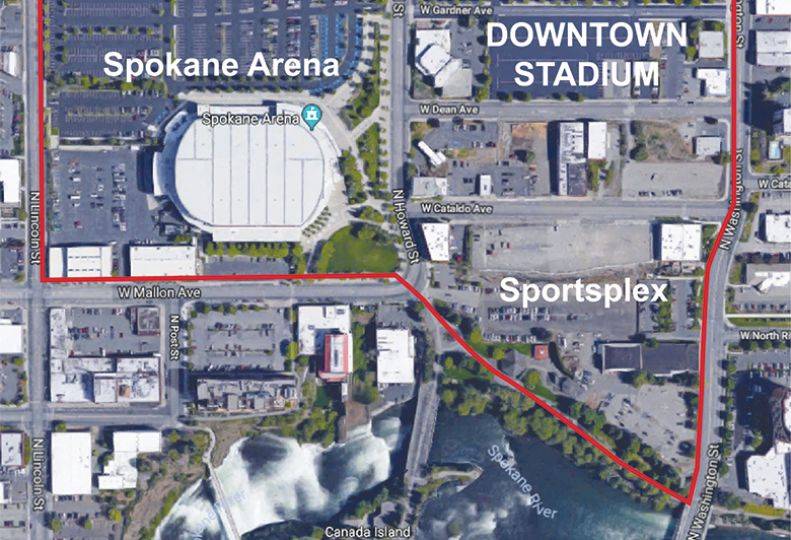 Spokane Public Schools and city of Spokane officials have proposed a possible site for a new high school sports stadium to be located east of the Spokane Veteran’s Memorial Arena.

The Journal reported last month that the school district is looking for an alternative to Joe Albi Stadium. At the time, the district said it was looking at a location north of downtown.

Now, however, the school district and city of Spokane have identified a potential stadium site next to the Spokane Civic Theater, with west Boone Avenue, north Washington Street and north Howard Street serving as three of its borders. The civic theater would remain at its current location, at 1020 N. Howard.

Mark Anderson, the associate superintendent of support services for the Spokane school district, and Rick Romero, who heads the city of Spokane’s economic development initiative, have been making presentations in recent weeks to various boards who could be potential partners in the building of a new stadium that would eventually replace dilapidated Joe Albi Stadium on Spokane’s North Side.

The proposal calls for a 6,000- to 7,000-seat facility, however, the amount of acreage it would take for the stadium has yet to be determined, Romero says.

That particular lot, says Romero, is owned by both the city and Spokane Public Facilities District. Any determination about its future would have to be a joint decision, he says.

“To be honest with you, we’re really excited about this one,” Romero says. “The opportunity to possibly partner with a variety of agencies has a lot of appeal.”

A new stadium is being considered within the context of the school district’s need for three new middle schools—one of which may be located near Albi Stadium.

In an effort to meet the Legislature’s mandate to reduce classroom sizes for students grades K-3, the school district previously determined it will move sixth graders out of elementary schools and into middle school, which ultimately will spur the need to develop three new middle schools.

“Right now, it’s an examination of cost, and the pros and cons for all of the options that have been developed,” Anderson says.

The city and school district have been looking at what to do with Albi for years.

In a study conducted more than four years ago, the city of Spokane said it no longer wants to maintain the stadium, and that it been operating with an average annual budget deficit of $390,000 for several years.

A study conducted by ALSC Architects PS, of Spokane, in 2013 showed a new stadium would cost an estimated $20 million to $25 million.

The proposed stadium site near the arena is located immediately north of the site for the envisioned North Bank sportsplex. The sportsplex would be a 93,000-square foot athletic complex that would include a 200-meter, six-lane indoor track, room for up to 10 basketball or 17 volleyball courts, locker rooms, and flexible multisport space, as well as a championship court that could be converted to ice.

The land for the proposed sportsplex is city owned and under the jurisdiction of the Parks Board. The city acquired the land in 1999, Romero says.

The effort to build that facility is being overseen by the Spokane Sports Commission and Spokane Public Facilities District.

Anderson says the district has had several discussions with city officials about what to do with Albi in the event the district decides to build a new middle school on 20 acres of land south of the current stadium.

In that proposal, Albi, located at 4918 W. Wellesley, would be reduced from a 30,000-seat facility to a 7,000-seat facility. The ALSC study estimated that reducing Albi would cost between $15 million and $20 million, Anderson says.

Anderson and Romero so far have presented proposals to the Spokane School Board, Spokane City Council and Parks Boards, the Public Facilities District and Spokane Sports Commission, he says.

Opportunities for the public to review and offer comment on the proposals will begin in the spring, he says.