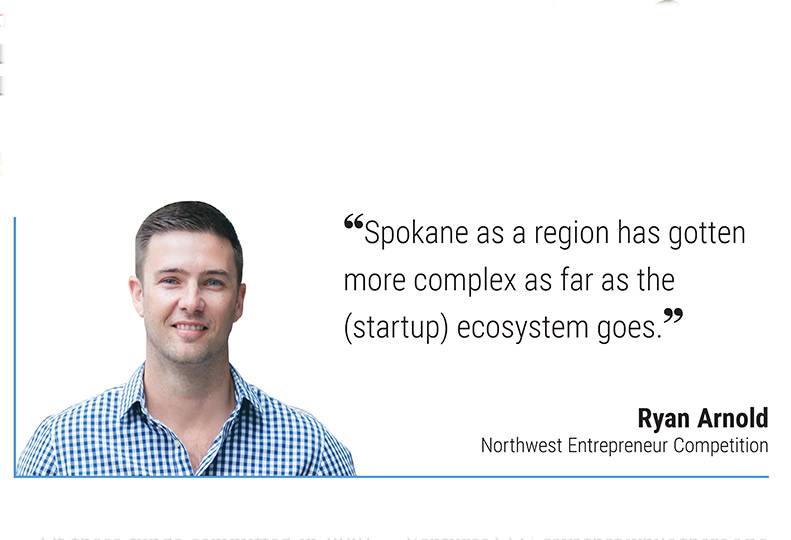 While funding opportunities have slowed in the wake of the COVID-19 pandemic, Spokane’s startup community remains active, bolstered by employees located throughout the U.S. and events that bring attention to new companies, some market observers here say.

According to information from proprietary market data software subscription platform PitchBook, more than $51.6 million went to startups in the Spokane area in 2021. That’s less than half the $107.6 million in funding startups here received in 2020.

Of those funds committed in 2021, nearly half—$25.3 million—was venture funding.

Steve Rector, chief investment officer at Spokane-based Cowles Ventures LLC, says that while there’s no shortage of startups to fund, cash flow to investments has slowed as investors have been more hesitant to part with their money while the pandemic persisted through a second year.

“People are preserving cash in some of the uncertainty,” Rector says. “I was a little more protective during the last 18 to 24 months, just until we got a better handle on where things were going.”

Cowles Ventures is the venture-capital arm of Cowles Co., which owns the Journal of Business through its subsidiary, Northwest Business Press Inc.

Tom Simpson, managing member of angel fund Kick-Start, president of the Spokane Angel Alliance, and president and CEO of Ignite Northwest, says that data from Pitchbook should be taken with a grain of salt.

“PitchBook data is not complete because you don’t have everything disclosed,” Simpson says. “I would be careful about drawing a meaningful conclusion and saying the Spokane region suddenly is less interesting because of a decline.”

According to PitchBook data, startups that received the greatest amount of funds in 2021 include:

So far in 2022, investors have infused more than $7.7 million into local startups, according to PitchBook. Most of that came from a $7 million venture funding round to Spokane-based spice maker Spiceology Inc. from San Francisco-based venture capital firm Jackson Square Ventures and other undisclosed investors.

Rector says investments in Spokane-area startups are likely to recover somewhat in 2022.

“Overall, in the markets and the venture space, we’ll probably see some upticks in ’22, just because we are getting out of some of the uncertainties that were clouding us in 2020 and 2021,” Rector says.

Simpson says future successful companies could be born from local startup events, which also maintain the momentum of the community.

Sparks Weekend, to be hosted this year by Ignite and LimeLyte Technology Group Inc. from April 29 to May 1 at the Catalyst Building, at 601 E. Riverside, provides new startups with resources to launch, Simpson says.

“It’s a three-day event where people with ideas for brand-new businesses present their ideas on Friday evening,” Simpson says.

About 40 presenters will be winnowed down to 10 finalists, who will be paired with mentors to work on creating a minimum viable product, conducting market research, and refining their busines model. On Sunday, competitors will present their final plans to a panel of judges. One winner will receive $50,000 in investment capital.

“That’s something that’s been very fruitful in the ecosystem here in Spokane,” Simpson says. “For example, Spiceology was the winner of a predecessor to Sparks Weekend, which was called Startup Spokane. Kaspien, several years ago, was the product of the same business plan competition.”

Spokane Valley-based e-commerce company Kaspien Holdings Inc. is an example of a company that has benefitted from some effects of the COVID-19 pandemic, Simpson says. It has increased employee numbers by hiring people to work remotely. Other startups in the Spokane area also are likely to grow this way, Simpson says.

“The broader acceptance of remote work has really helped Spokane,” Simpson says. “In the past, sometimes Spokane was at a disadvantage for recruiting. Now, we can recruit people to work for emerging Spokane companies, though the workers may live elsewhere. It’s benefitting the entrepreneurial ecosystem in Spokane in two ways—more talent coming in, and the ability to attract a broader base of talent, though the workers might not live in Spokane.”

Ryan Arnold, director of regional entrepreneurial strategy at North Idaho College and co-manager of the Northwest Entrepreneur Competition, says entrepreneurial events are a good way for startups to find funding and other resources.

At the Northwest Entrepreneur Competition, hosted virtually on April 13 by North Idaho College and Spokane’s University District, more than 50 student teams competed for a total of about $44,000 in awards.

In addition to funding and feedback from judges, such events provide networking opportunities. Arnold says many entrepreneurs have a small network or none at all.

“Events like these oftentimes are a sort of clearinghouse for that, where they’re not only competing, but they’re meeting new people, they’re meeting their own peers that are going through the same issues, and they’re building their own entrepreneurial network,” Arnold says.

The Northwest Entrepreneur Competition has been hosted by North Idaho College annually for about 15 years, Arnold says. In that time, the entrepreneurial ecosystem here has flourished, he says.

“What we’ve found over time is that Spokane as a region has gotten more complex as far as the ecosystem goes,” he says. “We’re doing a good job of cooperating across state lines. The ecosystem is starting to work together a lot better, more cooperatively.”

Even before the Northwest Entrepreneur Competition came along, the startup community here was connecting higher education institutions with startup investment opportunities.

“You see this in the building growth of Spokane’s University District, for instance—the physical form of these spaces and places next to the downtown core,” Arnold says. “We were trying to attract talent and resources. But now, that talent and resource is here. Those buildings and spaces are here. With that comes the opportunity to just keep building and growing.”

Rector says Spokane startups have been receiving more attention from investors based outside of the Inland Northwest.

“We’re attracting some good, strong attention nationally with some of the companies that were started here,” Rector says. “I’ve got a couple of different venture groups in the Bay Area and a couple in the Seattle area that are much more inquisitive as to what we’re doing over here.”