Examining a surge in death investigations

Medical examiner’s caseload increases, likely to grow more due to variety of factors 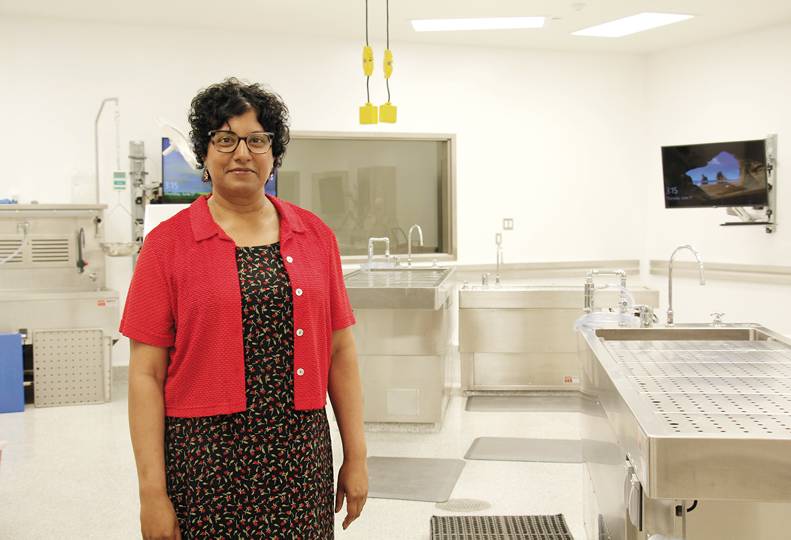 The number of cases the Spokane County Medical Examiner’s Office oversees has surged in recent years, and further increases are projected in the second half of this years, says chief medical examiner Dr. Veena Singh.

A mix of factors have contributed to the increase, Singh says. County data show recent increases in accidents, drug overdoses, and natural deaths—including from COVID-19. Cases referred to the office from other counties are also on the rise.

Year to date, the number of natural deaths and the number of vehicle-related deaths the office handles have each increased by just over 30%, data show.

Fatal drug overdoses in the county have continued to rise throughout the pandemic, Singh says.

“There are some studies that show that drug use has spiked during this time, so of course, overdoses would also spike,” Singh says.

The Spokane County Medical Examiner’s Office also handles referral cases for 13 other counties in Washington and North Idaho. Singh says deaths that require an autopsy examination have increased in those counties as well as in Spokane County.

“Those are counties where there’s a coroner who’s in charge of the death investigation system, but in some cases, they will determine an exam is needed, and those they send to us. They contract with us to do their autopsy examinations,” Singh says. “That number is also up, so we’re doing more exams overall, for Spokane County and for these other counties.”

Much of the overall increase can be attributed to an increase in local population, Singh says.

“A lot of that is population-based—the more people who live in an area, the more people are going to die in that area,” says Singh, who took on the role of chief medical examiner at the Spokane County Medical Examiner office in April.

According to the Washington state Office of Financial Management, Spokane County’s total population increased by about 2.9%, or 14,650 people, from 2018 to 2020.

Singh spends much of her days reviewing case files put together by medical investigators, conducting autopsies, completing paperwork such as death certificates, communicating with law enforcement and families, and testing samples.

Cases for which a medical examiner would sign the death certificate include injuries, overdoses, and sudden unobserved deaths, such as when a person dies alone at home of causes that aren’t immediately apparent.

“The trend is less steep (than total deaths reported), but it’s definitely an upward trend, year over year,” Singh says.

The number of natural deaths the office investigated also increased, which Singh says is somewhat related to the pandemic.

“Natural deaths are also tangentially COVID related, in the sense that a lot of people didn’t seek medical care during the pandemic because they were afraid of going to the hospital and getting COVID,” Singh says. “Whether they were exhibiting COVID symptoms or they were having heart symptoms or something else, a lot of them stayed home and waited it out, and some of those didn’t survive that experience.”

Based on year-over-year increases in the past six months, Singh says the total number of cases the office handles is projected to be higher than each of the previous two years.

So far in 2021, the leading cause of death for cases referred to the Spokane County Medical Examiner’s Office has been accidents, closely followed by natural causes.

“We are coming out of the pandemic, but we’re still seeing deaths related to COVID. It’s not totally over,” Sing says. “We still need to remain vigilant in terms of what’s going to happen as time goes by. We’re seeing fewer deaths, and I think that is related to the vaccination.”

“When people are out and about more, there are more traffic issues, more car crashes,” she says. “There’s also potentially more friction as people get out and interact more.”

Singh says the county’s budget for the medical examiner’s office has been trending upward steadily in recent years, to a 2021 total budget of $2.38 million, from a $1.7-million budget in 2018.

She notes that the office returns a portion of that to the county general fund each year — $525,131 in 2020 — from fees for county-referred autopsies, with a smaller amount recouped through a state program for reimbursing infant and child autopsy costs.

Part of the recent increase in deaths is attributable to the COVID-19 pandemic, Singh says.

“We don’t necessarily have to do an autopsy on those cases,” Singh says. “Many of them have been in the hospital already, so the effects of the disease have been documented, but they are reported to us.”

The office conducts an initial investigation into COVID-19 cases before releasing the jurisdiction, or legal power of decision-making, to the hospital, which allows a hospital clinician to sign the death certificate.

“We review what they tell us, and sometimes we review the medical records just to make sure,” she says. “Even if you have COVID, you can die of something else like an overdose or an injury. We just want to make sure that isn’t the case.”

Singh comes to Spokane by way of the Minneapolis area, where she served for three years as a forensic pathologist in the Midwest Medical Examiner’s Office.

She says the newly renovated facility here was a significant factor in her decision to take the job of chief medical examiner.

“This is a cutting-edge building,” Singh says. “All kudos to the county for supporting the pathologists in making this building financially and allowing them to do this. It shows a lot of foresight on the county’s side, to recognize the importance of having good death investigation in your community and to support that is pretty amazing.”

She adds, “It’s not the case everywhere.”

The autopsy suites are spacious and ergonomically designed, with adjoining windowed observation rooms for law enforcement and other observers. A separate autopsy room and cold storage room for bodies in more advanced stages of decomposition keeps odors to a minimum. Small rooms adjoining the autopsy suites provide a convenient place to dictate notes and review medical records.

The office currently has 14 employees, including three forensic pathologists and four certified medicolegal death investigators. Since 2019, the office has added three staff members, two investigators and a pathologist. An office space for a fourth pathologist is currently used for storage, but Singh says it’s proof of the county’s cognizance of future needs.

Singh adds that the state-of-the-art facility will help with recruiting pathologists, investigators, and technicians.

“The more we can show the professional aspect of it, the better able we’ll be to show people what a great job it is,” she says. “Otherwise, people get distracted by the kind of horror movie aspect of it, and they don’t see how amazing this is, how much knowledge we gain not just for the families but for public health and public safety and for other structures that rely on the data that we gather through death investigation.”

Singh says the Spokane County Medical Examiner’s Office is working to get more involved with local universities and thereby introduce more people to the field of forensic pathology.

“We’re in the process of setting up affiliation agreements with the medical schools and are working on getting clinical appointments for the pathologists so that our office can be a clinical rotation site for medical students,” Singh says.

Singh also hopes to develop undergraduate opportunities such as internships.

Singh’s move to Spokane is a return to her Pacific Northwest roots. She’s from Portland, where she went to medical school to study and train for general surgery. But partway into a residency at Seattle-based Swedish Medical Center, she realized she was more interested in autopsy pathology, she says.

Singh has served as a medical examiner, medical investigator, and forensic pathologist in three different states in her career.

“There’s a shortage of forensic pathologists, so there are a lot of jobs open all the time, everywhere,” Singh says. “You can move around a lot as you become interested in new opportunities.”

When COVID struck, Singh decided she wanted to be closer to home, she says.

“Sometimes there’s a crime involved, but that’s not really our issue to decide,” she says. “We’re just trying to figure out what happened to the person.” she says.