Fairchild Air Force Base prepares for its large expansion 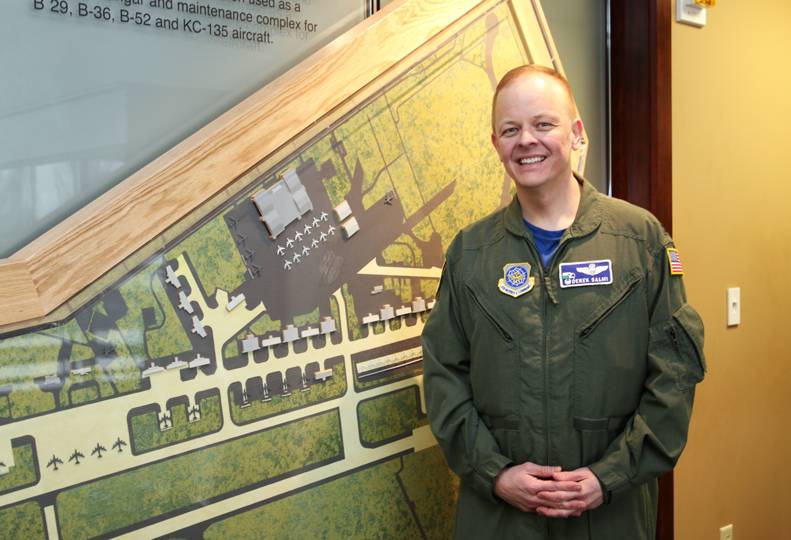 Fairchild Air Force Base is gearing up for a busy 2019 with the anticipated influx of new employees and the launch of new programs, says base commander Col. Derek Salmi.

Salmi assumed command of the base in June 2018 from Col. Ryan Samuelson.

Currently, the base has 44 KC-135 Stratotankers. It expects to receive 15 more over the next 18 months. Salmi says about 1,000 people will come with the aircraft, an estimated 400 of which will be active-duty Air Force personnel and the rest will be their family members.

Salmi expects the influx of aircraft will arrive from McConnell Air Force Base between fall of 2019 and spring of 2020.

Fairchild’s last sizable expansion came in 2017, when the 384th Air Refueling Squadron relocated to the base and brought 50 new airmen.

Salmi claims no other individual base or country hosts as many refueling tankers as Fairchild.

“If Fairchild were its own nation … we would have the second largest refueling fleet in the world,” says Salmi.

Only the combined U.S. Air Force, which has 400 tankers, houses a larger refueling fleet, he says.

Fairchild was a natural fit, Salmi claims, because of its strategic location enabling the ability to dispatch fueling tankers anywhere in the world. He estimates about 10 percent of the wing is currently deployed.

Currently, Fairchild is Spokane County’s largest employer, with just under 6,000 employees, including both active-duty and civilian personnel.

The new airmen will work primarily in maintenance and operations functions, says Salmi.

Salmi says he isn’t concerned about the KC-135’s becoming obsolete in favor of the KC-46, the Air Force’s newest refueling aircraft, which aircraft manufacturer Boeing Co. recently began delivering to the Air Force this year. He expects the KC-135 will fly for at least 20 more years because of regular maintenance and continuing updates in technology to the aircraft.

With such a large anticipated influx of personnel, Salmi says housing is a concern, and he is working closely with nearby city governments and developers to increase housing.

Salmi says the base hosted 15 contractors and housing developers, as well as Spokane Mayor David Condon, last fall to discuss housing needs and provide information on housing allowances Air Force personnel receive and the criteria used to make those decisions. The Air Force has limited on-base housing and is designed to have a majority of its personnel live off base.

He says, “Many of them highlighted the fact that there’s a willingness to build, but there’s that shortage of craftsman … the folks that physically build the houses.”

According to the Spokane Association of Realtors Multiple Listing Service, Spokane currently has 841 single-family homes listed for sale.

Another concern, Salmi says, is the comparatively high minimum wage in Washington.

“We find at times we’re recruiting for the same talent, primarily in child-care services,” he says. “As the minimum wage is raised across Washington state, that’s something we need to pay a lot of attention to so we can attract those childcare professionals.”

Along those lines, Salmi also expressed concern with talent management for the Air Force, stating growing markets in China and the larger global logistic system are drawing experienced pilots and fleet maintainers away from the military and into the private sector. Currently, the Air Force is looking at quality-of-life initiatives to retain talent.

“We spend a lot of time thinking through that and trying to address some of these quality-of-life initiatives, so airmen come … there’s a demand for experienced pilots, and you’re going to find the most experienced pilots here,” he says.

With the expansion, Salmi says the base is planning updates to several buildings, including the construction of a consolidated base operations building to create a focal point for 17 distinct organizations on base.

“There are synergies we can pull together from the team, and this new base operations facility will allow us to locate together our different organizations,” Salmi says.

The base operations building currently is in the design phase, Salmi says, and he expects it will be completed by 2021.

Salmi says all new facilities will be designed with the base’s new Green in ‘19 initiative in mind.

“Our vision is to be the Air Force and Department of Defense leaders in environmentally friendly and energy friendly initiatives.”

Long term, he says the base is looking at making infrastructure changes to the base, including energy efficient heating and cooling systems and lighting.

Specifically, the base is looking at updating its World War II-era hangars.

Regarding the water contamination discovered in spring 2017 on the West Plains attributed to fire retardant foam used on the base, Salmi says, “Right now, there are just over 80 houses that have some form of (contaminants). Every single one of those houses has been addressed or has a plan to address what their contamination issue is.”

Salmi says the base is on track to resolve the issue by spring and says quarterly tests are being performed to ensure there’s no contamination.

The base is preparing to host the Exercise Mobility Guardian exercise in September, during which roughly 2,000 to 3,000 U.S. military personnel, along with personnel representing 25 to 35 allies and partner nations, will converge on Spokane for joint training on mobility aircraft.

The exercise, hosted every two years, will simulate a warzone in the Pacific Northwest and allow participants to perform practice missions between coalition forces to prepare for potential future conflicts.

“It will be a great opportunity to showcase what Fairchild can do and support an important training objective,” says Salmi. “We’re going to build partnerships and hone our skills as heavy mobility aircraft.”

The base will also host SkyFest 2019 this summer, which will feature demonstrations by the F-22 Demonstration Flight Team, the U.S. Army Golden Knights, and the KC-135 Stratotanker.

Salmi commanded the 100th Operations Group and 401st Air Expeditionary Group at the Royal air force Mildenhall in the United Kingdom from 2016 to 2018, before assuming command of Fairchild in 2018.