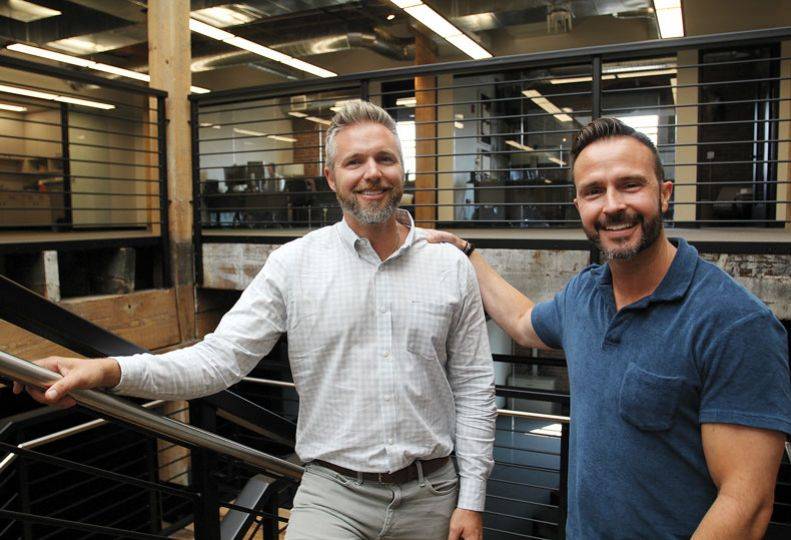 -—Karina Elias
Mark Niemann, left, and Patrick Walsh are two of the cofounders of Fig. 1 Patents PLLC, a firm that now has a total staff of 24 people.

Fig. 1 Patents PLLC, a patent preparation law firm established in 2020, is growing quickly, with a projected annual revenue growth of 20% this year, says Patrick Walsh, co-founder of the firm.

Located in the historic Cold Storage Warehouse building at 116 W. Pacific, in downtown Spokane, Fig. 1 Patents has taken residence in the top two floors, encompassing just under 19,000 square feet of space. Designed by Spokane-based Uptic Studios, the Fig. 1 headquarters has roughly 50 offices set within the restored warehouse space that is marked by exposed wood columns, beams, and brick walls.

“By next year, we should be in a hiring spree,” he adds.

Mark Niemann, co-founder of Fig. 1 Patents, estimates the firm will need to hire roughly 10 additional attorneys, agents, and administrative employees in the coming year to keep up with the firm’s growth.

“We’ve added three clients in the past year that are pretty big, so we are expecting our revenue to double in the next couple of years,” he says, although he declines to disclose specific revenue numbers.

Most clients Fig. 1 works with are in big companies on the forefront of technology, he adds. A few of Fig. 1’s clients include eBay Inc., Adobe Inc., and Motorola Mobility LLC, which is a subsidiary of Lenovo Group Ltd.

Other clients he declines to identify by name include a large semiconductor maker, a payments and financial technology service provider, and a medical device maker.

While there are other patent law firms in town that are larger, such as Lee & Hayes PC, Walsh says there is room in the industry here for Fig. 1 to grow. He explains that often within patent law, when a firm acquires a client, it’s precluded from working with the client’s competitors.

“There is conflict. For example, Lee & Hayes represents Amazon, and we represent eBay,” explains Walsh. “You can’t legitimately represent two marketplaces because you can use knowledge from one company to work on another.”

Niemann, Walsh, and the firm’s other two founders, Jamie Breen and Dave Morasch, worked together at Spokane law firm Sadler, Breen, Morasch & Colby PS, which did business as SBMC Intellectual Property Law, but dissolved in 2020 after one partner left to start his own practice and another died suddenly.

Walsh says the four Fig. 1 partners formed the firm with their vision of what a patent law practice should be. They moved away from the traditional use of last names and selected a more descriptive name, Fig. 1 Patents, he says.

“All patents are required to have at least one drawing, one figure. That’s how we came up with Fig. 1,” explains Walsh.

Fig. 1 doesn’t use the conventional billable-hour system, but works on a fixed-fee basis, says Walsh. Attorneys are paid on commission, based on the number of projects they complete.

Niemann says that this allows attorneys to work as much as they desire without having to fulfill a yearly hour requirement. It also allows for employees to have flexible work schedules. Two fully remote workers live in Seattle, and one is in Portland, Oregon.

“We don’t care what hours you are in the office or how many hours you put in,” says Niemann. “It’s more about if you can do good work and get projects done.”

Walsh adds that after the firm’s first year, it was ranked among the top 25 law firms globally for patent quality by Patent Bots, a Somerville, Massachusetts, company that provides tools for patent prosecution.

Patents are protected by the U.S. laws and international conventions.

“People want, when they innovate, to have their ideas protected and assurance that if they invent something … nobody else can steal it,” Walsh says.

Patent law is a niche field within the legal industry that requires attorneys to have a science or engineering degree, says Walsh. In addition to passing a bar exam, prospective attorneys seeking to practice before the U.S. Patent and Trademark Office are required to pass a patent bar exam.

Walsh and Neimann both studied computer engineering at Gonzaga University and say they didn’t learn about patent law for science, technology, engineering, and math students until their senior year. They saw it as a creative alternative to applying their science knowledge without necessarily doing engineering work, Walsh says.

“It’s a 50,000-foot view from the top where you are connecting things and translating ‘inventor speak’ into sort of more (coherent) English,” he explains.

Because patent law has a smaller pool of applicants to choose from and requires both a STEM and law degree, Fig. 1 partnered with GU School of Law and eBay to form a scholarship and internship program aimed at prepping and recruiting diverse students into the field of intellectual property law. Titled Diversity in Technology and IP Law Scholarship and Internship, the program was launched in 2019 while the founders were working at SBMC.

Every spring, one student is awarded summer internship placements at eBay and Fig. 1 and a $10,000 one-time stipend. In addition, the student receives a recurring scholarship to be applied toward tuition.

“We present to high schools even to say, this is an option if you do STEM,” says Walsh.

During the pandemic, the firm made investments in software that streamlines work and makes it easier for attorneys to focus on the creative side of the business rather than the administrative side, says Walsh.

Walsh and Niemann say that, while the firm is growing quickly, they aim to keep a relaxed work ambience that they claim sets Fig. 1 apart from traditional firms that are more focused on luxury brands and having their names on doors.

“We want to build the Nike of patent law,” says Walsh, “I want our clients to be proud to be associated with us because we are high-performing.”