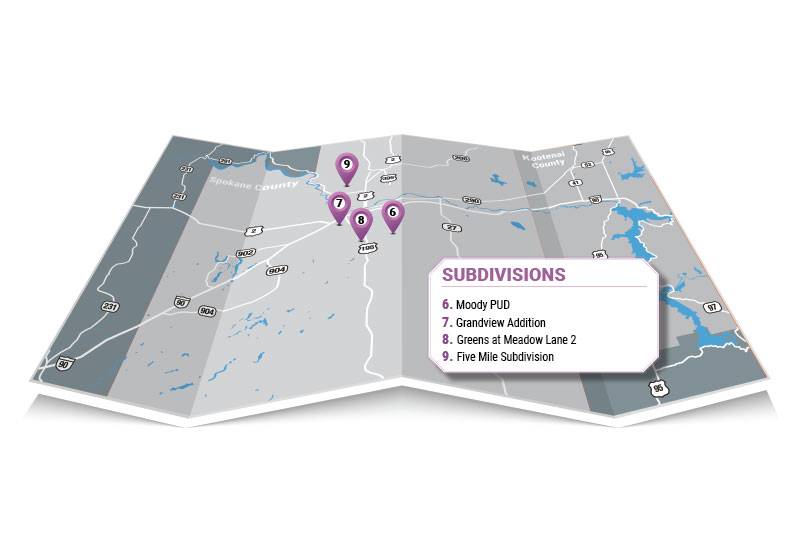 Nearly 300 residential units are planned in four subdivisions throughout Spokane, according to separate pre-development applications filed with the city.

Whipple Consulting Engineers Inc., headquartered in Spokane Valley, is the engineer and surveyor for three of the subdivisions, including the Moody planned unit development, Grandview Addition, and Greens at Meadow Lane Two subdivisions, according to the application documents.

Representatives of Whipple Consulting Engineers and SynTier decline to comment beyond information available in public documents on the developments.

Preliminary plans for the proposed Moody PUD include 101 duplex and townhome-style units at the southeast corner of 55th Avenue and Freya Street, in the Moran Prairie neighborhood. Moody PUD subdivision also will have 274 total parking spaces including 202 attached garage spaces with driveways, and 72 additional surface parking stalls, plans show.

The name of the PUD is derived from the former owner of the land, Chicago-based Moody Bible Institute, which operates the Moody Aviation pilot training program at Spokane International Airport’s Felts Field.

In west Spokane, site plans filed with the city for the Grandview Addition show the development planned by Liberty Lake-based Greenstone Corp. will have 91 single-family units. The subdivision is located between West 17th Avenue and West 21st Avenue, on nearly 18 acres of vacant land. Grandview Park is located to the east of the development site.

Greenstone Corp. purchased the Grandview Addition site for $1.05 million in 2005, according to the Department of Revenue. The pre-development document shows the estimated cost to prepare the lots for construction is $3.9 million.

Officials at Greenstone Corp. decline to comment on the development.

In southwest Spokane, preliminary site plans for a subdivision to be called Greens at Meadow Lane 2 show 28 single-family residential units proposed on 6.8 acres of land. The subdivision is located at 5808 S. Meadow Lane Road, in the Latah Valley area of southwest Spokane. The development site is two blocks west of U.S. 195 and immediately west of Eagle Ridge Short Course golf course and east of the massive Eagle Ridge neighborhood.

Paras says the site will be “a Paras Homes project,” and the homebuilder will work as the contractor for the subdivision. An architect has yet to be selected, he says.

No zoning changes were needed, he says, as the site was already zoned for single-family residences.

Paras declines to disclose the construction value of the development, and no value is listed in public records.

Paras says construction is estimated to begin between eight months and one year from the time it’s approved.

Pre-development conference notes filed with the city of Spokane show a development in northwest Spokane, Five Mile Subdivision, will have 79 single-family residential lots situated on nearly 18 acres of land. The development site is located north of West Strong Road, between Nettleton Lane and Elm Street.

A total of nearly 53 acres of land is within the four proposed subdivisions.