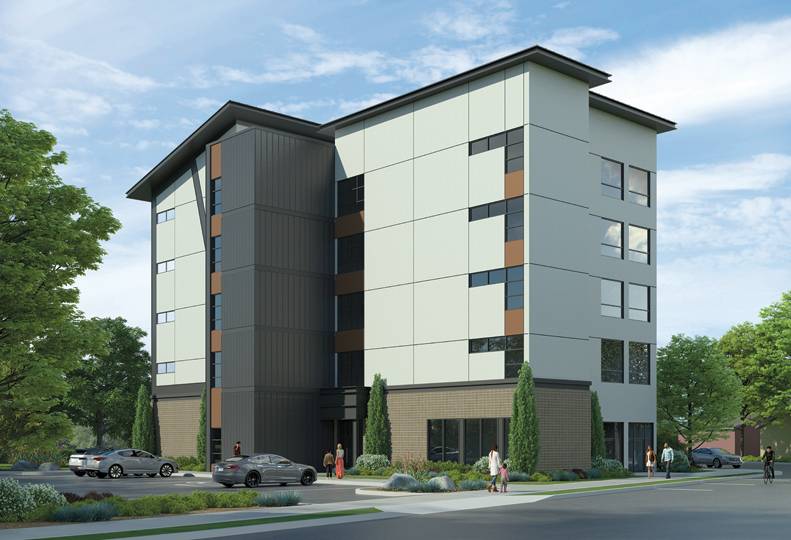 Plans for Eastern Washington International Housing retail and residential project on the lower South Hill remain active, although the project is going through its fourth major design change.

The current building permit application, originally submitted in January 2021, was most recently set to expire May 21.

The planned five-story, 32,000- square-foot building will have three retail spaces on the ground floor and 37 living units.

The project site is at 2020 W. Seventh, which is at the northwest corner of Seventh Avenue and Cannon Street, just south of Interstate 90, near the Vinegar Flats neighborhood. The land is owned by a company headed by Namva Chan, who is spearheading the project with her nephew, Johnathan Chan. The Chans couldn’t be reached immediately for comment.

“It was going to be more of a dormitory-type feel,” says Page.

Page says each unit originally was designed with a kitchenette with a sink, refrigerator, and microwave oven space, but no stove. Each residential floor, however, had been designed with a commercial-type kitchen to be shared by tenants.

“Then, the city didn’t like that idea,” he says. “We had to change the whole site plan … as if they were (full) apartment units.”

The changes included deemphasizing communal living, putting in full kitchens with stoves in each unit, and providing additional parking with a total of 47 stalls.

Page says the latest extension to the building permit application processing period was approved to give time to update drawings for mechanical and electrical systems.

“Now, that’s all in, and the permit should be ready in the next few weeks,” he says.

The Spokane office of TD&H Engineering is providing engineering services.

Page says the Chans currently are seeking additional financing and selecting a contractor.

The initial construction valuation for the Eastern Washington International Housing project was estimated at $4.5 million to $6 million. Page declines to disclose whether recent inflation and supply-chain issues have increased the earlier cost estimate.

He says the project has had some interest from investors from China. Johnathan Chan had previously told the Journal that the developers were seeking financing through multiple sources, including what’s known as the U.S. Citizenship and Immigration Services EB-5 program, in which foreign investors can participate in a limited partnership that develops a significant project for the prospect of securing U.S. citizenship.

Spokane developer Jordan Tampien, who was involved in the project last year to assist the Chans through the planning process, says he’s no longer connected with it.

Tampien helped focus on residential aspects to make the space more affordable to college students and young professionals, but initial bids on the project came in higher than expected, he says.

“They put a pause on it and hope to revisit it this year,” Tampien says. “We all know that housing is needed.”

Namva Chan acquired the 1-acre project site and four smaller contiguous parcels between 2015 and 2018 for a total of $128,000, Spokane County Assessor’s records show.