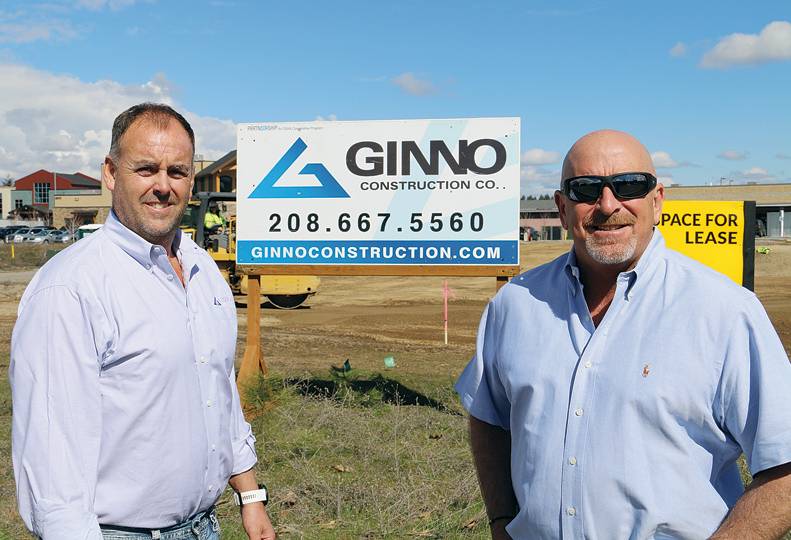 -—LeAnn Bjerken
Ginno Construction Inc. executives Rich Wells, left, and Kris Pereira say the company’s annual construction volume has been at about $46 million each of the last two years.

Executives with Ginno Construction Co. say their company has seen enough growth in recent years that it’s now considered to be the largest building contractor in Coeur d’Alene.

With a backlog of work well into 2020, they don’t anticipate a slowdown anytime soon.

“For the last two years, our construction volume has been at about $46 million,” says Ginno’s CEO and company founder Kris Pereira. “In terms of size, I believe we’re among the top construction firms in the region, and almost certainly the largest in Coeur d’Alene.”

Pereira says the company expects to grow by 20% this year. “That includes project volume, staff, and profitability, as each of those kind of follows the other,” he says.

Pereira says the company already has a large backlog that stretches well into 2020.

“In our industry we’re constantly working ourselves out of work, so we’re always looking for new projects,” he says. “Some are the shovel-ready ones that you bid on and start within weeks, while others are projects that take a while to cultivate and develop first.”

Pereira says Ginno was originally a California-based construction company that started in 1992.

“I started a regional office in Idaho, and we eventually broke away from the California operation in 1999,” he says. “We chose Coeur d’Alene, because we saw that this area had a high quality of life, and there was room to grow.”

Rich Wells, president of Ginno, says the company has 57 employees, about 25 percent of whom are new hires who joined its staff within the last two years.

“We’ve maintained a staff of over 50 people since the spring of last year,” says Wells. “Part of that is due to our dedication to better training and increased hiring from within. We have many senior employees training new hires, and we’re also involved with area apprenticeship programs to get new folks started.”

Wells says most of the company’s projects are in Idaho, Washington, and Montana, and most of its work takes place within 150-mile radius of Coeur d’Alene.

“We also pursue some work in California and Nevada,” he adds.

“We have a skilled building division as well, called Ginno Steel,” says Pereira. “We started that in 2012 and about 19 of our total employees now work on that side of the business.” He says Ginno Steel primarily works on pre-engineered metal buildings, post-frame construction, metal roofing, and metal siding projects.

“As a company, we pretty much run the gamut on anything commercial or light industrial,” he says. “We do a lot of public works projects like schools, hospitals, and office buildings. We do some residential work, but lately we’ve been so busy with other projects that we’ve backed off from those a bit.”

Brian Longwell, Ginno’s manager for the project, says the building will be a multi-story, 30,000-square-foot facility that will serve as an interagency office space for the U.S. Forest Service and Bureau of Land Management.

“We started work at the beginning of April and expect to finish the project by late May of 2020,” he says.

“It’s about a 60-40 split right now, perhaps being a bit heavier on the private-sector side,” Pereira says. “We’re also generating some of our own work through our development side.”

One of those new development projects is a $6.5 million luxury condo project in downtown Coeur d’Alene, called Seven27.

Pereira says the project will include a three-story building with eight living units and an underground parking garage.

“We started the idea for this project about three years ago and just got started on construction this month,” he says. “The plan was to develop a building that would fill the need we were seeing for living space in downtown Coeur d’Alene.”

Pereira says the condos were designed by Coeur d’Alene-based Miller Stauffer Architects, which is also a partner in developing the project.

“We expect the Seven27 project to be completed by the end of the year,” he says.

Pereira says the company has been fortunate to grow in volume every year, even during the Great Recession.

“A big part of our growth at that time was due to the fact that we have a really good bonding capacity that gave us the ability to take on public works and shovel-ready projects,” he says.

When the company’s leaders realized an economic downturn was on the way, “they made a conscious decision not to participate in the recession,” Pereira says.

“Instead we said ‘we’re going to figure out a way to keep going,’ and we did,” he says. “We decided to invest more in our people and updating our systems so that when the recession came, we’d be prepared and hit the ground running.”

He says Ginno still tries to stay ahead of construction technology, which is constantly evolving.

“This industry is behind a lot of others when it comes to technology, but we do our best to stay on top of it, and train our staff to embrace it,” he says. “A lot of the new technology coming out includes project management software, things that make it easier to schedule and estimate costs of projects.”

Pereira says Ginno’s recent growth also has been fueled by the fact that it operates in Coeur d’Alene, which is considered a desirable place to live, work, and retire.

“There are a lot of people moving to the area, and they’ll need better infrastructure to support things like schools, medical facilities, and commercial construction,” he says. “There was a bit of a pent-up demand left over from the recession that we’re also starting to see break loose now.”

Pereira says community connections are a big focus for Ginno, as it gets most of its clients through the work it does for public schools, educational institutions, nonprofits, and neighboring companies.

He says the company supports several area nonprofit organizations including the Court Appointed Special Advocate program, which trains guardians for neglected children; Tesh Inc., a nonprofit that provides opportunities to people with disabilities; and a youth center called Young Life.

“I’m part of CASA’s board, and also a member of its building committee,” he says. “CASA recently procured a new building, and Ginno is renovating it. We’re donating our time and materials, as well as helping them to generate additional donations that will go toward construction. They should be able to move in by early August.”

Pereira says Ginno is also working to build two new 5,000-square-foot retail buildings next door to its Coeur d’Alene office, one that will serve as a Vision Source location, and the one that will be a multi-use tenant building.

On the public side, Wells says last year Ginno was awarded two large public-school projects, a $7.1 million bid for the Coeur d’Alene High School expansion, at 5530 N. Fourth, and a $5.8 million contract for improvements to Lake City High School, at 6101 N. Ramsey Road.

“Those were good projects for us,” says Wells. “Historically, we’ve done a lot of work with the Coeur d’Alene school district, and we’ve done a majority of the school remodels and new construction for them in the last 10 years.”

Wells says Ginno is currently one of the contractors for the $4.5 million Lakes Middle School project at 930 N. 15th and is working with North Idaho College on a $6.5 million Collaborative Education Building, which will be completed in June.

Despite its growth, Pereira and Wells say Ginno has had some challenges in recent years, including finding skilled labor and adjusting to increases in the cost of building materials.

“Many people exited the building trades in the recession, but we’re starting to see a resurgence of interest in construction careers now,” says Wells. “Skilled labor is always a challenge, but we’ve been fortunate to have a low employee turnover, which helps.”

When it comes to the increasing costs of building materials, Pereira says the company also hasn’t been immune.

“Costs are increasing, and we have seen a good hike in price on some materials,” he says. “The steel tariffs in particular affected our metal building business, and we lost a few projects because of that.”

Wells says the company also saw some projects cancel due to owners not being able to find enough necessary funding.

“For a while there, banks were a bit tighter with lending, and that led to some projects drying up,” he says. “That issue has relaxed a bit recently, but I’m not sure if that’s a reflection of banks having lightened up on lending or if it’s just due to pent up demand.”