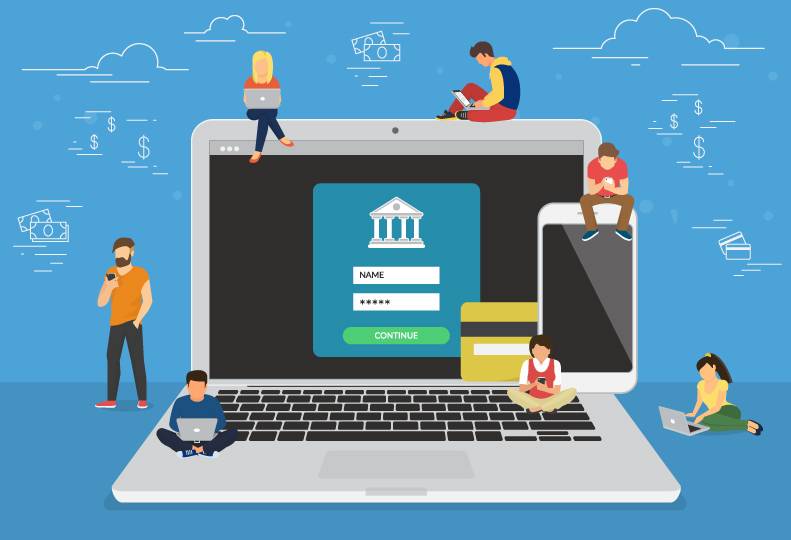 With banks limiting contact between employees and their customers, the use of digital and mobile banking tools that the institutions have been investing in for years have seen sudden, dramatic spikes, Spokane-area financial industry representatives say.

Meanwhile, a report from Fidelity National Information Services, which works with 50 of the world’s largest banks, shows a 200% jump in new mobile banking registrations in early April, and mobile banking traffic rose 85% over the same period.

Banner Bank, which is headquartered in Walla Walla and has 14 locations in the Spokane area, has seen similarly staggering numbers on both its consumer and commercial sides, says Kelly McPhee, Spokane-based vice president of communications.

Compared with the average enrollment in the 10 months leading up to April, the bank saw 195% increase in wire enrollments and usage in April alone, McPhee says.

“We’re all figuring out new ways to do everyday things that we need to do, including businesses,” says McPhee. “We’ve got a combination of things. We’ve got the stay-home order. We’ve got people wanting to be cautious. We’ve got a lot of different elements in play that might be motivating people to embrace the new technologies.”

Positive pay, a service that provides check fraud protection by contacting customers when someone tries to cash a check from them, saw a 31% increase in use April, she says.

The bank also plans to roll out a new service in the coming weeks that will allow a snapshot deposit for businesses, through which companies can take photos of multiple checks at once and deposit them, much as a consumer would do with a single check.

McPhee says she anticipates seeing similar gains for May, however, she contends that the person-to-person relationships will always be an essential part of banking.

A study by J.D. Power shows overall customer satisfaction with retail banks tends to decline as customers shift to digital-only. Branch-dependent customers provided an overall satisfaction score of 824, out of 1,000, which was 23 points higher than digital-only customers.

Kelley Ferguson, chief administration officer at Numerica Credit Union, says Numerica saw an 11% increase in mobile deposits year-to-date through May, compared with the mobile deposit activity in the year-earlier period.

That’s still lower than the credit union had projected for the first quarter of 2020, but Ferguson attributes the lower-than-expected gains to several businesses being shut down in wake of the pandemic.

Numerica saw a 27% increase in total dollars processed and a 130% increase in mobile banking logins through the first five months of 2020 compared with the year-earlier period, he says.

“It’s been encouraging to see our businesses that are using the services and the continual growth in that even through this pandemic,” he says.

Ferguson says the credit union was prepared to handle the spike in use of its digital tools, having made investments in bandwidth and controls to help quell any service disruptions.

Looking forward, the longtime Spokane-area credit union, which has 428 employees in the region, is exploring more social distancing technology that allows for one-on-one interactions with bankers using a video platform, Ferguson says.

The service is being tested at the Sullivan branch, and Numerica hopes to have it more widely available soon, he adds.

At Wells Fargo, which has seven Spokane-area branches and about 150 employees, Spokane district manager Woody Missamore estimates the bank has seen a 12% to 15% increase in use of mobile banking services among Spokane customers over the last two months.

“Customers are much more willing to discuss options to help save time, and it’s really provoked some great conversations with customers on downloading our mobile apps and using our bankers and providing that education around that mobile deposit,” Missamore says.

The bank is updating its mobile offerings continually, he adds, but the most popular service seems to be the mobile deposit feature that provides customers the capability to take a photo of a check and deposit it to their account without having to step foot in the bank.

Wells Fargo offers several options for mobile banking for businesses, most of which overlap with their consumer services. Businesses can use tools such as ACH, Zelle payment disbursal, and Control Tower, which allows companies and individuals to monitor recurring payments through Wells Fargo’s digital platform.

Since the pandemic hit, the bank also has launched online request options for mortgage payment deferrals, provided digital applications for the PPP loan program, and raised limits for mobile deposits.

Companywide, San Francisco-based Wells Fargo has seen a 23% increase in customers signing in to its digital platform between mid-March and the end of April, says Ben Soccorsy, head of digital payments.

The number of dollars associated with mobile deposit alone increased 81% in April compared with the year-earlier month, he adds.

The pandemic has simply accelerated that process, Soccorsy claims.

“(It) is going to be an accelerant to the adoption of mobile and digital banking in general,” he says. “The thing that we can do is to listen to our customers and recognize specifically where the areas are that they’ll have longer-term, persistent needs.”

Wells Fargo has nearly 31 million active digital customers, up 3% from 2019, he says. Mobile banking customers have grown at a similar clip to over 25 million customers, he adds.

There is a lot of overlap between the ways to interact with the bank, Soccorsy notes.

“I believe that some changes in behavior that we observe through the COVID time will stick around, especially related to digital banking,” he says. “… I suspect that there may be aspects of how we interact with our customers that’ll never go back to the way they were.”