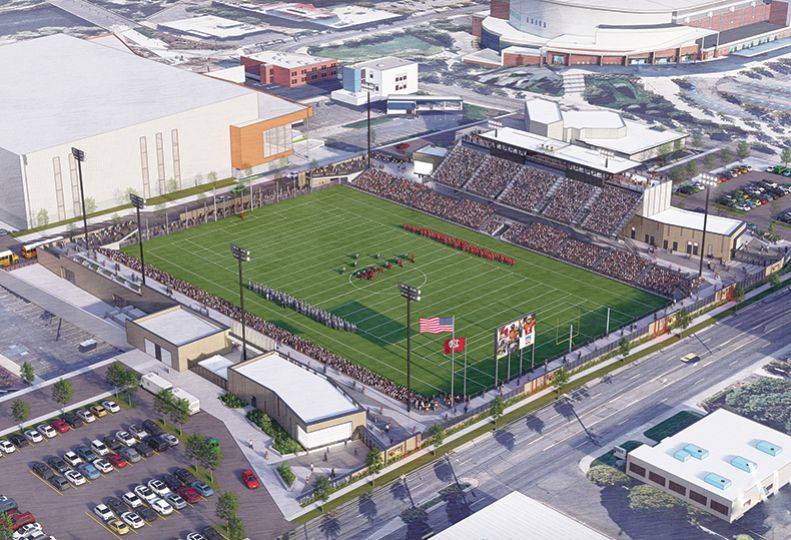 -—ALSC Architects
The new stadium project, which is being built just east of the Spokane Veterans Memorial Arena, is one of a handful of large projects for which building permits have been issued this year.

Overall permit activity in the first half of the year has kept pace with the first six months of 2021. While residential permitting has slightly declined, commercial permit volumes have boosted the overall totals, according to officials with Spokane County and the cities of Spokane and Spokane Valley.

Commercial building permit activity in the Spokane area increased significantly in the first half of the year compared with the year-earlier period, with the county alone reporting permit valuations six times greater than a year ago.

Scott Simmons, CEO of Spokane County, says 75 commercial building permits, excluding mechanical and plumbing permits, have been issued through June, with a valuation of $106.8 million. In the year- earlier period, the county issued 29 commercial permits with a total value of $16.5 million.

New home permitting has declined so far this year to 146 permits issued, from 240 in the first six months of 2021, Simmons says. Permits issued in the first half of last year were valued at $58.4 million, compared to $33.1 million through June this year.

“It doesn’t necessarily indicate things are slowing down,” he says. “Developers and single-family homebuilders are champing at the bit to continue moving things through.”

He adds that he expects residential permitting to increase as additional lots get approved and come online.

“Depending on when plats get approved and when developers get working on building lots, it could lead to a trend line that’s not telling all of the information,” Simmons explains.

He says he believes activity will trend upward in the second half of this year because lots of plats that have been finalized recently.

“I expect that we’ll see a lot more shovels in the ground for building permits once the plats get issued,” he adds.

Four of the top five highest-valued commercial projects permitted through the county so far this year are on the West Plains. They include:

•Two permits for a total of $16 million at the Douglass Legacy Park, at 5010 S. Thomas Mallen Road.

The fifth highest-value permit was issued for an $8.6 million Knife River Corp. project, in the Newman Lake area.

City of Spokane director of community and economic development Steve MacDonald says permits issued through June have grown 3% from the year-earlier period, and have climbed 31% compared with the first six months of 2020.

“2021 was kind of an anomaly because of a change in the state energy code that drove a lot of permitting activity, at least the submittal of plans, to get in by a certain date,” MacDonald says. “That caused a spike in the spring of 2021, so we like to compare 2022’s numbers to (both) 2021 and 2020.”

A 2018 Washington state Energy Code that went into effect Feb. 1, 2021, introduced changes in regulations intended to reduce the environmental impact of new construction, including new requirements for windows, heat pumps, and service panels.

MacDonald says requirements under the previous version of the energy code would’ve been less expensive to meet than the updated code, so homebuilders expedited plan submittals to avoid those increased project costs.

“The single-family homes in 2021 spiked because of that energy code issue that really seemed to impact residential permitting.”

The total number of permits processed has grown 5.7% through June, to 11,878, from 11,373 in the year-earlier period, although permit valuation has declined 6% in the same timeframe. Permit valuation is $322.2 million through June, compared with $342.8 million a year earlier.

The largest commercial projects in plan review, which have been approved but not issued yet, include the $45 million Jubilant HollisterStier expansion and the $35.3 million Radio Park Apartments.

Jenny Nickerson, building official for the city of Spokane Valley, says 2,290 permits have been issued through the end of June.

The total permit valuation through the end of May is $123.2 million, she says.

Nickerson says those permits include a variety of permit types such as adult family home conversions, solar installations, and signage.

Spokane Valley has permitted 22 commercial projects valued over $1 million each through the end of June.

The highest-value project permitted in Spokane Valley so far this year is the Carnahan West Apartments, at $15.9 million; followed by the $12.5 million PODS storage warehouse, the $11 million Spokane Valley Library project, and a $7.8 million Barker Logistics Center building.

Increased construction costs are likely a factor in higher permit valuations, she says.

Nickerson says starter multifamily projects are picking up steam with builders who have been transitioning from single-family developments.

“Starter multifamily would generally be four-unit townhome buildings in the R4 zone,” she explains. “R4 is the highest density single-family residential zoning district and allows for 10 dwelling units per acre, including townhome buildings of up to six units in a building.”

Nickerson says this year’s permit activity has been robust, and she expects that permits will keep pace with 2021 for the remainder of the year. She notes activity could change by year-end if developers delay construction after receiving permit approval, due to growing material and labor costs.

Both MacDonald and Nickerson agree that increased construction costs are likely a factor in the higher permit valuations reported now and will continue to play a role going forward.