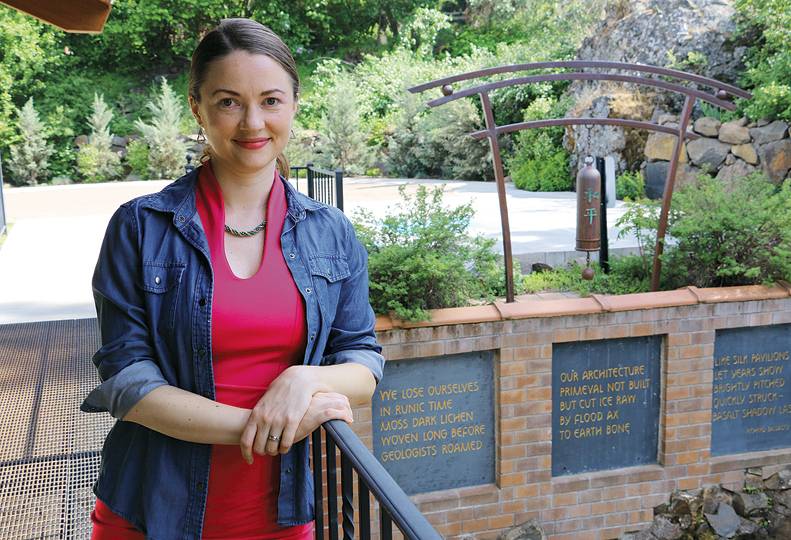 -—LeAnn Bjerken
Mariah McKay is part of Haystack Heights Cohousing, which hopes to develop the first cohousing development in the Spokane area on 3 acres near Spokane’s South Perry District.

A new community called Haystack Heights, which organizers say will introduce the cohousing lifestyle to Spokane, is about to take shape on a 3-acre property near Spokane’s South Perry District.

Community organizer Mariah McKay and her husband, Jim Dawson, are part of Haystack Heights Cohousing, a group that’s organizing the development of the property just southeast of the corner of Hartson Avenue and Garfield Street into the city’s first cohousing community.

“We hope to break ground on construction in early spring of 2020, and construction will continue for about a year and a half,” says McKay. “We hope to have families moving into the site by summer of 2021.”

She describes cohousing as a custom neighborhood made up of private homes clustered around shared spaces, that creates opportunities for collaborative living.

“Families living in the development will still have privacy in their individual homes but will also be able to build relationships in the community through shared spaces and lifestyles,” she says.

McKay explains that cohousing projects either can be senior or intergenerational in nature and can be built in rural, urban, suburban, or interurban environments.

“We committed to an intergenerational model fairly early on,” she says. “We then had to choose an environment. Since we knew we wanted access to green space, and the ability for residents to walk or bike to work, we knew the site would be either interurban or suburban.”

McKay expects Haystack Heights will be the first cohousing community in the Inland Northwest, with the next closest two communities being located in Nelson, British Columbia.

“There are only about 166 to 175 cohousing projects in the U.S., including about 27 on the western side of the state,” she says.

So far, McKay says the community has 25 member households, and six associate or junior members, who have paid some money toward membership. She says members pay a nonrefundable membership fee of $500, followed by an initial $2,000 down payment toward their home.

“Everyone is expected to be able to invest 20% of the cost of their chosen unit into the project before we reach bank financing,” she adds. “That’s not all required at once, but we do have a budget that members are tracking, and we will make scheduled cash calls throughout the construction process.”

While the project hasn’t yet gone out for bids, McKay says it currently has a projected total construction cost of around $13 million.

So far, she says the group’s member households have each contributed about 9.3 percent of the total cost of their chosen units, and the group is working to secure bank financing for a construction loan.

Originally, McKay says, units were estimated to cost between $243,000 and $410,000. However, increasing construction costs put building bids at almost 50% above that expectation.

“Through careful considerations and some redesigning, we’ve managed to get that down to about a 12% cost increase,” she says.

As part of the redesign, McKay says, the group eliminated one building and a pedestrian bridge and adjusted the location and size of the common house. The changes also have allowed for five more private units and the incorporation of additional green space.

The site will have three residential buildings and a common house in addition to an existing facility called the Haystack building, which includes five apartment units and two lofts that currently are used as a yoga studio, McKay says.

She says the residential buildings will have a mix of three-story townhomes and flats, each with one to four bedrooms. Upper units will have a deck, and ground units can include a front porch and a private backyard.

Buildings will be made of sustainable or recycled materials, and design features will include natural lighting and passive heating and cooling. Although the site won’t include roads or parking lots, some units will have underground garages available.

A 3,200-square-foot common house will be at the center of the property, and include a kitchen, lounge, laundry, two guest rooms, a kid’s playroom, a bike garage, and gardens.

Once established, Haystack Heights will use its homeowners association dues to meet the community’s food, heating, electrical, and other needs.

She says the group also has been working to remodel a former printing shed on the property into a shop for crafts, woodworking, music rehearsal, and an upstairs teen lounge.

McKay says the group has partnered with Portland-based Urban Development+Partners to develop the site and is working with Yost Gallagher Construction LLC, of Spokane, on project pricing.

In February 2017, the group hired Katheryn McCamant, of Nevada City, California-based CoHousing Solutions, as a development consultant for the project. McCamant has visited the group several times to aid in planning for the project. She and her former husband, Charles Durrett, are co-authors of a book called Creating Cohousing, which the Haystack Heights group used as a guide to getting started.

McKay says both she and Dawson are community organizers, who also operate their own co-living company, Our Natural Homes, which helps tenants find and rent single-occupancy rooms with shared common spaces.

The two currently own the historic Frank Swenson house, now called the Haystack Hotel, at 907 E. 8th, just north of the planned cohousing development, and operate it as co-living space for themselves and four other tenants.

McKay says that Swenson, a stonemason who founded the company that later became Washington Stone & Tresko Monument, built the 2,200-square-foot home in 1895. It was later purchased by the Lawton family, which started their printing business, Lawton Printing, out of a shop in the property’s backyard.

She says the home was purchased by artists Lars Neises and Rebecca Laurence, who lived there for 30 years and slowly purchased the lots surrounding the property. The two built a multi-use building known as the Haystack building on the site’s northwest corner in 2012.

Neises and Laurence sold the Swenson house and surrounding property to McKay and Dawson in 2017 and used the money from the sale to build their current home nearby.

“We purchased the home and 1 acre of land from them in 2017, as a down payment on the cohousing development,” McKay says. “They heard about what we were doing and were willing to sell to us because they felt our vision for the site fulfilled their dreams for this land.”

McKay says the Haystack Heights’ development company, Perry Group LLC, was able to purchase the remainder of the land at the site in May 2018.

“The Perry Group is owned by each of our member households, who all have a vote in development decisions,” she says. “Essentially, it’s a custom condominium development that future residents are designing, managing, and building out together.”

She says the design of the community was a participatory process with the group meeting periodically to agree on various features they wanted. Once the development is built, the Perry Group will become the Haystack Heights Cohousing Home Owners Association.

“We kept a record of how and why we arrived at the decisions we did, so that as new members come on board, they can read it and understand the purpose behind it,” she says.

Haystack Heights also is considered an infill project, which McKay asserts works to fit new construction into the existing developments and landscape as much as possible.

“We feel like the best kind of development happens incrementally,” she says. “It’s hard to anticipate the best way to use a space before you’re in it, but if you build up over time it’s easier to determine what’s going to work without disturbing the existing structures or natural spaces.”

McKay says the group was lucky in that the site was already zoned for multifamily use, which saved time and money in the development process.

“As community organizers, Jim and I have a unique perspective on how our built environments shape our culture, and we’ve been waiting to start our family until we can live in cohousing,” she says. “We believe that in modern society, there are structural and environmental factors that are working against building trust and relationships with our neighbors. But in order to engage with and support one another, we need to have an environment that fosters those relationships, which is what cohousing helps to do.”

“We plan to share garden and orchard spaces, harvest food, and eat at least five meals a week together in the common house,” she says. “We’ll also have recycling and composting programs, as well as shared childcare and play areas.”