Hazzard Fab Worx races to keep up with demand 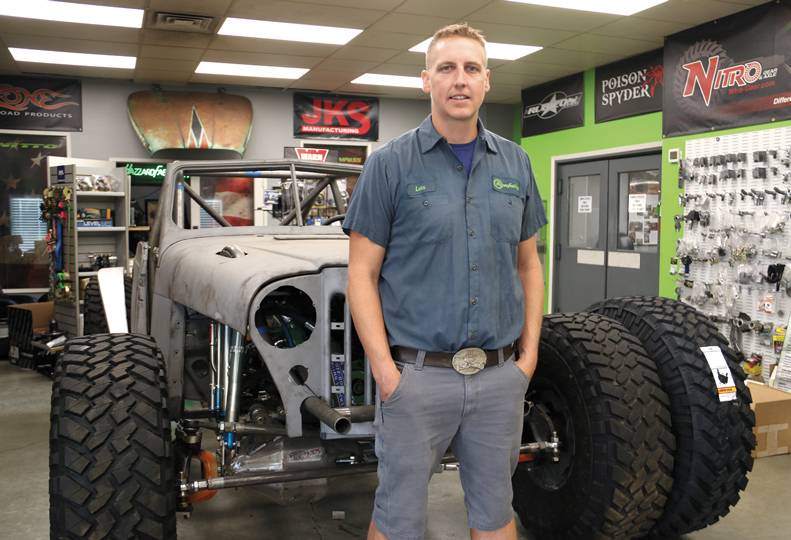 “The last year has been super hard, because COVID not only interrupted the supply chain and made parts harder to get, it seems like everybody wants to work on their vehicles,” Shuman says. “Maybe people are deciding to fix up their vehicles instead of buy new. Demand is insane right now.”

However, Shuman says the effects of the COVID-19 pandemic on manufacturers have made pre-made parts, such as shocks and suspension lift kits, harder to find.

“It’s made it more difficult to do the same job we’ve always done,” Shuman says. “We have to spend a lot more time looking for those parts. The supply chain got interrupted, and demand got high, and I think it’s going to be a while before that’s back to normal.”

A typical job that might have taken two weeks to complete now takes double that, Shuman says.

Hazzard also provides maintenance and repair services for custom modified vehicles, which Shuman says other shops might be unable to do.

“We end up fixing a lot of trucks that are modified because we’re familiar with the parts,” he says. “We have our own alignment machine and stuff like that, so it’s all done here.”

Shuman says often the trouble a vehicle owner is experiencing after installing an aftermarket part, such as a suspension lift kit, can be easily remedied.

“There’s either something loose, or a lot of times, people just align those back to factory specs, but it’s not a factory vehicle anymore,” he says. “You have bigger tires, for example, so you need different alignment specs to make it drive right with the different parts.”

Shuman, who was born and raised in Spokane, says he noticed the gap in the local industry more than a decade ago.

“There was one off-road shop, and the set-up there was different than I desired,” he says. “They didn’t have the ability to do a lot of jobs at once. They sold a lot of parts, but they didn’t put on a lot of parts.”

In 2009, Shuman quit his job and created Hazzard Fabworx. He initially worked out of his home’s two-car garage, he says.

Hazzard became involved in building Ultra 4 vehicles, which are used in desert four-wheel drive racing. Shuman says he was involved in racing for years, and could return to it, but is currently focused on growth of the shop.

In 2012, Shuman hired his first employee, and Hazzard Fabworx became a two-man operation. Around that time, the shop was selected by 4-Wheel & Offroad magazine as the official fabrication shop of the 2012 Ultimate Adventure, a nine-day off-roading adventure trip.

Hazzard created an unusual vehicle for the trek, Shuman says.

“We built this double-ended orange Jeep, and started doing more big builds like that,” Shuman says.

The shop moved out of Shuman’s garage, and had a few locations in Spokane before it bought its current location, a 20,000-square-foot shop at 3023 E. Trent, about six years ago.

Shuman says Hazzard has traveled throughout the country to attend events such as races and custom vehicle shows, which have brought the company attention and business.

“People ship us their trucks from all over,” Shuman says. “I’ve shipped stuff to the Middle East. A month ago, we had some customers drive up from Florida to have us do three days of work to their van.”

Shuman has a stack of resumes on his desk, but he says finding someone who understands and is capable of performing the custom work Hazzard does is a challenge.

“We get a lot of resumes when we put job postings out there, because everybody thinks it’ll be cool to work here — and it is a great place to work — but I can’t just hire anybody and teach them,” Shuman says.

Shuman says he doesn’t have plans to expand the shop or relocate.

“The last couple of years, we’ve grown quite a bit — we’ve grown at big percentages since 2009, really,” he says.

For now, Shuman says he wants to focus on Hazzard’s bread and butter.

“Lately, we’ve been more focused on our craft and what we do and what we’re good at,” Shuman says. “That’s where I want to be — that niche of putting out a high-quality product and making sure when it’s done that everything about it is right.”