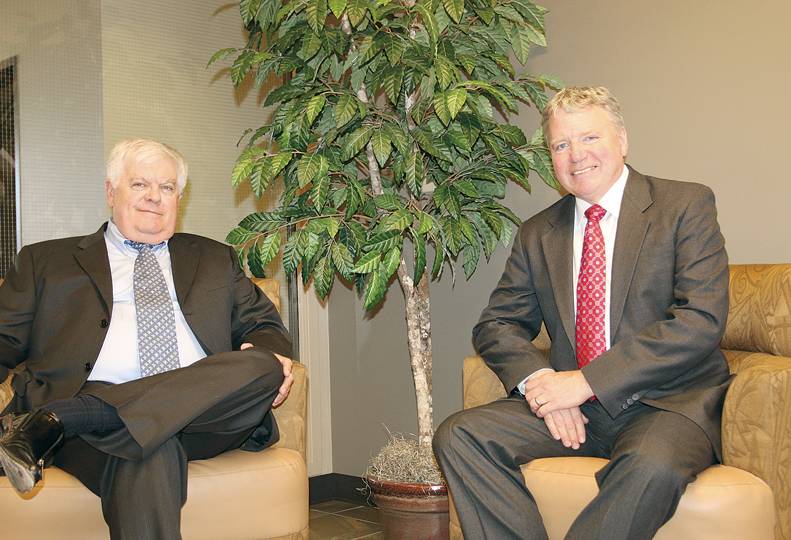 -Journal of Business
Jim Simmons, left, and Peter Chase posed for this photo during better times in 2015, around the time Chase became an executive in ICM Asset Management

A three-person panel of arbitrators has ruled that a long-time Spokane investment company and its owner didn’t breach its fiduciary duties, nor did it commit fraud, as claimed by a Spokane businessman who had invested in the company.

The decision stems from a claim filed by entrepreneur Peter Chase against ICM Asset Management Inc. and its founder and operator, Jim Simmons, as well as the company’s chief compliance officer, Lisa House.

Chase accused Simmons of breaching fiduciary duties, negligence, and misrepresentation and breach of contract, but the arbitration panel dismissed all those claims.

In their decision, arbitrators write: “Unquestionably, there was a great deal of sloppiness in the way ICM was conducting its business. This appropriately caught the attention of the SEC as it presented a potential for harm to clients and the public. However, insofar as the SEC examination adduced facts, those facts do not establish any wrongful conduct as to Mr. Chase or any injury caused to him. Nor does the remainder of the evidence presented.”

The panel rejected considering the claim against House as she’s not a financial adviser.

In the summer of 2016, the Securities and Exchange Commission started conducting an examination of ICM that led to a Nov. 30 letter from the SEC to the company identifying “deficiencies and weaknesses in controls” in ICM’s operations, arbitrators write.

Susan Nelson, a Spokane-based attorney for the law firm of Dunn & Black PS, represented Simmons against the claims.

“This case should’ve been resolved without litigation,” Nelson contends.

Arbiters also concluded, however, Simmons still owes Chase $469,000 for money that Chase loaned the company in his efforts to keep ICM in business.

Jeremy Hyndman, Chase’s Walla Walla-based attorney, in an email to the Journal, says, “Pete bankrolled ICM for almost three years, using his own money to make sure ICM employees got paychecks.”

He adds, “Regarding the hundreds of thousands of dollars Pete loaned ICM and sued to recover, ICM hasn’t repaid a dime.”

ICM still operates in downtown Spokane. Chase’s attempts to start a separate financial advisory firm, Manito Asset Management Inc., after breaking away from ICM never got off the ground.

One local financial adviser says it’s not uncommon in business for partners and associates to have to move in their own separate directions.

“Oftentimes, there are lawsuits and threats of lawsuits,” says Kyle Weir, a senior vice president and senior portfolio manager for RBC Wealth Management, in downtown Spokane. “Being in a partnership is a lot like being in marriage. It’s best to have safeguards in place so you can each have protection.”

Arbitrators write that Chase and Simmons did neither. Their 21-page ruling paints a picture of a company that has been struggling for two decades now.

At its zenith, ICM had 2,000 clients and managed more than $2 billion in assets, arbitration papers say. Today, the company has $150 million in assets managed with 150 to 200 clients.

Arbitration documents say Simmons and Chase met sometime around the year 2000 when Simmons became an angel investor in Purcell Systems Inc., a manufacturer of temperature-controlled outdoor cabinets for the telecommunications industry that Chase was involved in starting.

“This business also became successful, and when Mr. Chase was ready to sell it and move on, he placed his personal investments” with ICM, the arbitration panel writes.

Those investments, placed in 2012 and 2013, totaled about $3 million, arbitrators write.

Thereafter, the two men would get together regularly to discuss not just investment strategies but other business, civic, and personal issues of mutual concern. Along the way, Simmons made Chase aware of the cashflow problems that ICM eventually began to experience, arbitrators write.

Simmons founded ICM in 1981. In an interview with the Journal in 2015, Simmons said ICM grew “very fast” in the late 1990s and early 2000s, when it managed a peak of 2,000 accounts. One of those clients was a large, public plan in Los Angeles, which Simmons wouldn’t identify.

ICM had $2.25 billion in assets under management at that time, according to arbitrators.

Simmons acknowledged that the California plan’s representative moved assets to another financial management company in 2007, citing dissatisfaction with ICM. It helped contribute to a mass departure of customers, the Journal previously reported.

Arbitrators say it was against that backdrop that Simmons and Chase began their partnership.

No longer working with Purcell and starting a new business as a consultant to EB-5 visa applicants, Chase had his own needs for office space and family medical coverage, according to arbitrators.

“Without a great deal of formality or fanfare,” Chase worked on his business and did some work for ICM in exchange for health benefits starting in May 2014, arbitrators write.

Chase’s position with ICM grew, and within a year, “he had quietly assumed the title of chief operating officer. Somewhat unusually, in addition to not receiving compensation, he was loaning cash to ICM to help it stay afloat,” arbitrators write.

Chase entertained “the not unreasonable hope” that the company would return to its former success, “and he was positioning himself to reap the benefits when that occurred,” according to arbitrators.

“But, in the spring of 2015, it remained far from there. Balance sheets, profit-and-loss statements, and cashflow projections that the controller Stephanie Perry shared with Mr. Chase in May of 2015 painted a vivid picture of ICM’s dire financial situation,” arbitrators write.

By early June 2015, Chase had loaned more than $200,000 of his own money to ICM. On June 5, all his outstanding debt was converted to equity by a securities purchase agreement that gave him 12.5% ownership interest in ICM, according to arbitrators.

“Much of Mr. Chase’s labors during this same time frame (before and after the conversion of debt to equity) were devoted to raising capital in order for ICM to get stabilized and Eagle Peak to be launched,” arbitrators write.

Chase also was leading an effort to negotiate the sale of ICM’s interest in a Chicago-based company named ProManage, which had been responsible for much of ICM’s debt burden. The deal closed by the end of 2015, but by September 2016, Chase “had grown tired of the fact that ICM continues to be under water each month,” according to arbitrators.

Meanwhile, the SEC was examining the way ICM had been conducting business, arbitrators write.

Chase proposed to Simmons that Chase take full ownership and control of Eagle Peak and expressed his inclination otherwise to simply walk away from it all, arbitrators write.

“The SEC noted that it was not making any findings or conclusions but was requiring ICM to submit a timely response indicating any corrective actions it planned,” arbitrators write.

The ensuing internal discussions led to the framework of a plan that would involve Simmons, 67 years old at the time, easing into retirement and receiving a regular revenue stream in exchange for transitioning his ICM clients to Eagle Peak, which would be owned and run by Chase and staffed by former ICM employees, according to arbitrators.

In December 2016, Simmons sent a letter to all ICM clients informing them that by March 31, 2017, “ICM will no longer be operating as an investment advisory firm,” arbitrators write.

The SEC was also notified of the change, arbitrators say.

“Despite those intentions and expectations, there was to be no winding down and no smooth transition,” arbitrators write in their findings.

“Despite Simmons’ encouragement, in late January of 2017, the most significant investor with ICM flatly refused to move his funds to Manito,” according to arbitrators.

The one holdout investor is said to account for 60% of ICM’s managed assets and 75% of its income, arbitrators write.

“This impaired not only Manito’s prospect but also the return to be realized by Simmons,” they say.

Since the end of 2016, the SEC has taken no further action with respect to ICM, which continues in business on a “greatly scaled-back basis,” arbitrators say.