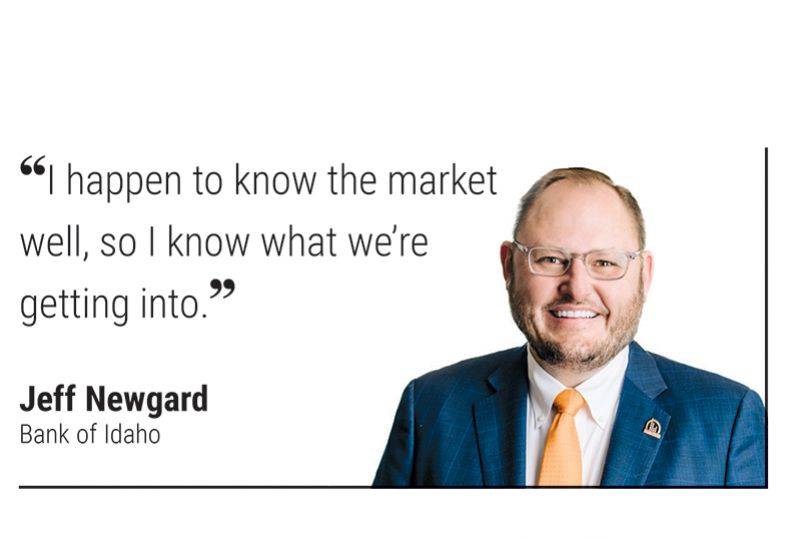 Last month, Idaho Falls-based Bank of Idaho agreed to acquire five branches from Seattle-based HomeStreet Bank, including one branch in downtown Spokane. That transaction, which also involves branches in Kennewick, Dayton, Yakima, and Sunnyside, is to be completed by Aug. 1.

Also in May, Idaho Central Credit Union publicly launched its first branch in Washington state in the former Banner Bank building, at 41 W. Riverside in downtown Spokane. ICCU purchased the 36,900-square-foot office building in November 2021 for $13.5 million for its Washington operations, its first of four planned branches here. In September, the credit union—which is based in Chubbuck, Idaho, just outside of Pocatello—plans to open a branch in the Northpointe Plaza shopping center, in north Spokane.

Jeff Newgard, president and CEO of Bank of Idaho, says he previously worked for HomeStreet.

“Ultimately, expanding our field of membership to include Washington was a strategic move that allows us to offer our products and services to more people in the Northwest,” he says. “We already had many members in the area, and since we’re a full-service financial institution, it just makes sense to have branches here that are available to help them.”

Both Newgard and Hochheimer contend Washington-based customers don’t care where a financial institution is headquartered; they’re concerned with what the institution does for them.

“The name, the logo—people don’t bank with that,” Newgard says. “People bank with their banker. That’s where that trusted relationship is critical.”

Bank of Idaho aims to create an “intermountain regional bank” and could acquire additional Washington branches as part of that strategy, he says.

“Even though (real estate costs) have increased, we still may see purchase opportunities,” Newgard says.

Spokane is growing, Hochheimer says, and financial institutions will harness some of that growth.

“You’re going to start seeing a lot of this regional banking for financial institutions, specifically for credit unions, where they’re going to expand either organically or through mergers and acquisitions,” Hochheimer says. “There’s so much going on in Spokane.”

Newgard says that small and mid-size commercial lending is Bank of Idaho’s forte.

“We can go over $20 million in loans, but our sweet spot is in that $10 million to $15 million range,” Newgard says. “Within the space that we’re going to offer small business loans, we’re going to be extremely competitive.”

Hochheimer says that among bankers in eastern Washington, good will toward each other typically runs high.

“The financial industry here in Spokane plays really well together,” Hochheimer says. “The tone has been set well by the leadership at these financial institutions to do what’s ultimately right for the community.”