About $500 million in development planned over 20 years 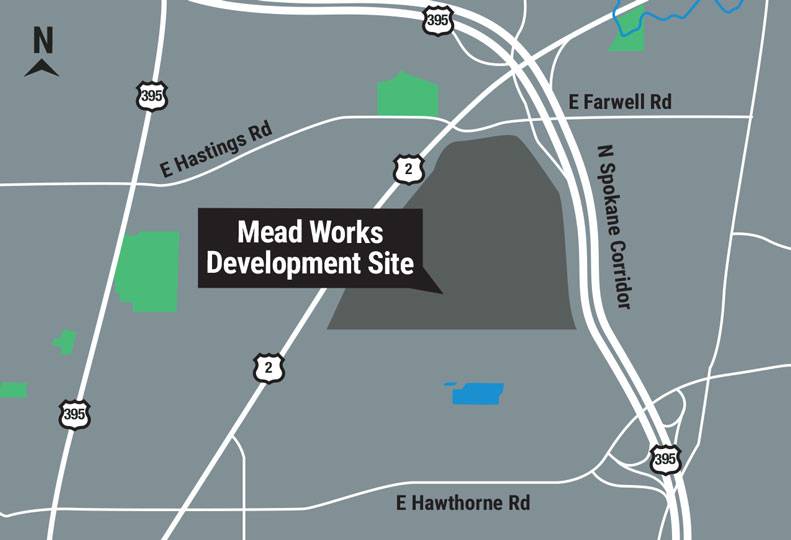 The Greenstone Corp. family of companies, which is based in Liberty Lake and is behind Kendall Yards and a number of other developments throughout the Spokane-Coeur d’Alene area, plans to start infrastructure work later this year on its newest neighborhood, Mead Works.

To be located on 420 acres north of the long-defunct Kaiser Aluminum smelter north of Spokane and next to the north Costco Wholesale Corp. store, the development eventually is expected to be home to about 1,400 living units and 1 million square feet of retail space, says Greenstone founder Jim Frank. The value of the project has yet to be determined, but Frank says the total cost could exceed $500 million.

Bounded by Farwell Road to the north and Hawthorne Road to the south, between U.S. 2 and the North Spokane Corridor, the Mead Works site requires an extensive amount of infrastructure work, including roads and water and sewer lines. That initial work is expected to take until the end of 2022 to complete. Some environmental cleanup work will be addressed as well, but much of that work already has been completed.

“Vertical construction” of the first living units will start next year, Frank says. In all, the site is expected to take 20 years to develop.

The site is in an unincorporated portion of Spokane County and is zoned for mixed uses. As envisioned, Mead Works is characterized as a master-planned mixed-use urban development. For the residential component, Mead Works will have a mix of conventional single-family homes, cottage-style houses, townhomes, and apartments, with a senior-living element likely as well. Market demand will dictate the type of commercial development on the site, but Frank says he envisions some mixed-use buildings, with street-level retail and living units on upper floors.

“It’s not quite as dense as Kendall Yards, but along those lines,” he says.

About 40 acres of open space is planned in the development, as is a series of trails that are designed to make it a walkable, bikeable neighborhood. Frank says the development also is well-positioned to take advantage of a future North Spokane bus rapid-transit line and completion of the North Spokane Corridor.