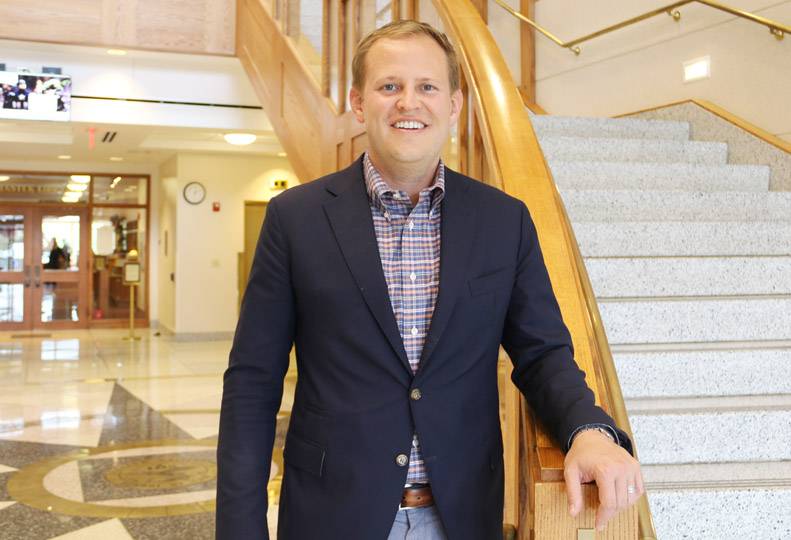 Jacob Rooksby, new dean of the Gonzaga University School of Law, says he’s looking forward to finding ways to make the school more innovative and to integrate it more fully into the Spokane and Gonzaga communities.

Rooksby was hired in June as dean and professor at the law school, as well as professor at the school of education. He comes to Spokane from Pittsburgh, Pa., where he was associate dean of administration at Duquesne University while serving in an of-counsel capacity at the intellectual property practice group at Pittsburgh law firm Cohen & Grigsby PC.

“It no longer is an economy where the biggest and most successful companies own the most physical things,” Rooksby says. “It’s more about the intellectual capital held by their employees and by the company. If you think of big tech companies and even small tech companies—and everything in between—intellectual property is fundamental to that.”

Rooksby plans to increase the role of intellectual property law in students’ legal education as part of a broader effort to implement more business law in curriculum. Some knowledge of business law—such as copyrights, trademarks, and patents—is crucial for all attorneys, except possibly those who practice criminal law exclusively, Rooksby claims.

It’s part of turning students’ passion in to practice while ensuring they’re competitive when representing clients in the innovation economy, he says.

Rooksby joins the school of law just as the institution and others nationwide are seeing a resurgence in enrollment following the recession. He says 146 first-year students joined the school of law this fall, up from 126 last year. In all, the school has 350 students and employs 80 faculty and staff.

While no single factor is driving the increase, he says, the current contentious political climate may be a factor in driving people to seek a law degree.

“The good news is not only do we have renewed interest in those pursuing a legal education here at Gonzaga, the credentials of the entering students have also gone up,” Rooksby says. “Our median LSAT score is up a point from last year. So it’s not only a bigger class, but it’s a stronger one academically as well.”

LSAT, which is short for the Law School Admission Test, is a standardized test for prospective law school students.

As part of his plan for institutional innovation, Rooksby says he intends to increase the range of the law school’s educational programs.

“For the longest time, law schools have been in the market only of providing legal education to (law) students, and this institution has done a fine job at that, but I’d like to see us expanding our offerings in terms of providing education to nonlawyers, alumni, and practicing attorneys, in forms and formats that may be less than a degree,” he says.

Those could include certificates or workshops, either online or in person, Rooksby says.

“To the extent we don’t provide them with that education, we’re missing an opportunity to serve, so we’re looking for ways to offer … education that may relate to certain sectors where we have strong representation in this region,” Rooksby says.

The school is also considering developing more niche areas of study for its students.

“We’re looking into developing a wine law emphasis because of our location near one of the world’s greatest and rapidly-growing wine producing regions,” Rooksby says. “We would be unique in offering that.”

Rooksby also is exploring ways to connect the institution with the community, with the goal of helping people understand how much laws affect society. He says the school’s students already are ambassadors to the community through their internships and working in the school’s law clinic, but he wants to bring community members into the school more often. One idea for facilitating that, he says, is a regular “law in film” series that would be held at the school of law. Another involves inviting local artists to display their work in the lobby of the building.

“The notion (is) that we want to lower the barriers to entry and have people view us as a vibrant, active part of the community, as an institution,” Rooksby says.

The school also is planning to partner with other schools at Gonzaga to provide community events, such as the Oct. 8 forum on school safety that will be held jointly by the school of law and the school of education. Kristina Anderson, a survivor of the 2007 Virginia Tech school mass shooting, will speak and moderate a panel that will include a school board member, a teacher, and a school safety officer.

“This can be a way for us to integrate with the community and to be of service to the community while providing programming that’s meaningful,” Rooksby says.

“It’s sort of our flagship platform for social justice education and action,” he says. “We have a longstanding commitment to social justice that’s manifest through our clinical work and we’re looking at ways to strengthen and continue that emphasis. We’ve been a leader in this realm for many years, but the center sort of brings to fruition a lot of the different threads of programming that we’ve been offering and allows us a national platform to speak on these issues.”

“Also, day in and day out, we’ll be providing opportunities for our law students to engage with the community in pro bono legal work and in other practical experiences where they can contribute to the betterment of the community as law students.”

As he works to increase community access to the school of law and provide a wider array of programs and resources, Rooksby says his own goals for his role as dean are to be visible in the community and to be accessible to students. He’s working toward both goals simultaneously through his official Instagram account, @ZagLawDean, where he chronicles events the law school hosts and student activities such as group hikes.