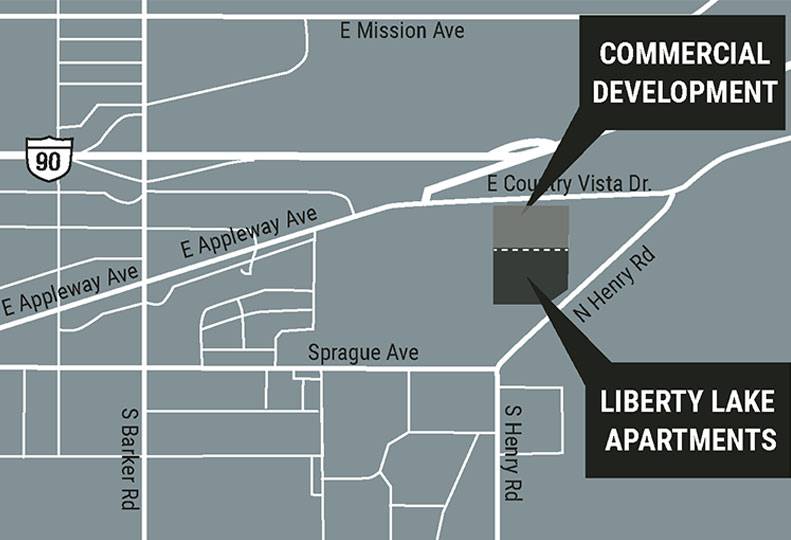 Menlo Park, Calif.-based construction company Katerra Inc. is proposing to build 408 units of middle-income multifamily housing on east Country Vista Drive, in Liberty Lake, according to documents filed with the City of Liberty Lake. Katerra also is proposing to construct a 344,000-square-foot commercial development next to the multifamily complex.

A notice of application proposes the division of a 37-acre undeveloped parcel near the intersection of Country Vista Drive and Henry Road into two lots, the smaller of which would be developed for the multifamily apartments, while the larger lot would be reserved for future commercial development.

A representative of Wolff Enterprises III LLC, the Scottsdale, Ariz.-based development arm of Katerra, couldn’t be reached immediately for comment on the project.

Katerra is currently building a 250,000-square-foot facility in Spokane Valley that will manufacture cross laminated timber products for use in construction. Cross laminated timber, a wood panel consisting of layers of wood glued together to form sturdy structural panels, is swiftly becoming a more common building material.

No documents have indicated whether construction of the multifamily units or the commercial development will utilize cross laminated timber.

The notice proposes to use 14.9 acres of the lot for a 408-unit multifamily development consisting of 17 three-story apartment buildings with 24 units to each building, as well as 10 garage buildings and a clubhouse.

The development will also include a swimming pool and spa, a pickleball court, gazebos, and a dog park area, as well as 663 parking spaces. The resulting apartment complex would be named Liberty Lake Apartments, documents show.

While no project value is listed on the notice of application, affiliates of Wolff Enterprises recently developed the River House Apartments and the Riverhouse II Senior Living Apartments, in Spokane Valley. Together the neighboring complexes have 348 living units and a combined construction value of nearly $30 million, according to earlier Journal reporting.

The notice of application also proposes construction of a public roadway that would run parallel with west Henry Road and intersect with Country Vista. A private access road along the eastern edge of the site is also proposed, documents show, for secondary access into the development from Country Vista.

The site currently is vacant and has been used historically for agriculture. On-site grading is expected to begin next month, documents state. The multifamily project is to be constructed in one phase.

No building permits have been filed for the project yet.