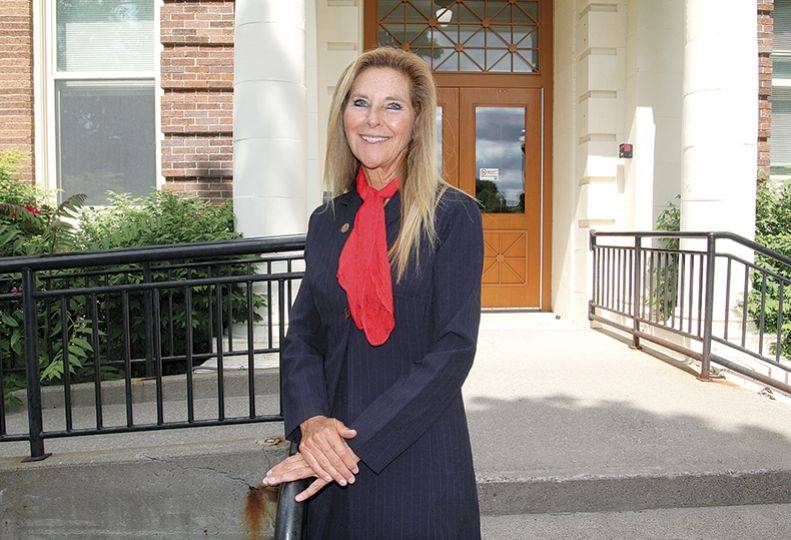 Shari McMahan began her duties as the 27th president of Eastern Washington University the last week of June, taking the helm after David May served as interim president for almost two years.

McMahan comes to EWU from California State University, San Bernardino, where she was that university’s first woman to hold the title of provost and vice president of academic affairs.

McMahan has spent most of her professional career teaching health sciences within the CSU system and transitioned into administration eight years ago.

A first-generation college student, McMahan grew up in Downey, California, in the Los Angeles area. She earned a bachelor’s degree and a doctorate in social ecology from the University of California, Irvine, and a master’s degree in health science from California State University, Northridge.

As president of EWU, McMahan will oversee nine directory boards and the annual operating budget of $316 million for fiscal year 2023.

The Journal recently sat down with McMahan to discuss her new role, her experience working with first-generation college students, and what she hopes to accomplish during her time at EWU.

Before becoming an administrator, you taught health sciences for several years. What drew you to that field?

When I was in college, I lost my father to esophageal cancer, and then years later, I lost my mother to heart disease. So between cancer and heart disease, which are some of the leading causes of death, I became really interested in health promotion and disease prevention. I’ve always been interested in public health, and I never thought that it would be so important as it has been these last few years during the pandemic.

Issues regarding health inequality really surfaced during the pandemic, which are things we have been talking about in the health field for years.

Did you feel your field had more of a voice during this time?

I was glad that it raised everybody’s awareness to the issue. And of course, that became magnified with other issues going on. I was most proud of my past students who went out to work in public health agencies. It’s exciting to know that what you teach and areas you work in have a real profound impact in society.

What made you transition from teaching into administration?

It’s not that I switched intentionally. What happened is that I was hired as a faculty member in a very large department that was getting too large to manage. It had a natural split, so I think that’s how it got started. Somebody just said, “She can do it, put her as the lead!”

That seems like it matches your decision to come to EWU.

There is so much potential, and Eastern has such a loyal base of alumni. At my former institution, over 80% of students were first-generation college students and 65% were Latinx. I find that many students who attend regional comprehensive schools are humble students and come from hardworking families. That drives me because I know that they just want opportunities and that they are going to work hard to achieve what they need to be successful.

And you are first-generation college student yourself.

Yes, I am. I grew up in a family-run business. My parents owned an office furniture store in Orange County, and they worked hard to provide me with that sense of opportunity. I could be anything I wanted to be, but I first needed to go to college. They saved every penny and really demonstrated to me what a good work ethic is, and I tried to follow their lead by taking advantage of the opportunity to go to school.

How do you envision giving EWU’s first-generation students those opportunities?

It’s partnering with workforce development and economic development agencies, which I have been meeting with over the last couple of weeks since I arrived. That’s where the excitement comes in. How can we partner with industry to provide internships, job placements, and practicums? To be that portal, particularly for the first-generation students can really benefit them and their families.

What challenges do you see in doing that?

It’s demonstrating the importance of a college degree or credentials or continuing education post high school.

Going through the pandemic has been challenging and difficult. Across the country, we saw enrollments decline for many reasons. So the biggest challenge is trying to get us back on board, demonstrating the importance of getting an education. An education, long term, will allow you so many opportunities, but we also know that an educated person is more likely to vote and be engaged civically. There are so many benefits with going to college. Getting people to come back to college will be my first struggle.

What do you hope to accomplish during your time at Eastern?

I’m going to be spending a lot of energy meeting people and asking them, what do you like about Eastern? How could we improve? What would make a difference for you here?

And there are big goals—like developing a strategic plan. Our current strategic plan ends in 2023, and we’ll assess what has happened under that last plan.

How do we continue being good advocates for people to get a college experience and come to Eastern? I want to continue look at sustainability issues and at diversity, equity, and inclusion issues and make sure that the things we write and support are equitably focused.

Do you intend to stay at Eastern through retirement?

Yes. This is my last stop, going out with a bang. I’m coming to Eastern and giving it my all because I’m passionate about what we have to offer and continue to do.

This Interview has been edited for length and clarity.