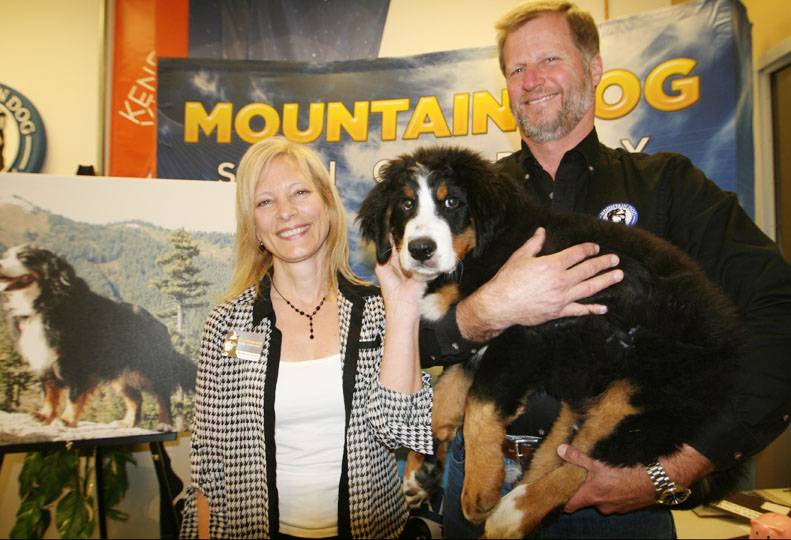 Signs, signs, everywhere a sign. Like the 1971 hit by the Five Man Electrical Band, signs are everywhere and everything for Liberty Lake-based Mountain Dog Sign Co. and wife-and-husband owners Marshon and Steve Kempf, who will celebrate five years in business this fall.

Marshon Kempf, president and CEO of Mountain Dog and a former nurse, says she and her husband Steve were looking for a business to open in the service industry after Steve retired from the U.S. Air Force with 27 years of active duty as an F-16 pilot.

“We liked the idea that we could help others grow and transform their business,” Kempf says. After some research, they decided to establish a sign company because of the simple fact that all companies need some type of signage, whether business is good or bad.

Starting the business in 2011 meant dipping into savings, as well as using personal credit cards for startup costs, Kempf says. But they wanted to start a business from the ground up and fulfill the American dream, the couple says.

While the Kempfs declined to discuss revenue numbers, they say from 2012 to 2013, revenue grew by 75 percent and last year was up by 45 percent.

The Kempfs named the company after their late family dog, a Bernese mountain dog named Ella, who also was the inspiration for the company logo.

“We’re dog people,” Marshon Kempf says. Using the family pet as part of the company’s branding sets the business apart and speaks to company values, she says, adding that they love having the dog as a mascot.

“Her name was Ella. Unfortunately, she passed on February 16. We miss her. We always brought her in to work, and people loved her,” she adds.

Their new puppy, Jack, also a Bernese mountain dog, is only 17 weeks old and already weighs in at over 40 pounds.

“He comes to work with us every day, now that he’s potty trained,” she says.

She laughs when she says a lot of the company’s clients call ahead to make sure the dog will be in the office, or request that he accompanies staff members during an install.

The company creates all types of signs, including architectural signage, window and floor graphics, wide-format digital images, and signs with laminate finishes that are available in about 700 patterns from natural to hi-tech and can be placed on wood, metal, glass and even leather.

A niche for Mountain Dog, though, is interior commercial graphics and artwork, particularly in a lobby, Kempf says, adding that first impressions are critical and statistics show that how people feel in a space impacts whether or not they choose to do business with one company versus another.

She says canvas art pieces from photographs or even a graphic version of a company’s mission statement can transform a lobby or office and make the space fit a business’s personality and branding. She says Mountain Dog works with local interior designers and architects, as well as construction companies in Spokane, Liberty Lake, Coeur d’Alene, and elsewhere in North Idaho.

It’s important to create signage that retains the company’s integrity and to maintain those design standards throughout a client’s space, she says.

“We have four designers here who are doing award-winning designs,” she says. “Many times, companies will say they’re not sure exactly what they want. We ask them what they’re trying to achieve.”

She says if a client can’t visualize what they want to see in a final design, discussions over what the client company’s mission and values are typically end in the development of appropriate signage.

She adds that everything the business does is custom and the designers’ skills come through when working on a computer in two dimensions, and then creating a three-dimensional product.

The company works with local artists, such as Spokane painter Todd Benson and Coeur d’Alene photographer Benjamin Powell. Landscape photography is one of Marshon’s passions, and her photos also are used by the business.

“We have many of my photos displayed at Meadowwood Technology Campus where we are located,” she says.

Another advantage to owning a sign company business, the Kempfs say, is having ownership over their own schedules.

“No weekends,” says Steve Kempf. “We work hard during the week but we set limits on working weekends and nights,” he says with a laugh. “We rarely have a sign emergency. Sometimes we have last-minute work, but there’s no 2 a.m. calls.”

Kempf says an important value she and her husband have incorporated into the company is giving back to the community.

“We’ve made giving back a priority since we started Mountain Dog,” she says. The Kempfs say they donate on an ongoing basis to nonprofits, schools and churches, service clubs, and companies looking for sponsors or donations.

“It’s been a priority from the beginning because we want to support the community that supports us,” she says.