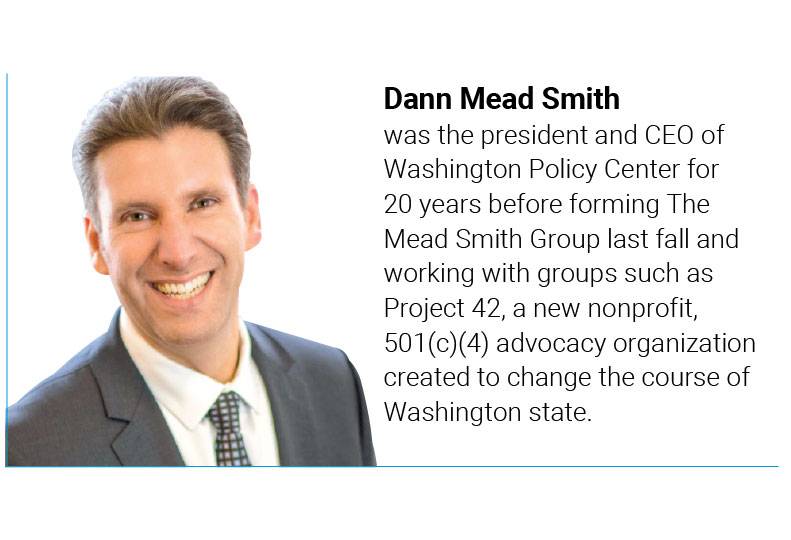 As business owners and employees at businesses in the Spokane area, you are busy balancing your work and family life while at the same time trying to keep an eye on the issues that impact you. There are so many issues coming out of local governments and, of course, at the state and federal levels that impact businesses and their ability to grow and hire more workers. It can be overwhelming.

Such issues include increasing levels of homelessness and crime in Spokane, new regulations that lead to negative comparisons with the business climate in neighboring Idaho, and the continued threats to the funding needed to finish the North Spokane Corridor.

So it is great to see three new organizations that have launched over the last few months in our state that can help you stay up to date on issues as well as offering ways for you to engage and get involved.

The Center Square, the journalism hub of the Franklin News Foundation, was launched to fulfill the need for high-quality legislative and other public policy news. The focus of its work is state and local government and economic reporting. A taxpayer sensibility distinguishes its work from other coverage of state and local issues.

The Center Square is staffed by editors and reporters with extensive professional journalism experience, including a new reporter from Eastern Washington. As a result of this approach, readers are better informed about the focus of state and local government and its cost to the citizens and businesses whose tax dollars fund governmental decisions. The medium engages readers with essential news, data, and analysis delivered with velocity, frequency, and consistency. It distributes stories through three main channels at no cost to readers: a newswire service, TheCenterSquare.com website, and social media.

The Center Square has a new Washington state bureau which includes an editor and reporting staff based in the state. It now averages 22 stories per week and produces a weekly email compiling recent articles and daily stories that are being picked up across our state by newspapers, TV, and radio.

The goal is to flood the market with daily, taxpayer-focused, straight news stories. Over 10,000 people around the state already have signed up to receive Center Square’s email newsletter.

ChangeWashington, also known as ChangeWA, is a strategic communications organization focused on advancing “common-sense governance” on taxes, public safety, homelessness, supporting small businesses and farms, government accountability, and other local and statewide issues. Its work has been credited with stopping the proposal to do away with misdemeanor crimes in Seattle by activating its list of 35,000 subscribers and flooding the council with emails and comments.

Additionally, former Seattle Police Chief Carmen Best worked with ChangeWA last year to drive the conversation on lack of police planning and the need for continued investment in public safety. ChangeWA is now going statewide to educate voters, including sending out action alerts to busy people like you, so you can quickly and easily make your views known to local and state policymakers, including during the legislative session that adjourns later this month. Sign up to receive ChangeWA’s emails and join the engaged audience that weighs in on key public policy issues at www.changewashington.org.

League of Our Own Washington is a new organization focused on recruiting and training women to run for office. League has already recruited over 85 fiscally conservative women to run for office now or in the future, 26 of whom were on the 2021 general election ballot. It also has over 50 volunteer scouts and coaches to help these prospects become great candidates and leaders.

The League hit it out of the park in its first year with 17 candidates who went through its training program winning their races last fall. Seven are new school board members, five are city council members, two are new port commissioners, and three are mayors. Most were first-time candidates, including new school board members and city councilmembers who are now serving their communities across Eastern Washington.

As the League of Our Own Washington’s executive director Katlin Vintertun said on election night, “This is what it is all about: Talented, smart, qualified women who can relate to voters and win in tough districts.”

So now you have three new ways to engage on policy issues which is encouraging as we emerge from the COVID pandemic and ahead of the key midterm elections this fall.

This is in addition to Washington Policy Center and its Eastern Washington office, which is based in Spokane. WPC is already providing analysis on issues and more importantly offering solutions from its eight research centers—agriculture, education, environment, government reform, health care, small business, transportation, and worker rights.

And I hope you will engage, as the Spokane area and our state will benefit from business leaders and workers like you getting involved and sharing your expertise.