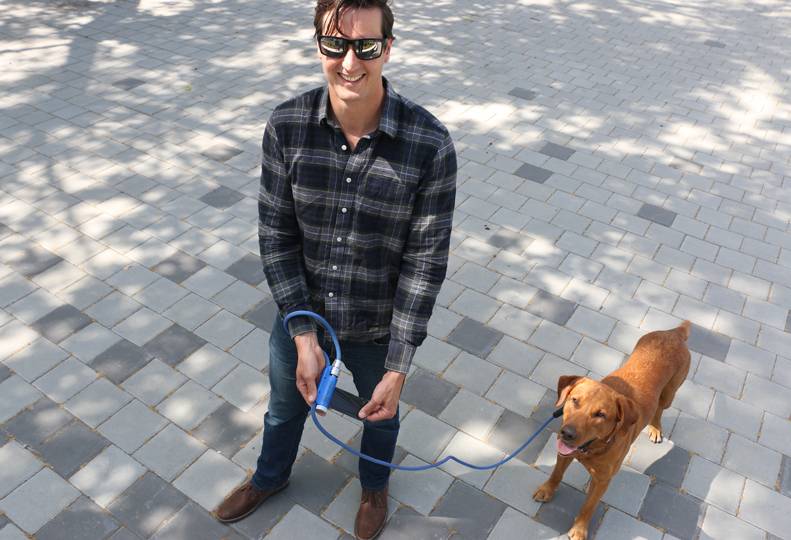 Two years ago, when he lived in Denver, running and hiking enthusiast Evan Purcell arrived home from work, threw on his workout gear, leashed his dog Bode, and the two went for an evening run.

The near inseparable pair were so eager to see each other that Purcell only realized he’d left Bode’s waste bags behind when the dog had to relieve himself on a trail in a city park. It didn’t take long for another unsuspecting runner to find Bode’s remnants, Purcell says.

Now a Spokane resident, Purcell says it wasn’t the first time he’s left Bode’s bags behind. That experience led to the birth of NOBO Pets, a business he founded that sells rugged, streamlined leashes with built-in waste bags.

Purcell partnered with Jordan Greene, Connor Schwab, and Brandt Talley to form the company, which sells leashes directly to consumers via its website.

The leash has a screw-lock carabiner that’s compatible with collars and harnesses. Leashes can be purchased for $55 at nobopets.com.

Purcell, a mechanical engineer, says it wasn’t long after the incident in Denver that he set out to make a dog leash tailored to his needs.

“After that run, I went to look online for something, and it was the same old thing, a bulky, floppy bag around your waist that’s just annoying when you’re running,” Purcell says.

So, he just sat down with his computer aided software design skills and 3D printer and began making different leash designs of his own.

“I never intended to start a business from these.”

After a few iterations he ended up creating one that he liked. Then, armed with his homemade leash, suddenly, whenever Purcell went for a run, he was inundated with inquiries from fellow dog owners asking where he acquired his leash, he says.

“‘Where’d you get that?’ It was like clockwork,” Purcell says of the constant questions he received from onlookers whenever he was out with Bode.

Last year he founded the company, then promptly launched a campaign on the Kickstarter online crowdfunding platform with a goal of raising $10,000 for initial startup costs.

Contributions to that effort led to $30,000 pouring in through the platform. Product sales began for the first time in late May, he says.

“There is a need here in the pet space for a product like this,” Purcell says.

Pacific x Pine is located in the newly renovated 13,000-square-foot building that once served as home to Pacific Fruit & Produce.

Encompassing a total of 4,500 square feet, the event space was scheduled to open Wednesday, July 1.

“I like to think of this (space) as kind of a blanket canvas,” Biondi says. “It has the ability to serve a wide variety of purposes ... elopements, graduation parties, bridal showers.”

With the cancellation of a wide range of social activities due to COVID-19, Pacific x Pine has the room to accommodate many different events while allowing organizers to meet current social distancing protocols, she says.

Event space is divided equally by square footage between the lower level and an upper-level mezzanine, she says.

Jimmy King, who owns Spokane-based JMK & Associates, purchased the building in 2019 and renovated it before moving his financial company into the building last October, he says.

King says he’s looking to bring other tenants into the building.

“There’s access to 60 parking spaces  and it sits in an up-and-coming neighborhood in the University District,” King says.

Local business owner Jonathan Chan, who co-owns and assists in the operation of Chan’s Red Dragon restaurant at 1406 W. Third, near downtown Spokane, says the operation has had success selling an assortment of protective face masks and personal protective equipment to the general public.

“This effort started out at the height of the (COVID-19) pandemic and has continued since,” he says.

The restaurant set up its own “pop-up shop” within the business selling an assortment of supplies.

Chan says the restaurant sells the KN95 masks for $2 each, individual disposable masks for 45 cents, and hand sanitizer for $25 a gallon.

Chan says PPE orders can be taken through the restaurant’s delivery business for those vulnerable customers who are deemed a greater health risk to contract the novel coronavirus.

“It doesn’t make a lot of money,” says Chan of the restaurant’s PPE selling efforts. “More than anything, it’s about helping the community.”