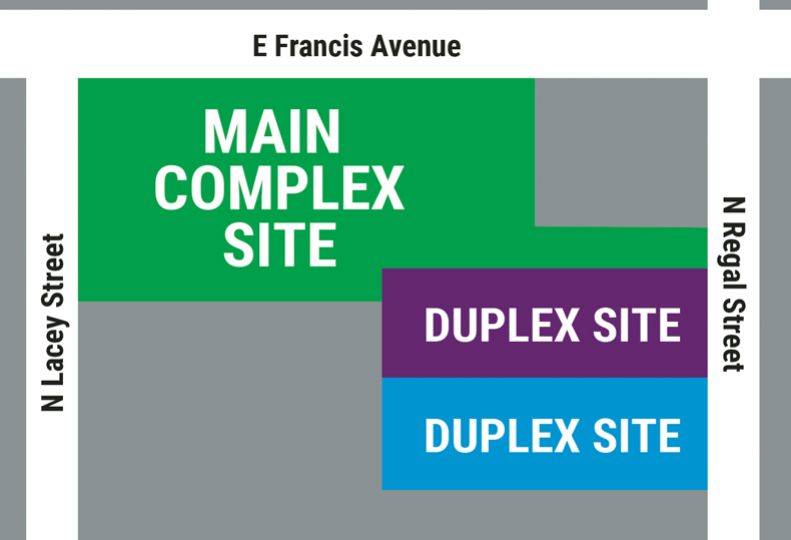 Dave Roberts, senior developer for the nonprofit, says the $10.2 million project, which consists of a 48-unit, three-story main building and five duplex buildings, will be named Jayne Auld Manor, in memory of the organization’s former executive director, Jayne Auld, who passed away in 2016.

The project site consists of three parcels of land on the south side of Francis Avenue, between Lacey and Regal streets.

Roberts says Spokane Housing Ventures acquired the 1.8-acre property at 2830 E. Francis in January 2017 and is working with Spokane-based ZBA Architecture on designs for the project.

“Thirty-eight units will be within in a three-story main complex to be built on the largest parcel bordered by Francis Avenue and Lacy Street,” he says. “The remaining 10 units will make up five duplexes, which will be built on the two parcels to the south along Regal Street.”

The main building will have about 34,580 square feet of floor space and will feature 25, two-bedroom apartments, and 13 three-bedroom apartments. The main complex will also include a 1,100-square-foot community space with a kitchen, where residents can gather and host events.

The site’s five duplex buildings will include a total of 10 three-bedroom units, each with about 1,450 square feet of space. Additional plans for the site also include a children’s play area, and a community garden.

“In recent years there hasn’t been a lot of development for working families, so we’ve designed this project specifically with them in mind,” he says.

“That’s the budget we’re hoping to stay within,” he says. “We’re moving rapidly to close the financing package for the project by the end of the year. We hope to break ground sometime in early 2019, in order to have the project complete with units ready for lease in early 2020.”

So far, Roberts says the organization has secured two grants administered by the city of Spokane, a $320,000 U.S. Housing and Urban Development grant through its Home Investment Partnerships Program and a $359,000 HUD Community Development Block Grant. The project has also secured $2.5 million from the Washington Housing Trust Fund, $8 million from the Washington State Housing Finance Commission, and qualifies for a tax incentives enabling the development to use low-income housing tax credits.

“The Jayne Auld Manor site is located in a qualified census tract, beneficial for the 130 percent basis boost we’ll obtain when applying for low-income housing tax credits but also indicative of the modest household incomes prevalent in the area,” he says. “Demographics and other factors with the northeast Spokane location led us to pursue development of a complex with two- and three-bedroom units for workforce families in the Hillyard area of Spokane.”

Roberts says the site is near resources and amenities that could benefit families, including Arlington Elementary School, and Harmon Field.

Founded in 1992, Spokane-based Spokane Housing Ventures is a nonprofit dedicated to providing safe, affordable housing to individuals and families with low incomes or special housing needs.

The organization operates 36 properties in 10 Washington counties and is headquartered at 2001 N. Division, It currently has 14 employees there.

“We’re excited with this opportunity to develop affordable housing for working families in northeast Spokane,” says Roberts. “We’re also grateful to our funding partners who exhibit confidence and faith in Spokane Housing Ventures as a steward of public resources to serve less-advantaged and vulnerable households.”