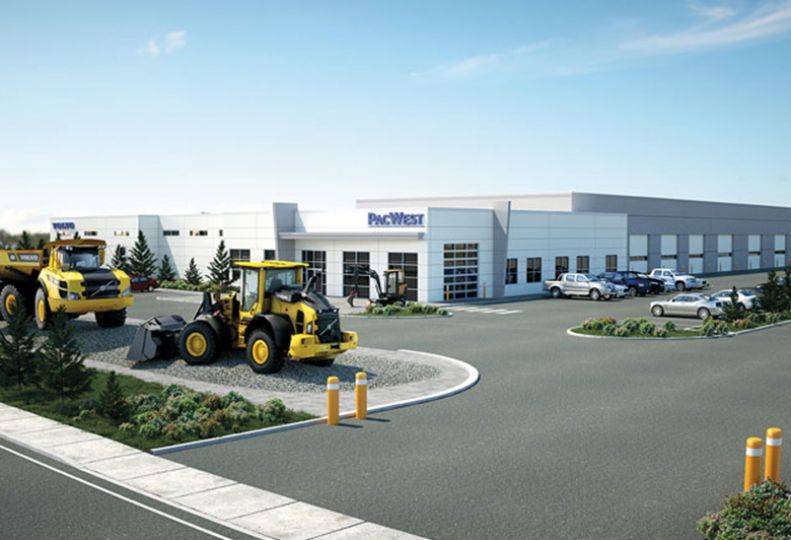 -—Architectural Ventures
PacWest Machinery will move to its new quarters in Spokane Valley, shown above, from a smaller space at 4030 E. Trent.

PacWest Machinery “has been expanding its business and has outgrown its current leased facility on East Trent,” says Wold.

A press release issued by PacWest says the project involves building a 35,000-plus-square-foot building on about 9 acres of land. A building permit issued by the city of Spokane Valley enables the construction of up to 43,900 square feet of space at a construction cost of $5 million, which would include the heavy equipment dealership and service center and handling related site improvements.

In the press release, PacWest Machinery says the larger building will “enable the company to stock more equipment, as well as host demonstrations and training.” Amenities at the new dealership include a warehouse, modern showroom, and service capabilities.

According to the Spokane County Assessor’s site, PacWest Machinery purchased the project site in March for $1.3 million.

The company supplies sales, rental, service, and aftermarket parts for Sweden-based Volvo construction equipment in Washington, Oregon, and northern Idaho, according to its website. It also offers equipment from other manufacturers, such as Iowa-based GOMACO Corp. and Texas-based TYMCO Inc.

The development is just one of the prominent projects underway in that area.

A $9 million multitenant warehouse facility at 15909 E. Marietta is in the works, the Journal reported last month.

The warehouse, under the project name SDS Valley Facility, would include 110,400 square feet of space. SDS likely refers to SDS Realty Inc., a local real estate company that has shared ownership with the project owner, S&L Sullivan LLC.

Permits indicate the project will cover three parcels totaling 7.6 acres on the northwest corner of Fire Lane and Marietta Avenue, about two blocks east of the Marietta-Sullivan Road intersection.

Along with five other parcels, the site was purchased as vacant land by the project owner for $5.5 million last November.

No construction timeline is mentioned in the building permit.