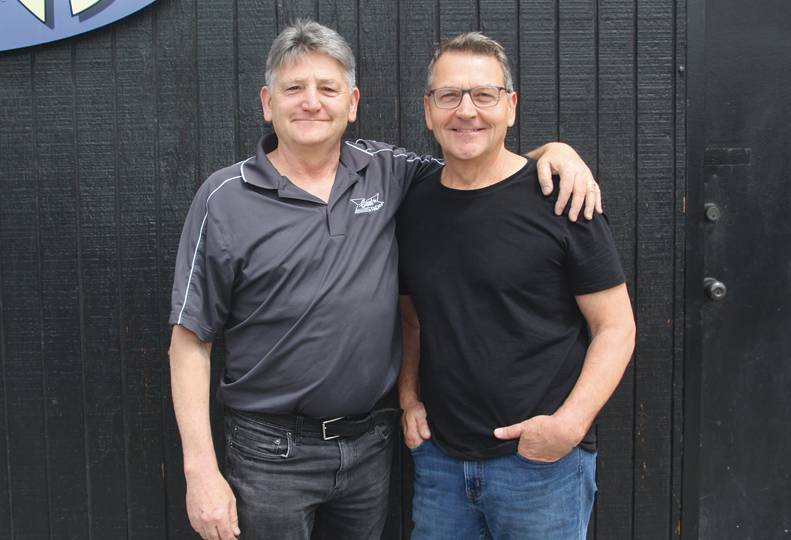 -Virginia Thomas
Tracy Cassel, left, and his brother, Sam, are retiring after more than 30 years in the sign business in Spokane. Their company, Cassel Promotions & Signs, closed earlier this month.

Cassel Promotions & Signs started with a tube of fabric spinning in the wind atop a car.

Cassel President and co-owner Tracy Cassel, now age 63, came up with a windsock in 1987 to advertise his now-defunct Spokane Valley deli delivery business. The windsock drew attention, and soon other restaurants demanded their own branded windsocks.

With his brother, Sam, now age 65, by his side as vice president and co-owner, Cassel expanded the company at 130 S. Division to include signs and banners, as well as promotional materials, ranging from coffee mugs to backpacks. Cassel-produced signs and banners have appeared in such high-visibility facilities as the McCarthey Athletic Center, at Gonzaga University, and the Spokane Convention Center.

But with many of Cassel’s key customers paralyzed by the COVID-19 pandemic—Spokane Indians’ season has been postponed indefinitely, and no Gonzaga sports fans will cheer in the stands for several more months—Cassel says he and Sam decided it was time to retire.

Cassel says most of his eight employees have found jobs at other companies and will be able to take Cassel’s customers with them. It’s important to the brothers that their employees and customers land on their feet, he says.

Masked and socially distanced, the Journal sat down with the Cassel brothers on their last day in business — June 11 — to talk about the company’s history and how COVID-19 induced the brothers to retire.

Journal: What have been some high points in the company’s history?

Tracy: We’ve had a lot. The car top advertising side of it, when we were doing Domino’s and Pizza Hut, Little Caesar’s, and Pizza Pizza, we were rocking and rolling. We were selling pizza signs like crazy. That was in the early ‘90s.

Sam: We were doing a lot of trade shows. Those trade shows were a lot of fun, because we were selling  a product that created business for franchisees.

Tracy: It’s kept our family going for 35 years. We’ve got my brother and my son, my niece and nephew. We have my other niece and my sister-in-law, and my other sister-in-law. A lot of our family has worked for us. Our current employees, some of them have been here for 15 to 20 years.

Tracy: We had a nice little ride with Evel Knievel, too, writing a book about him and getting involved in a few projects with him. He was quite the character to be around.

Sam: Tracy and I happened to meet him at the old Gabby’s in downtown, which no longer exists. He was having a beer at the bar, and we went up and introduced ourselves and told him what we did. He says, “I want to have lunch with you guys tomorrow. I’m interested in what you guys do.” We went and had lunch with him the following day and got involved with licensing from bicycle helmets to T-shirts. That led to a long working relationship as well as a friendship. We traveled to various trade shows that he would be at, signing autographs. He’d always invite us to go and help him set up. That was a lot of fun, hanging out with him, as famous as he was.

How has the industry changed over the years?

Sam: The technology. The printing hardware, software, different types of media, different types of vinyl. That has made it overall a little easier and more affordable than the way the technology was when we first got started. Every color was a price increase, depending on if it was one color, two color, three color, or four color. Now, with digital printing, it’s a one-size-fits-all. The technology has made doing the kinds of things we do much easier and faster. Where it goes from here, who knows?

What are the greatest challenges that Cassel has faced?

Tracy: The financial challenges—whether you’re going to make money, break even, or lose money. When you’re doing so many different projects and trying to keep your eye on the ball, it really becomes a challenge. We always say that if it’s not perfect, it’s wrong. If there was anything that wasn’t perfect, it was wrong.

Sam: We all experienced the same thing when the lockdown was ordered. Everybody had to go home and not come down to work for the safety of all of this.

Tracy: We still had orders. People wanted social distancing decals or sneeze guards and stuff like that. We thought, well shoot, we can come down here and print. We had a cleaning station. Everybody had masks on. We couldn’t do everything virtually from home. We had to produce things.

Sam: We kind of deemed ourselves an essential business when we were getting calls from the hospitals that needed barricade-type signage to route people and needed social distancing decals. When we got Paycheck Protection Program money, we all came back down to work and started printing and providing those types of products in preparation for when a lot of businesses were going to be able to open up. That gave us a little bit of fuel, from a revenue standpoint, for the last couple of months, but it was somewhat of a Band-Aid.

Tracy: There are always things, but at this point in time, I’m looking forward and not trying to look back and do the regret thing. If I start looking back, boy oh boy, there’s lots of things that we could have done differently. But I don’t want to think about them now.

Our employees have really made us shine and look good. We might be the face, but they just really knew how to take a customer from the first phone call right to when they got the product, to the follow-up. Our suppliers, our customers, and our employees — we’re feeling it now. Every phone call is someone saying they’re so sad or a vendor is giving some (debt) forgiveness because of us going out of business. That means a lot. We touched a lot of people here in Spokane. They’ve been saying, “We’re going to miss you,” and that makes us feel really good. We’re going out respectably.

Do you have advice for somebody looking to start their own similar company?

Sam: You better have a passion, first of all. I would advise against getting into a business like ours just because you feel there’s a market out there. You do your homework, you do your research, you see what the competition is doing out there. Be prepared to surround yourself with good people, and like what you’re doing. Make sure that it’s something you want to get up in the morning and go do.

Any other parting words of wisdom?

Tracy: Dennis Patchin and Matt Santangelo were in today, and they said, “You guys put a mark on Spokane.” That sends chills down me. We’re thankful for Spokane supporting us for all of these years.

Sam: We’ll take the summer off. I’ve got a little work to do around the house. I can’t remember ever having a summer off. Thinking about retirement seemed so far off in the future. Even at our age, we probably could have worked until we were 70. We grew up in Hillyard. We were Rogers High School grads, so we always felt we were kind of survivors and had to work hard for a living, nothing was given to us. So, I’m going to kick back and relax.