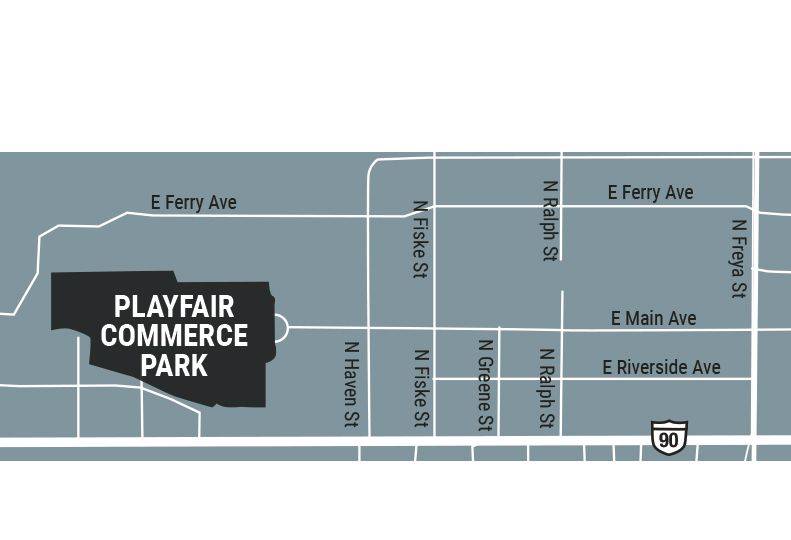 Czapla declined to disclose construction costs. Based on city records for similar-sized Playfair projects, the total value of the four buildings is likely to exceed $15 million.

Playfair Commerce Park is located east of Haven Street in between Ferry and Sprague avenues.

The construction comes at a time when the vacancy rate for industrial space in Spokane County is at a low of 1.97 percent, according to a February survey conducted by Valbridge Property Advisors|Auble, Jolicoeur & Gentry Inc. That's down from a recession-era high of 10.9 percent vacancy in October 2011.

At Playfair, Czapla says construction is already underway on one of the new buildings, which will occupy 75,000 square feet and is expected to be completed in January.

According to city records, that project has a construction value of $3.9 million and will be located at 2720 E. Ferry. Divcon Inc., of Spokane Valley, is the contractor on the project.

Czapla says two other buildings will have 105,000 and 54,000 square feet, respectively, and construction is expected to be completed on both next August.

As of last week, those projects hadn't gone out to bid, and Czapla declines to disclose estimated project costs.

However, the combined construction value of those two projects could approach $10 million based on building permit valuations for the already underway 75,000-square-foot building and earlier Playfair Commerce Park projects, such as the recent $4.2 million, 60,000-square-foot Playfair 9 project, and the $5.7 million, 113,000-square-foot manufacturing building constructed there in 2013.

Spokane-area construction is typically build-to-suit, but Playfair Commerce Park has been an exception, Czapla claims.

"We're building the shell in hope that we can obtain tenants," he says.

Some tenants of the park include Airefco Inc., AMI Metals Inc., Cascadia Metals Inc., and Scafco Corp., he says.

Just over two miles directly east of Playfair Commerce Park, on L.B. Stone Properties-owned land at the northeast corner of Sprague Avenue and Fancher Road, a 100,000-square-foot industrial building is being planned that likely will have a multimillion-dollar construction value, bringing the total current and planned construction value to over $15 million.

No contractor has been selected for that project yet, Czapla says, adding the developer hopes to begin construction early next spring.

The land for that project previously was used as a storage yard by Scafco Corp., a Spokane-based steel framing product supplier. Scafco is owned by Lawrence Stone, who also owns L.B. Stone Properties, and is headquartered in Playfair Commerce Park, at 2800 E. Main, the park's main address. L.B. Stone Properties also operates at that address.

Since Playfair Commerce Park was established in 2014, it has secured and retained 11 tenants, says Czapla.

Copper State moved to the park in March, he says. Located at 290 N. Altamont, the company occupies 15,000 square feet and has 12 full-time employees here.

The company is turning the Spokane operation into a regional distribution center, but customers still can stop in and purchase supplies.

Czapla says the new construction in Playfair follows the development of two other warehouse buildings, Playfair 9 and Playfair 10. Divcon Inc. is also the contractor on those buildings.

Kim Crumpacker, assistant to the COO at L.B. Stone, says Playfair 10 is complete, but Playfair 9 is still under construction.

As previously reported by the Journal, Playfair 10 has 75,000 square feet.

Czapla says Spokane-based Stoneway Electric Supply Co. has leased all of Playfair 9, and Playfair 10 has a single tenant signed to lease 10,000 square feet.

Crumpacker says Playfair Commerce Park will have nine buildings, once construction of Playfair 9 and the three new buildings is completed.