Company could start work this fall on $20M project 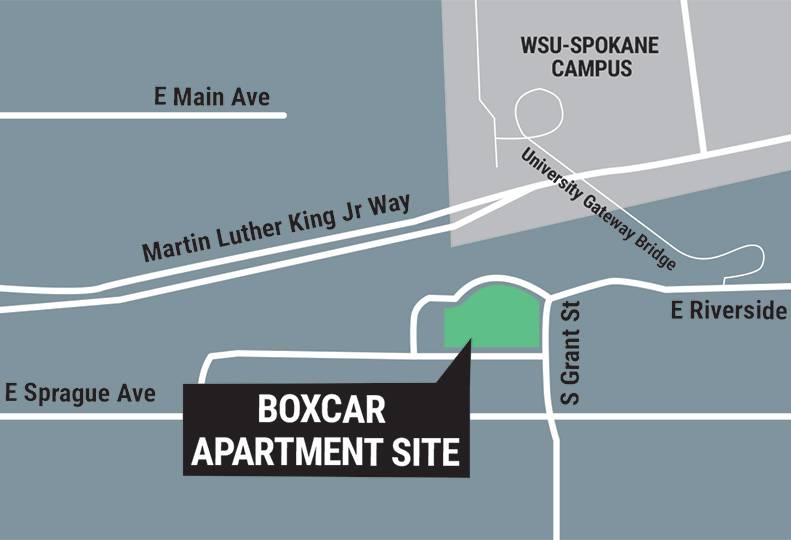 A Portland-based development company could break ground on its planned $20 million Boxcar Apartments in the University District as early as October, says managing partner Tom Cody.

The company, Project PDX, which does business as Projectˆ, plans to file for building permits within the first two weeks of August, Cody adds. While hopeful for an autumn construction start, he says weather conditions could delay breaking ground until spring 2021. Once construction begins, the project should take 15 months to complete.

Plans show the project will involve construction of a seven-story apartment building with ground-level amenities and a two-story covered parking structure.

The 77,500-square-foot structure is expected to have at least 136 living units, which will consist of a mix of studio, one-bedroom, and two-bedroom apartments. The apartments will be geared toward professionals, those in the medical industry, and students at the University of Washington School of Medicine-Gonzaga University Health Partnership programs, Washington State University’s Spokane campus programs, and Eastern Washington University students here, Cody says.

Amenities on the ground floor will include a 1,200-square-foot café and retail space, as well as a package concierge office, a fitness room, and bike room with 76 bike spaces, site plans show.

In total, the building is expected to host 150 residents and employees.

The decision to develop in Spokane was driven by a confluence of factors, Cody says.

“Secondary markets are increasingly attractive, (because of) the livability, affordability, high quality of life amplified by access to the outdoors, a robust job market, and the pillars of health and education,” he says. “And, in the grand scheme, it’s a pretty affordable option compared to bigger cities like Seattle or Portland.”

“It’s important … for our community, both to address housing needs but also to help the market to realize that yes this is a desirable place for people to live, work, and play,” contends Gilberts. “We need to help some of those first projects so there’s more in the future.”

Currently, there are about 250 subsidized housing units by the tracks, Gilberts adds.

“You have the energy of education, you have innovation and industry there, but no housing,” he says. “We feel like this is going to be the last ingredient in alchemy that provides a vibrant district.”

Gilberts contends the project will help expand the variety of housing options in the community.

“It’s going to be useful for our entire community to be able to highlight how a sustainable, vibrant community has opportunities for all types of people,” he says. “We don’t just make housing for one group of people.”

The district has set aside upwards of $300,000 for reimbursement for public space improvements to be completed by the developer, Gilberts says.

“Some of that will be some street work, some curb work, and some utilities, but also they’re going to have some public spaces available,” he says.

The funds will come from the University District Revitalization Area funds, which are allocated to improvement projects in the public rights of way or that are publicly accessible that support the development of projects in the district.

The proposed project will be built on one of the few remaining unpaved roads in the University District, Gilberts adds, so these funds will be used to help complete that ongoing project.

“We really like the idea that a lot of the growth in Spokane has been suburban,” he says, meaning such growth has left behind unrealized opportunities to develop new urban projects.

“We like the idea of helping to build Spokane up versus out,” Cody says. “In-fill developments in locations like that that are connected to jobs and transportation linkages are increasingly attractive to people.”