$25M development to open next year, employing up to 125 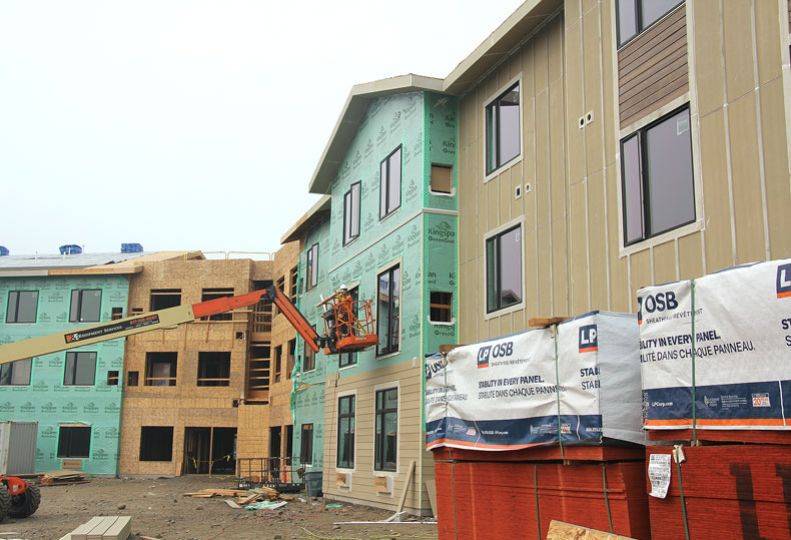 -—Erica Bullock
The Gallery at Spokane, which is being built at 5415 S. Regal in the Moran Prairie neighborhood, is expected to open next August.

Construction is under way on a $25 million-plus development dubbed the Gallery at Spokane, which will bring additional senior housing to Spokane’s South Hill, says Joe Huskinson, director of operations for Stellar Senior Living LLC, one of the developers.

The 121,400-square-foot senior community will provide a mix of 107 independent-living and assisted-living units and 30 memory care units on a 5-acre site, he adds.

“When the time comes, we can provide the care they need, right in their rooms,” Huskinson says. “We don’t designate a certain area that’s independent or assisted.”

Apartments at the Gallery will be made up of studios and one-bedroom and two-bedroom units, says Becky Monday, executive director of the Gallery.

Rental rates will range between $4,100 to $5,600 per month, depending on the size of the apartment, Monday says. She contends that the pricing is aligned with the current market here.

Huskinson compares amenities planned at the Gallery at Spokane to a floating hotel.

“Ten years ago, facilities were like nursing homes,” says Huskinson. “Now, they’re like a cruise ship on land.”

The dining options and the extensive activities program with excursions and social engagement opportunities all contribute to the cruise ship-like amenities for residents, Huskinson says.

Construction began about eight months ago, and the facility is expected to open next August, says Huskinson.

The construction value initially was estimated at $25 million, although Huskinson says he anticipates the final cost will be significantly higher due to current market conditions.

Spokane-based Walker Construction Inc. is the contractor on the project, and Denver-based OZ Architecture Inc., designed it.

Huskinson adds that the Gallery at Spokane will be one of Stellar Senior Living’s largest communities. It also will have the most parking, at about 100 spaces.

Up to 125 employees will work at the Gallery. Huskinson says, “We’ll have a registered nurse. Nursing will be our largest department, that usually houses about 50% of the employees in the health and wellness department.”

The dining team will make up about 30% of the staff. “We’ll have an executive chef, pastry chef, and a sous chef on-site that will run the restaurant,” he says. “The housekeeping team will manage and maintain the community and will take up 10%. The administrative team will also run about 10%.”

Monday says apartments will be pet friendly, and each will have a kitchen and a washer and dryer.

Common areas will include indoor and outdoor dining rooms, a bistro, a beauty shop, and a crafts, media, and activity room, Monday explains.

Huskinson adds that the Gallery’s bistro and café area will be operated by a local agency that works with individuals with disabilities.

He says the Gallery’s residents and their families will be the primary customers at the bistro, but it will be open to the public also.

“We’ll fund it, and it’ll be an opportunity for (the agency’s employees) to come into work, and it will give these individuals an opportunity to participate in the community, and the seniors absolutely love supporting them,” Huskinson says.

The agency selection process is underway, he adds.

Three outdoor courtyards also are envisioned at the property, with one dedicated to memory care that has a design element featuring a never-ending, paved, figure-eight pathway.

Huskinson says the design will benefit residents who struggle when coming to the end of a path.

Monday says, “One thing that stands out to me is how the gardens, courtyards, and outdoor spaces for our residents look well laid-out to give opportunities to walk in the community safely.”

Demand for the Gallery’s apartments is gaining momentum, and the company is receiving five to six new inquiries a day, Huskinson says.

“It’s obvious there’s a lot of competition around, but I think with this being one of the newest communities, it’s a lot more innovative,” he says.

Huskinson adds, “Becky’s first day was Aug. 22, and she’s actually worked for us before. About nine years ago she ran a community as an executive director in Coeur d’Alene.”

Monday says she has worked 20 years in the senior housing industry and has gained experience that enables her to provide input on the development of programs, food service, and staff recruitment for the Gallery.

She wants to support staff and help the company grow its culture of care.

“When you go into this industry, you have to start with heart. I’m excited to watch our staff grow,” she says. “I know that when I take care of my staff, they’ll take care of the residents, and it works out very well.”

Huskinson says Stellar Senior Living’s goal is to grow the company’s operations to 50 communities within the next 10 years.

“Fifty communities is kind of the sweet spot, because we don’t want to grow into the largest assisted-living or senior-living organization in the U.S.,” he says. “There’s a personal touch we believe we have … and we don’t want to give that up.”

Stellar Senior Living operates 27 communities in seven Western states and has three communities under construction, two of which are being developed in partnership with Experience Senior Living.

A representative of Experience Senior Living couldn’t immediately be reached for comment.

“What we bring to the community is very valuable. Not only is it a safe environment for residents, but it’s a desirable place to be,” Huskinson says.