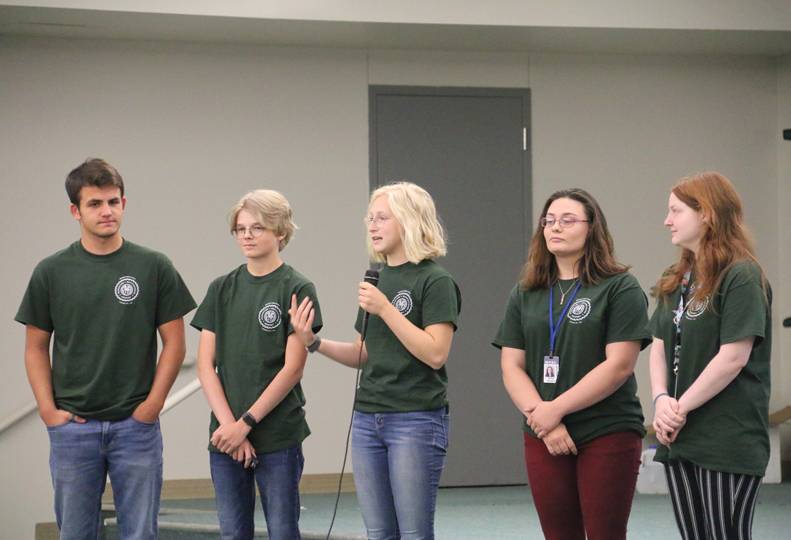 The academy, which started in July, is an intensive training program for students across Spokane and Kootenai counties to gain first-hand experience in the manufacturing and production industries. The academy was established through a collaboration by Spokane-based aluminum castings equipment manufacturer Wagstaff Inc., Greater Spokane Incorporated, East Valley School District, and the Spokane Workforce Council.

The academy had been over a year in the making, says Wade Larson, chief human resources officer at Wagstaff, who spoke during an academy “graduation” ceremony on Aug. 2.

Students from about a dozen schools in Spokane and Kootenai counties attended four, 40-hour weeks.

The challenge posed to the students was to design, prototype, manufacture, market, and sell their products during that period, Larson says.

Students were split into four teams of five and assigned a team mentor, and each group was assigned a different product: cutting boards, birdhouses, corn hole games, and wooden boomboxes, which are small wooden boxes into which one can insert a smartphone to amplify sound.

Ultimately, the teams built 25 cornhole games, 40 boomboxes, 55 birdhouses, and 64 cutting boards. At the time of graduation, the teams had sold all but 10 birdhouses, and the students had raised $4,600. All proceeds went to East Valley High School, says Larson.

Lance Beck, president and CEO at the Greater Spokane Valley Chamber of Commerce, says he was amazed at the amount of collaboration between so many local manufacturing companies, which are traditionally competitors, coming together to offer this program to students.

“There’s a shift in the paradigm of how we educate,” he says.

The manufacturers came together in hopes of drumming up interest in the trades among a younger generation, in an era when skilled labor in the production industry is sparse. The effort coincides with a current statewide initiative to boost secondary career and technical education programs in the hopes of garnering high school student interest in such careers.

A Washington state Auditor’s Office report states there’s a shortage of more than 3,200 employees in production and skilled trades statewide, which accounts for nearly one-third of the state’s skilled labor gap.

Each student left with a $2,000 stipend, a certificate, and a career and technical education credit, Larson says, and two seniors - Jackson Pratt and Dana Komberec - earned $4,500 scholarships that will pay for their first year at Community Colleges of Spokane programs geared toward production and manufacturing careers, which were awarded by the Spokane Valley Chamber of Commerce at the graduation ceremony.

Olivia Perkins was awarded the $5,300 Industry Scholarship. The scholarship was funded by Altek Inc., Kaiser Aluminum, and Wagstaff.

The teams each gave presentations to a crowd of more than 100 in attendance at the graduation ceremony at East Valley High School, which included family, friends, and representatives from Gov. Jay Inslee’s office, Rep. Cathy McMorris’s office, academy sponsors, city chambers, and the school districts.

Students praised the program, and spoke of their favorite experiences, which ranged from learning to weld to being taught how to use CAD design programs and laser scanning software.

Several students also noted their surprise at the high number of open manufacturing jobs there currently are in the Spokane area.

Pratt, a student at East Valley High School, said, “Every single interest I have… there’s a job for that in the trade world.” He added that he is excited about the number of programs available for aspiring tradesmen at the community colleges.

“The trade world is really dry,” in terms of the number of employees entering the industry right now, he notes.

Larson said the biggest challenge for organizers was trying to stay ahead of the students. That was accomplished by constantly raising the production quota on students, much like the ever-changing production quotas in day-to-day business.

“Because when does that ever happen?” he says, eliciting a chuckle from the crowd.

Students were also given a pre-sale challenge, which he says they excelled at, having sold nearly $1,600 worth of products within two hours.

During the last day of the academy, students were allowed to job shadow an expert in a field they were interested in.

Brennen Lilya, a student at East Valley High School, says he can’t put a dollar amount on the experience he gained through the program or the connections built with not only other students, but area CEOs and industry professionals.

Wagstaff spokeswoman Turina McClelland says the Production and Manufacturing Academy is planning a similar program in 2020, though she’s unsure at this time what Wagstaff’s level of involvement will be.

Applications for next year’s program are expected to be available in spring 2020.