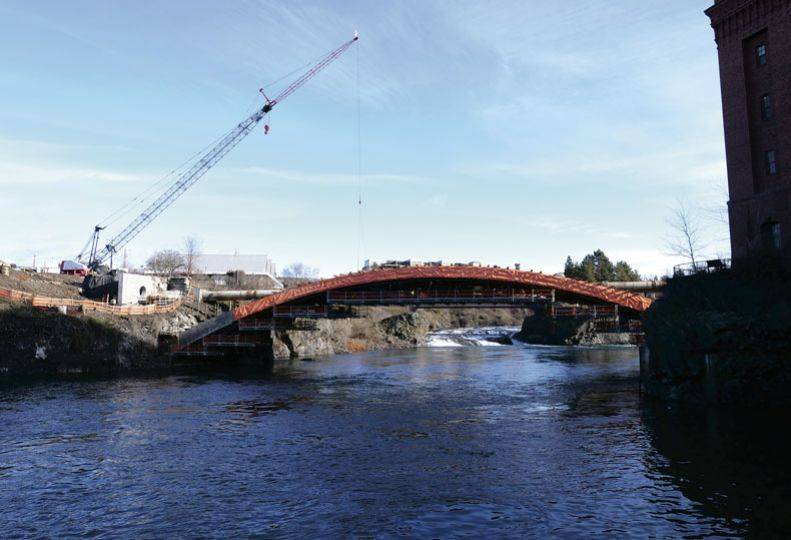 -—File
The Post Street Bridge replacement project, shown as it appeared last spring, is one of about $110 million in public projects underway in the city.

Stewart says diesel fuel costs remain high, and nothing is indicating a change in the new year. Asphalt and cement products, however, have leveled off after a major shortage over the summer.

Stewart says commercial construction next year will be bolstered by funding provided in the Infrastructure Investment and Jobs Act, which was signed into law in November 2021 by President Joe Biden and authorizes $1.2 trillion in infrastructure spending nationwide, according to a report from the Washington state Department of Commerce.

In Spokane this year, new and ongoing public works projects have totaled about $110 million, says Marlene Feist, public works director for the city.

Twenty-four new public works construction projects are scheduled in 2023 and are valued at over $66 million in Spokane.

Ongoing projects include the continuing construction of the $18.5 million Post Street Bridge replacement, says Feist, adding that completing the Post Street Bridge and reconnecting the North Bank to downtown Spokane, “is one of the biggest things we hope to accomplish in 2023.”

Additional ongoing construction projects include the Thor-Freya reconstruction project which will move to the intersections of the couplet with Second and Third avenues, valued at $1.5 million, and the $17 million Cochran Basin stormwater project.

“We’re going to continue work on the Cochran Basin, which is our largest stormwater basin, and most notably (includes) the redo of T.J. Meenach from the bridge to Northwest Boulevard,” Feist explains.

“We’re using the filtration ponds there to manage the stormwater that will then be water features in the disc golf course,” she says. “It’s our strategy around getting multiple benefits when we need to do work.”

A significant amount of grind and overlay construction is scheduled next year in addition to improvements around the city that are focused on pedestrian safety, Feist adds.

On the residential side, construction demand also has been strong all year, although the market is softening as the year ends due to high home prices and interest rates, says Joel White, executive officer of Spokane Home Builders Association.

There were 3,594 total units for all residential types permitted in Spokane County between January and September—10% more compared to the year-earlier period total of 3,257.