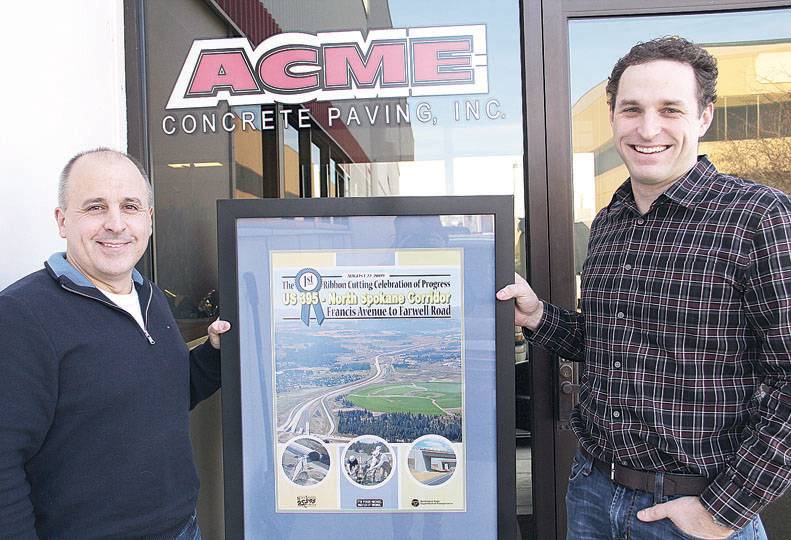 -—Katie Ross
Acme Concrete Paving Inc. President Robert Seghetti and project manager Bryan White are hoping to secure a bid for the paving of the next phase of the North Spokane Corridor.

The company also has been awarded the American Concrete Paving Association’s gold award for concrete overlays it did in city of Williston, N.D.  The award recognizes Acme’s work on seven intersections and about nine miles of highway paving.

Recent growth related to work in North Dakota’s Bakken oil fields and the upswing in employment there, along with building and maintaining the infrastructure needed to support the area, has led to a surge of projects there.

Acme, which averages in the mid-$50 million range for annual revenues, has seen a large surge in work in North Dakota in the last two to three years. This work, company President Robert Seghetti says, has helped to keep Acme busy while the volume of Washington state Department of Transportation projects has declined.

“That work has allowed us to maintain,” Seghetti says.

Seghetti says that in recent years, the Washington state Department of Transportation has drastically reduced the amount of funds available for paving projects, cuts that are detrimental to a company like Acme.

Data compiled by the Portland Cement Association on total state paving spending in Idaho, Montana, Oregon, and Washington show that state funding for materials for pavement projects in Washington declined from a high of $113 million in 2010 to only $38 million last year through the third quarter.

Acme is owned by Seghetti, Tim Welsh, and Steve Clark. Its employment numbers fluctuate seasonally, Seghetti says, as the company does most of its work in the summer months. During that time, it might employ up to 120 people, with  its workforce dropping to around 25 in the winter.

The company has three areas of operation, Seghetti says. One is concrete paving for highways and interstates, another is paving for intersections and city streets; and the third involves repairing existing concrete roadways. Concrete paving, Seghetti and White say, has a longer life than asphalt and a lower initial cost Seghetti claims

Acme was formed in late 2001 when current CEO Tim Welsh, who also is CEO of Spokane-based Garco Construction Inc., bought the paving assets of the former Acme Materials & Construction Co., also of Spokane. Welsh purchased the assets from CPM Development Corp, which had acquired Acme Materials, a longtime Spokane-area concrete and asphalt supplier, in 2000.  Seghetti had been managing Acme Materials for nine years, and he then joined Acme Concrete Paving.

Since its inception, Seghetti says, the company has paved more than 50 intersections in the Spokane area.

That $19 million project involved the demolition of part of the existing runway, raising the runway by five feet, and repaving it to improve the pilot’s line of sight during landings. In 2010, Acme also completed a $30 million runway expansion project, White says.

Now, Seghetti says, the company has to follow the funding. Since its inception, Acme has handled projects in Washington, Oregon, Idaho, Utah, Montana, Alaska, California, Texas, Oklahoma, Michigan, and Kentucky. When taking on a remote project, Seghetti says, Acme sends a core crew and then hires local workers as well, when they can be found.

“If we don’t hire, it’s not for anything but a lack of people to hire,” Seghetti says. Particularly in the North Dakota market, Acme has trouble finding qualified workers, he says.

Acme is planning to bid for an upcoming project to repave Broadway Avenue at the Argonne Road and Mullan Road intersections, White says. It also expects to bid on upcoming work on the North Spokane Corridor, as additional funding for that partially completed project is secured. The entire corridor is being paved in concrete.

In Williston, N.D., the company is  working on a $27 million new road construction that will reroute heavy truck traffic around the city, instead of through it. The North Dakota DOT project, known as the Williston Truck Reliever, ironically will require an intersection paved by Acme in 2012 to be torn up, Seghetti says.

Acme is also hoping to take on a project for runway reconstruction at the Las Vegas airport, Seghetti says.