Project to take year to complete 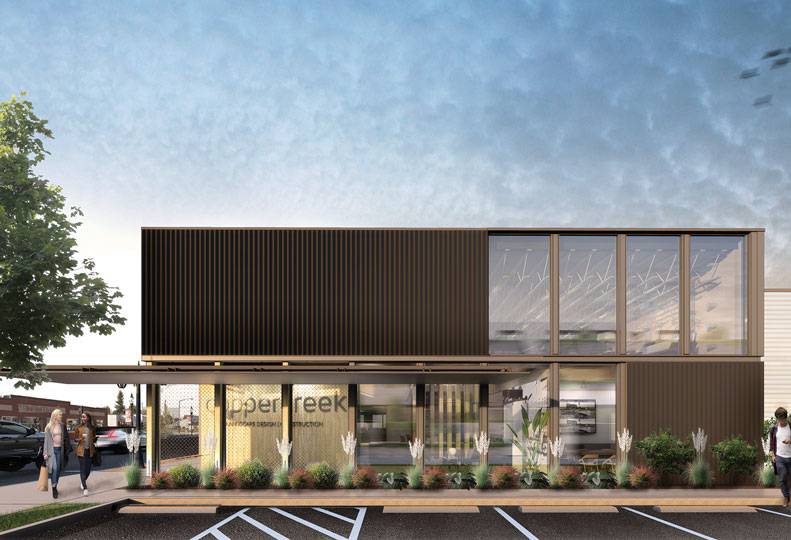 The owner of a Spokane-based landscaping company located in the Hillyard neighborhood has his sights set on expanding his current office and constructing a new 18,000-square-foot light-industrial incubator starting the middle of the year.

Matt Barton, owner and founder of Copper Creek Landscaping Co., declines to disclose the project value as he and project architect Evan Verduin, of Spokane-based Trek Architecture, are still working through the budgeting.

Tentative designs call for a series of 14-foot-high doors and working space on a mezzanine level, Barton says.

A general contractor hasn’t been selected yet, and Barton says construction could be an in-house effort. He expects construction to take at least a year.

Barton founded Copper Creek, located at 5616 N. Market, in 2003, the year after he completed his undergraduate degree in landscape architecture from Washington State University.

“Our office staff and construction have been bursting at the seams for a while now,” Barton says of limited office space. “We’ve been at a point now where it became clear we had to do something.”

Though he declines to offer exact revenue figures, Barton says Copper has seen revenue increase between 3% and 4% annually over the last three years.

“Our project count has increased probably close to 5% to 10%; just more complicated and bigger projects,” he says.

The decision by brothers Mark and Tom Holz to sell the property immediately south of Copper Creek to Barton made the proposed company expansion and construction of the incubator possible, Barton says.

The brothers operated Holz Fuel Co. on the property, he says.

Barton says he was prepared to leave the neighborhood and search elsewhere for a site if that transaction hadn’t occurred. Copper Creek has been at its current location since 2012, and Barton says he didn’t want to move.

“The city of Spokane has put a lot of investment through the years into the Hillyard neighborhood, and with the coming of the North (Spokane) Corridor, it feels like the neighborhood is on the verge of experiencing a new wave of growth,” he says.

Barton says those parcels will serve as the home to the light industrial incubator space. He envisions a scenario in which he’ll lease space to at least five tenants.

Barton says he and Verduin have envisioned a contemporary building design in which two of the incubator spaces would be oriented westward to face northbound vehicle traffic on Market Street.

The three remaining incubator spaces would be located at the building’s east end. Outdoor storage space also could be made available to tenants.

Barton says his goal is to generate more revenue without Copper Creek Landscaping getting too big.

“The business has grown to a comfortable size,” Barton says of Copper Creek.

“That was just too big for what I’m comfortable with,” he says.