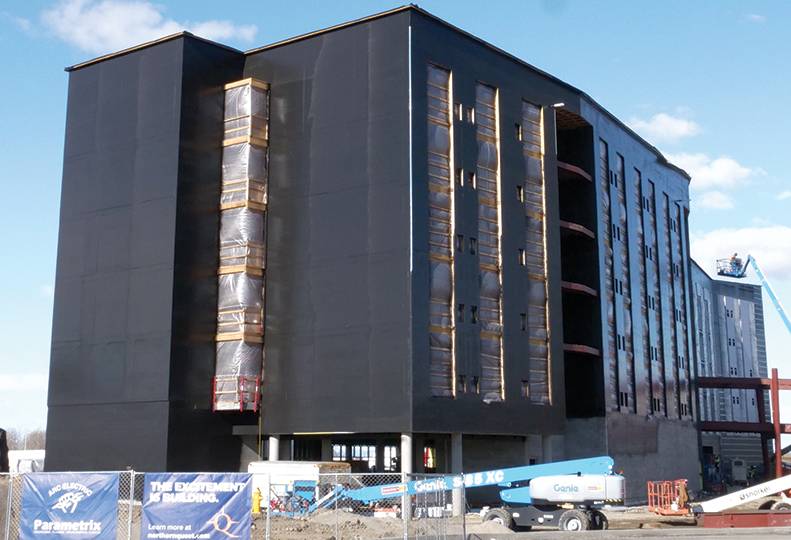 The Kalispel Tribe of Indians has three major developments both in progress and on the books this year in Airway Heights, representatives of the tribe say.

At Northern Quest Casino, at 100 N. Hayford Road, the tribe is continuing work on its five-building, 30,000-square-foot hotel expansion and constructing three dining venues, in addition to preparing to launch a mobile sports betting app for its recently opened Turf Club sportsbook.

The hotel expansion is anticipated to be completed in spring 2023, says A.J. Prudente, director of construction operations at Kalispel Development.

Representatives of Northern Quest decline to disclose the cost of the hotel expansion.

Kalispel Tribe is working with a team of construction companies, including Lydig Construction Inc., of Spokane Valley, as the builder; Integrus Architecture PS, of Spokane, as the architect; and The Society, a Portland-based interior design company. Spokane-based MW Consulting Engineers Inc. is providing mechanical, electrical, and plumbing engineering services. The Spokane offices of Coffman Engineers Inc. and Parametrix Inc. are providing site engineering services.

Once complete, the hotel expansion will add 192 guest rooms, bringing the total rooms at the resort to 442.

In another development, on 243 acres situated adjacent to and just north of the resort, Tim Nydegger, executive director of corporate strategy for Kalispel Tribe Economic Authority, says the tribe finalized the purchase of the Spokane County Raceway Park, in October. According to tax documents on file with the Washington state Department of Revenue, the Kalispel Tribe purchased the property for $5.35 million.

“We’re finalizing our plan to restart activities at the property for this calendar year,” Nydegger says. “We’re also looking at future development into the property for an overall master plan.”

Julie Holland, director of public relations and communications for Kalispel Tribal Economic Authority, says the racing community has shown interest in and support of the future development of the raceway.

Brandon Haugen, executive director of real estate development for Kalispel Development, says “Northern Quest is an entertainment destination. The one thing that’s great about the racetrack is it’s a contiguous property, and racing is a sports entertainment business, and we know the two properties go well and cohesively.”

Construction continues at the site of Kalispel Tribe’s third development, a 70,000-square-foot hardware store, located north of the Kalispel Market and Chevron fuel station at the northwest corner of U.S. 2 and Hayford Road.

Aman Sood, owner of Builders Supply Inc., has partnered with the Kalispel Tribe to lease the land and received financial support from Tacoma-based Columbia Bank to finance the construction of an 8.5-acre hardware store and drive-thru lumber yard, Haugen says.

Kalispel Tribe representatives decline to disclose the construction value of the development.

Haugen adds the hardware store will be part of the tribe’s envisioned commercial retail development on over 40 acres of land south of Northern Quest, in the future.