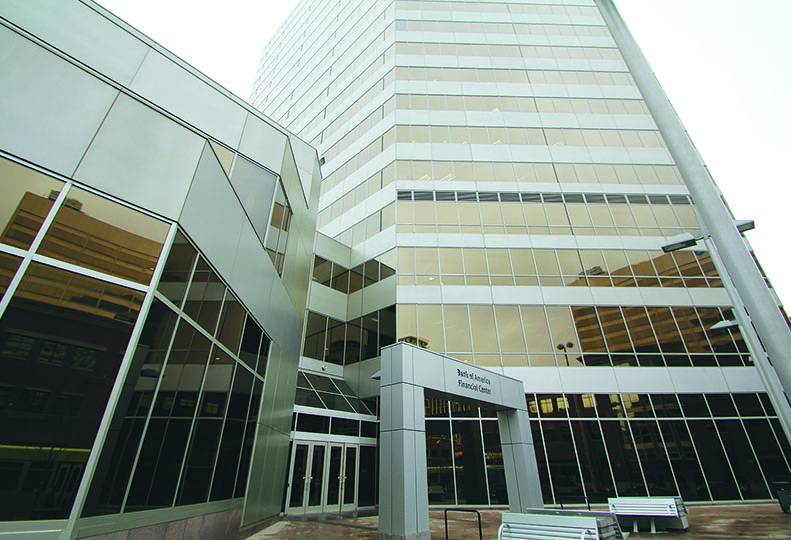 -—Mike McLean
The Bank of America Financial Center, pictured here, is one of a number for which Kiemle & Hagood Co. is the listing agent. 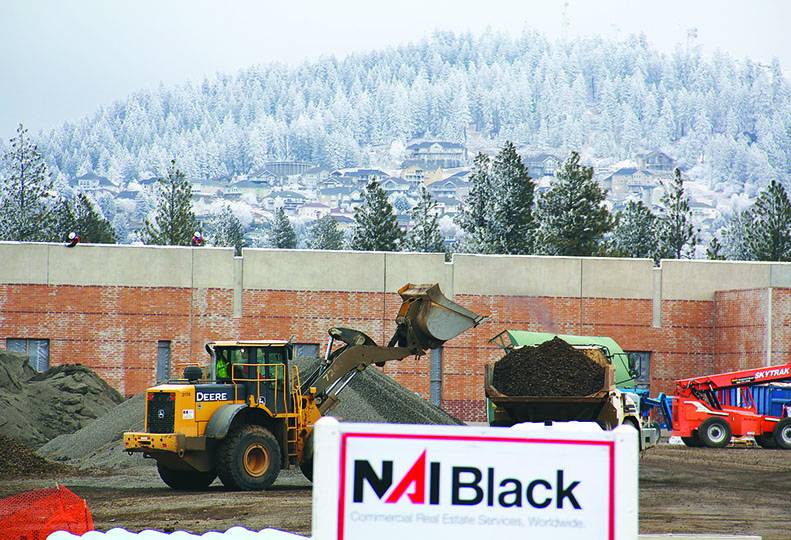 -—Mike McLean
NAI Black CEO Dave Black expects to see growth on the brokerage side of the business this year, buoyed in part by activity at the Regal Plaza shopping center under development on the South Hill.

Dave Black, CEO of the NAI Black commercial real estate brokerage here and head of a number of other real estate management, investment, and development concerns, says his companies collectively had record revenues and profits in 2013.

Black says combined profits for his commercial brokerage, property management, and development ventures were 10 percent higher than in 2012, which was a record year up to that time.

Soehren says Kiemle & Hagood’s profits in 2013 were 13 percent higher than in 2007, which still holds the high-water mark for Kiemle & Hagood in terms of gross revenue.

Revenue that year, the peak before the Great Recession took its toll on all sectors of the real estate market, was driven somewhat by two large downtown real estate transactions—the sale of the 20-story Bank of America Financial Center, at 601 W. Riverside, and the 16-story U.S. Bank Building, at 422 W. Riverside, Soehren says.

Kiemle & Hagood represented both the buyers and sellers in the two transactions, which totaled $36 million and $17.6 million, respectively.

“We tightened things during the downturn,” he says. “What carried us through is we were lucky to have a big stable of experienced people in the brokerage department. It wasn’t their first recession, but it was the worst. They knew the phone wasn’t going to ring, so they had to go out and beat the bushes to find deals, and I think they were pretty successful.”

Kiemle & Hagood didn’t have to lay anyone off during the downturn, Soehren says, adding, “We even hired a few property managers.”

The property-management side of the business continued to grow during the recession, as the company focused on reducing building-operations costs, largely through “green” initiatives  (see related story on page 11) that improved energy efficiency, Soehren says.

Buoyed by the rebound in business in the last two years, Kiemle & Hagood added 1,800 square feet of space to its corporate offices earlier this year, bringing its total space to nearly 11,000 square feet on the fourth floor of the high-rise building at 601 W. Main.

“We were completely out of space,” Soehren says. “We opened up enough space to add a few more people.”

Today, Kiemle & Hagood’s staff and brokers total around 140 people, 60 of whom work in its corporate offices. Kiemle & Hagood also manages the 15-story building on Main, which the company moved into when it opened in 1974.

Soehren describes 2013 as a bread-and-butter year for Kiemle & Hagood. “I don’t recall that we had mega-deals,” he says. “We had normal-sized deals happening, but many more of them.”

Last year’s volume equated to $110 million of value in sales and leasing, Soehren says. Of that, 60 percent came through leasing.

All sectors of Spokane’s commercial real estate market, including retail, office, and industrial, are in a recovery mode, he says.

“We would call it stabilizing, but I think there’s room to grow,” Soehren says.

The company opened its Coeur d’Alene office in 2008 at 2065 W. Riverstone Drive, in the Riverstone development.

“We’re seeing growing activity in property-management and brokerage services in Riverstone and throughout Kootenai County,” he says.

Over the last 12 months, Kiemle & Hagood has added three new brokers at its Coeur d’Alene office.

“Our activity there went up significantly. With eight people working in the office, we expanded that space as well.”

He says Kiemle & Hagood also saw an uptick in business in Walla Walla and the Tri-Cities, where the company has been involved in some sales and lease transactions, but doesn’t yet have offices.

“I can see us someday entering that market” with a permanent office, he says. “But it’s not imminent.”

He says 2013 also was an especially big year for his development concerns, which acquired Painted Hills Golf Course, in Spokane Valley, and broke ground on the Regal Plaza retail complex on the South Hill, which will be anchored by the Target store currently under construction.

Separately from the Target store, Dave Black Properties LLC is developing four other commercial structures in Regal Plaza valued at a combined $2.8 million and with a total of 38,000 square feet of commercial space.

He says PetSmart, the Phoenix-based pet-supply chain, has agreed to lease a 12,000-square-foot space in a building under construction at 4919 S. Regal, which is in the southwest corner of the Regal Plaza Development.

Café Rio, a Salt Lake City-based Mexican restaurant chain, has agreed to lease a 3,000-square-foot space in one of two multitenant retail buildings under construction at the southeast corner of the Palouse Highway and Regal Street, north of the PetSmart building.

Black says PetSmart and Café Rio will occupy their respective spaces about the time the Target store opens in Regal Plaza, which is expected to be in July. He says he expects other tenants, who he declines to name for now, also will open in Regal Plaza about the same time as Target.

As for 2014, Black says he expects to see strong growth in the brokerage side of NAI Black.

“We have the best crew we’ve ever had, and most of our people are producing very well,” he says.

Soehren says he expects profits at Kiemle & Hagood will be flat to moderately higher this year.

“Generally the economy is on an upswing,” Soehren says. “A Spokane-type upswing isn’t going to spike, but it’s moving in the right direction and confidence is up.”

He says the company is busy now, though. “We just hired a new property manager because that side is still growing.”

“People are now ready to add more office space,” he says. “There’s opportunity in that market.”